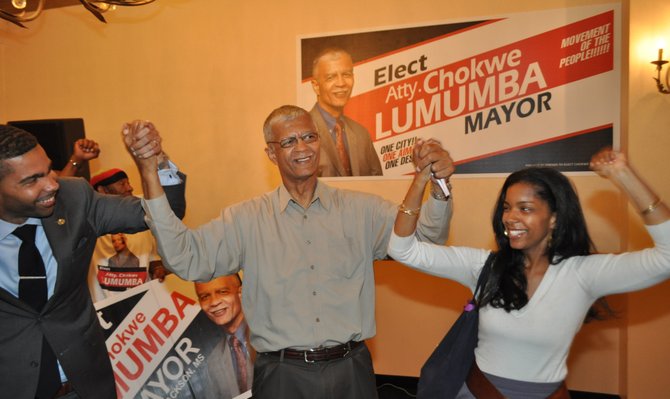 Chokwe Lumumba was a father figure to many more people than his biological children, Rukia (right) and Chokwe Antar (left). Until his death, Lumumba was a mentor to dozens of young activists over the years. Photo by Trip Burns.

Sometimes, Adofo Minka, a 27-year-old law clerk with Lumumba, Freelon & Associates, would drive his boss, Chokwe Lumumba, to court appointments around the state. On those long car rides, the men discussed law, black nationalism, the meaning of Malcolm X and the responsibilities associated with having a family.

"The brother, he was real open," Minka said.

Minka had relocated to Jackson in 2012 after graduating from law school in St. Louis with his now-wife, Shanina Carmichael. Before the move, Lumumba, who was a member of the Jackson City Council at the time, invited the couple to his home and gave them a tour of Jackson, including a home once owned by the Republic of New Afrika of which Lumumba was a member and the site where police killed two Jackson State University student protesters in 1970.

Lumumba, a Detroit native, had come to Jackson in the early 1970s as young activist and moved his family here permanently in the '80s. Over the years, Lumumba and Malcolm X Grassroots Roots Movement, which he founded, have quietly recruited dozens of young social-justice-minded people to Jackson. People come—and go—for their many reasons. But often, those reasons involve training under Lumumba, whom many youngsters called "baba," a Swahili word for father.

"I wanted to be a lawyer, and who is greater to learn from than this man who has struggled 30, 40 years for human rights on behalf of people?" Minka said.

In fact, Lumumba was a living, breathing history lesson, especially for up-and-coming human-rights attorneys interested in understanding the relationship between the fight for civil rights and American-style justice and fighting it out in courtrooms.

"As a young lawyer, he was someone I wanted pattern myself after because he was the movement attorney who had taken on cases that some of us had read about—people who put their lives on the line for black liberation struggles, Chokwe Lumumba represented those people," said Kamau Franklin, a New Yorker who came to Jackson in 2011 with his wife, Edget, to manage Tyrone Lewis' bid to become Hinds County's first African American sheriff.

Lumumba represented defendants in the 1981 Brinks armored-car robbery, organized by a group called the Black Liberation Army. Lumumba's clients also included Assata Shakur, who remains exiled in Cuba, Assata's nephew Tupac Shakur, a hip-hop star who was murdered in 1996, as well as Mississippi's Jamie and Gladys Scott. The Scott sisters became an international symbol for the injustice of U.S. courts when they were convicted and sentenced to life imprisonment for an armed robbery that netted a small amount of money, just $11 by some accounts.

Chokwe Antar Lumumba, Lumumba's son, said few people ask or understand why his father moved his family to Deep South in the late '80s. "My father came here for the sole purpose of doing work," Chokwe Antar told the Jackson Free Press in a telephone interview.

The late mayor, who described himself as "a hell of a lawyer," never lacked self-confidence and possessed a stubbornness that led to numerous contempt-of-court citations when he pushed back against judges he believed were railroading his clients—leading to attempts to disbar him. Yet, in his behind-the-scene dealings with his staff, Lumumba's ego took a backseat to his desire to motivate and inspire the people around him.

C.J. Lawrence, a Lumumba family friend, says he was surprised when Lumumba asked him to manage social media for Lumumba's 2013 mayoral campaign. Later, after Lumumba won election, Lawrence joined the administration's communication staff as director of marketing, where he also manages the city's Facebook, Twitter and Instagram accounts.

In that role, Lawrence, along with interim communications director Jewell Davis, public information officer Chris Mabry and policy director Walter Zinn, made up the committee that spearheaded the recent one-percent local sales tax option referendum, which passed with more than 90 percent voter support in January. The tax went into effect March 1.

Leaving the fate of $300 million in revenue for street repairs in the hands of a 20- and 30-somethings might have been a huge roll of the dice and stymied Lumumba's agenda had the vote failed. But the way Lumumba seemed to look at it, these young people would lead Jackson one day; they might as well get acclimated to handling big, heavy decisions now.

"The confidence instilled in us drove us," said Davis, who had also been a public-information officer in Mayor Harvey Johnson Jr.'s administration. "These are highly stressful jobs, but because of the camaraderie among the colleagues, it really propelled us and motivated us."

Davis and Lawrence describe staff meetings, which Lumumba led along with his chief-of-staff Dr. Safiya Omari, as more akin to family dinner hour than a cutthroat boardroom. Lumumba's management style, they say, more closely resembled that of a mediator than a heavy-handed administrator.

"What Chokwe tried to do was balance what he saw was differing opinions. Unlike most elders who played leadership roles, Chokwe took the opportunity to listen to what you were trying to say whether you were young or new or someone who was trying to challenge the status quo, and he would try to incorporate that into a 'which way forward,'" Kamau Franklin said of his mentor.

In the wake of Lumumba's untimely death, the way forward seems murky as Jackson braces for a special election that could yield a new mayor, possibly one who does not share the vision of Lumumba and the young people he had been training to some day lead the city.

But finding a way forward after losing a charismatic leader has been the challenge throughout history, Adofo Minka said.

Jackson without Chokwe Lumumba will be different.

"When King was assassinated, that was the challenge—continuing to do the Poor People's Campaign. No one came out of Malcolm's camp. It was these guys in Oakland, Huey P. Newton and Bobby Seale (of the Black Panther Party). Even going back to biblical times if you look at the story of Jesus. I hope it's not the case, that the forces that have gathered around Chokwe are going to be vanquished, paralyzed because of his death," Minka said.

"But this man has impacted so many people so heavily you never know who's going to rise up out of the ranks."

The Mayor was a different type of politician the air felt different regarding politics in Jackson. I found it refreshing. He will be missed for the hope of a honest for the people politician he gave us.