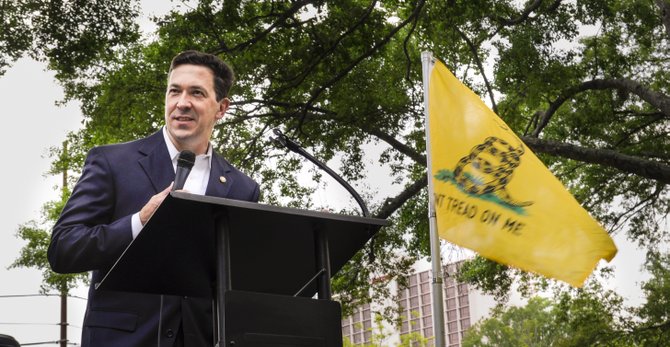 The poll shows McDaniel with a 3-point lead over Cochran, which is within the survey's margin and error, and provides some insight into the people who will pick the state's GOP nominee. Photo by Trip Burns.

Enthusiasm among an older and overwhelmingly white electorate has not waned in the Republican primary runoff for U.S. Senate, a Democratic polling firm finds.

Chism Strategies, which is headquartered in Washington, D.C., and has an office in Mississippi, conducted a statewide survey on Thursday, June 5—two nights after U.S. Sen. Thad Cochran and state Sen. Chris McDaniel finished in a virtual draw—of 832 households that participated in the past four Republican federal primaries.

"At this point in the race, supporters of both are energized and optimistic," the report states.

The poll also shows McDaniel with a 3-point lead over Cochran, which is within the survey's margin of error, and provides some insight into the people who will pick the state's GOP nominee. Calling only landlines, Chism Strategies got a sample that was 96 percent white and 90 percent over the age of 55.

Whether Cochran will be able to woo African American and other Democrats who sat on the sidelines in the June 3 election is an increasingly open question.

Former Mississippi Gov. Haley Barbour, a Cochran booster, told Politico last week that the Cochran campaign hopes to "expand the electorate" going into the runoff. Barbour, a congressional lobbyist who used his relationships with Washington, D.C., to bring funding back to Mississippi and win two terms in the governor's mansion before returning to his D.C. lobbying work, hinted that Mississippians would turn away from McDaniel if they understood what his anti-spending views would mean for the state's economy.

"People are going to know the differences between Cochran and McDaniel on policy, and one of the first ones is going to be federal spending on education. And I predict it will increase the number of people who vote in the runoff," Barbour told Politico.

Byron D'Andra Orey, a Jackson State University political science professor, said such a strategy represents a "conundrum" for Cochran. Partisan politics in Mississippi are inextricably tied to race, so white Republicans would view an explicit appeal to Democrats as an appeal to African Americans, Orey said.

"Mississippi is so polarized around race, any time you make an explicit appeal to blacks, you're going to lose white voters," Orey told the Jackson Free Press.