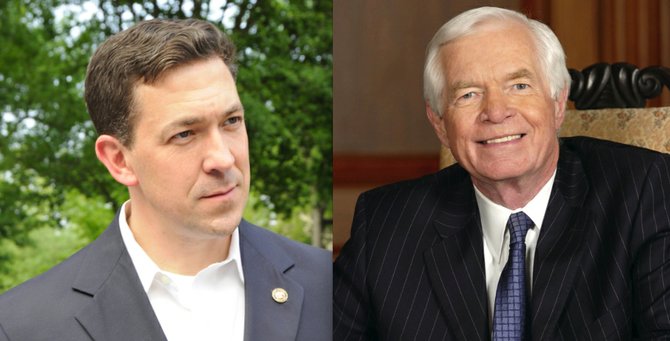 After coming in second place behind Chris McDaniel (left) by just 1,386 votes, Thad Cochran's base—which consists of establishment Republicans—is deflated and may not even show up for the June 24 runoff.

The conventional wisdom in the Mississippi primary for U.S. Senate is that state Sen. Chris McDaniel has the momentum going into the runoff against incumbent Sen. Thad Cochran.

The conventional wisdom also says that after coming in second place behind young firebrand McDaniel by just 1,386 votes, Cochran's base—which consists of establishment Republicans—is deflated and may not even show up for the June 24 runoff.

The conventional thinking is that at this point, the race is McDaniel's to lose.

Certainly, McDaniel defied odds laid out early on in the campaign when Cochran, a well-financed 40-year veteran of Congress, was mopping up the floors of Capitol Hill with his young opponent. A deluge of money from Super PACs helped McDaniel surge, and a series of high-profile, albeit bizarre, controversies in the final weeks helped generate local and national interest.

However, the Democratic primary between former U.S. Rep. Travis Childers and a field of relative unknowns, including former Republican Bill Marcy, was quiet. So quiet, in fact, that many Democratic voters stayed at home June 3.

Overall, just under 400,000 people participated in Mississippi's primary. Of that total, 313,484 people voted in the Republican primary, about half the number of Mississippians who voted for Mitt Romney in 2012. By contrast, the 84,339 Democrats who voted in that party's primary are only 15 percent of people who voted for President Barack Obama in the same election.

The votes are there for the taking. Democrats who sat out of their own primary are up for grabs and could give either McDaniel or Cochran a decisive victory on June 24 because state law allows voters to participate in runoffs even if they did not vote in the regular election. People are not allowed to switch their party affiliation, however, so people who voted in the Democratic cannot vote in the runoff. All others can.

Both campaigns are hunkering down as they go into the three-week-long election cycle. Republicans huddled Thursday over the slow-motion showdown of the Mississippi Senate runoff. Cash, campaign help and advice flowed into a titanic clash of the factions splitting the GOP.

On Thursday afternoon, Cochran promised a fight throughout the campaign.

Told that the conservative Club for Growth, which spent $2.5 million backing McDaniel before the primary, had called for him to drop out, Cochran laughed. "Whoa," he said after a stop at a Raytheon Co. facility about 50 miles east of Jackson. "They can relax. ... I have no intention of dropping out. I have every intention of winning the election."

Alongside him was Stuart Stevens, a top strategist for Mitt Romney's failed presidential campaign in 2012. Romney hasn't endorsed Cochran, but Stevens' presence was another reminder that Cochran has run as an establishment Republican, backed by the national party's Senate campaign committee and the U.S. Chamber of Commerce, among others.

McDaniel and his supporters maintain that those associations are Cochran's greatest liability and make it impossible for him to win over conservatives who are angry about the nation's direction.

"Sen. Cochran has had five decades in Washington, and it's clear that six more years of the same won't have any impact on the direction of our country," Club for Growth President Chris Chocola said in calling for Cochran to drop out of the June 24 runoff.

"The message to them is: 1,300 votes," FreedomWorks President Matt Kibbe said in an interview in his Washington office, referring to Tuesday's margin. "Insurgents win on the ground."

FreedomWorks spent about $350,000 in the primary, and Kibbe promised more. The group's biggest efforts will be on voter turnout. FreedomWorks has ordered 20,000 more yard signs and another 40,000 pro-McDaniel fliers to leave at voters' doors. The group plans to keep its volunteers and organizers in the state for the runoff. And an eight-city bus tour is scheduled for next weekend. McDaniel lost six of the nine counties that hold those cities; Hattiesburg straddles two counties.

Kibbe said the message will stay focused on Cochran's role in Washington.

"The people that we're fighting with are self-anointed Republican strategists whose day jobs (are) lobbying," he said.

It was a not-so-subtle jab at Haley Barbour, the former national GOP chairman and two-term Mississippi governor who, along with several of his family members, is backing Cochran. After leaving the governor's office in 2012, Barbour returned to the Washington-based lobbying shop he founded.

Barbour has repeatedly warned Republicans that nominating doctrinaire conservatives leads to general election losses in winnable races, such as the GOP's Senate losses in Nevada and Delaware in 2010, followed by Indiana and Missouri in 2012. For the most part, Republicans have steered clear of tea-party-aligned candidates this year, intensifying the movement's focus on McDaniel.

Cochran, who once said he didn't "know a lot about" the Tea Party, said he would reach out to all voters, including African Americans and Democrats.

"Voting rights has been an issue of great importance in Mississippi," he said, adding, "I think democracy works better when all people participate."

Out of Mississippi's 1.9 million registered voters, only the 85,000 who cast Democratic primary ballots Tuesday are ineligible to vote in the GOP runoff.

The senator's supporters, meanwhile, continue to paint the McDaniel team as extreme, using as their latest argument that one of McDaniel's staffers and two companions went to a county courthouse in Jackson long after officials had finished counting ballots for the night. Janis Lane, a Central Mississippi Tea Party leader, said she went only to observe ballots being counted, but she and her companions—including Scott Brewster, coalition director for the McDaniel campaign—ended up locked inside the Hinds County Courthouse after entering around 2 a.m.

The Hinds County Sheriff's Office said late Thursday afternoon that it had completed an investigation of the incident and found no criminal wrongdoing.

The McDaniel campaign already has to distance itself from supporters who have been arrested on charges that they plotted to illegally take photographs of Cochran's wife, Rose Cochran, who has dementia and has lived for 13 years in a Mississippi nursing home.

Hello. I would simply like to compliment the Jackson Free Press on the quality and even-handedness of the reporting and writing on the Cochran-McDaniel race. Your readers are well served.
I have been following this race carefully and wrote an op-ed column for The Huntngton Herald-Dispatch (West Virginia) on this subject. 6/3/2014. Look forward to staying current via your coverage.

I've just received a post card ad from the Chris McDaniel campaign criticizing Thad Cochran for essentially NOT sacrificing himself and more importantly, his staff in a Republican contrived stunt to make it difficult for senators to vote for the Affordable Care Act (Obamacare) by adding themselves and their staffs to the health exchanges, but taking away the government's ability as their employer to opt as it had been doing, to pay for 75% of it. That would have shot a hole through staffers budgets. This is the McDaniel way, to sacrifice anything and anyone as long as it is not him, to get either what he wants on his conservative agenda, or to make sure that nothing gets done.

What I would really like to ask Ricky Cole, my Chairman, is why oh why, did he choose and support a one-term, Blue-Dog Democrat that when the important votes are taken will not be there? We need a reliable, thinking, working, progressive Democrat for Mississippi in the Senate, not somebody who was so afraid of losing his seat, he might as well have been a Republican.

While Thad Cochran is a Republican and he and I differ on a number of issues, why would the people of Mississippi give a Senator with that much seniority and who has done so much for our state, especially after Hurricane Katrina the "boot." I call on all Democrats and Independents who have not voted in the Democratic primary to Vote in next Tuesday's primary for THAD COCHRAN.

I just received an email from Ricky Cole, Chairman of the MS Democratic Party, to his members that states that MS law in black letters says that each voter in a primary election must have the intention of voting for that person they choose in the general election. Come on, Really? Every election in every state is by SECRET ballot, and Mississippi has an open primary system (by law and custom). The Chairman is trying to force and hustle a choice--back room politics. Vote for Thad Cochran even if you are Democrat and did not vote in the Democratic primary. No one can dictate how you cast your vote.