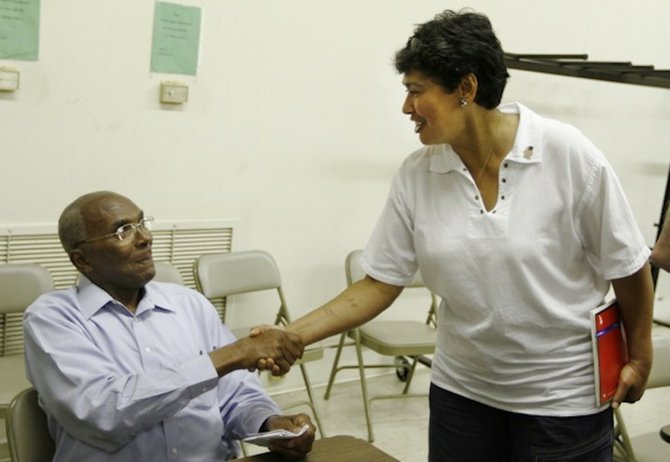 Mercedes Ricks, an alderwoman in Magnolia, is the state’s only openly gay public official, but a movement is under way to change that. Photo by Courtesy Enterprise-Journal (McComb, MS)

With black folks playing the spoiler in the Mississippi Republican Senate primary, bucking many traditional notions about how politics work in the Magnolia State, gay, lesbian, bisexual and transgender people are making a political play of their own.

Founded in 1991 and organized as a political-action committee, the nonpartisan Victory Fund provides training and other supports to LGBT candidates. To take advantage of the fund's programs, candidates have to be openly LGBT, support reproductive freedom, have community support and be viable.

Those resources include access to the fund's political strategists, which is like getting free political consulting, as well as the group's network of financial donors, including some of the nation's largest corporations and foundations.

The Victory Fund is focusing on 10 states that have no openly LGBT members of their legislatures, but are recruiting candidates from local boards and commissions on up. This spring, an openly gay man named Marco McMillan was found dead while running for mayor of Clarksdale. Currently, Mississippi has only one public official who is out—Mercedes Ricks, an alderwoman in Magnolia.

Ricks, a native of Colombia and a business owner, helped Magnolia (population 2,420) pass one of eight equality resolutions around the state, including Jackson, which passed an anti-discrimination ordinance in early June. Statewide support for LGBT community members has congealed around opposition to a new state law that took effect on July 1, the Religious Freedom Restoration Act.

When proposed in the Legislature, the RFRA proposal stirred fervent debate between its supporters and civil-liberties groups who believed the bill would lead to legal anti-gay discrimination. After the bill passed, albeit modified from its original form, the Human Rights Campaign announced a plan to hang out shingles in Mississippi and other southern states to lobby for equal-rights protections.

The Victory Fund is hoping to harness that energy to get a handful of LGBT candidates on ballots in a year or two. On their recent swing through Mississippi, Leeds and the fund's political director, Jason Burns, met with several potential candidates whom they declined to identify.

"If you're not intimidated going into it, you're probably underestimating what's needed" to win elected office, especially if you're LGBT, Burns said.

The prospects are a little less intimidating if you consider the Victory Fund's track record. In 2006, the fund got involved when the Alabama Democratic Party tried to toss an openly gay candidate for state House of Representatives named Patricia Todd, of Birmingham, off the ballot. The fund called in the big guns, getting former presidential candidate and Democratic National Committee Chairman Howard Dean and pumping $100,000 in lawyers' fees on Todd's behalf.

They succeeded in getting Todd back on the ticket and, since her election, the Victory Fund boasts that no anti-equality legislation has been debated on the Alabama House floor.

Over the years, the fund has endorsed 150 candidates for office and all but five have been Democrats—four were Republicans, and one is an independent—but Leeds and Burns say they would like to meet with Mississippi Republicans.

They are also planning more outreach to the transgender communities and LGBT communities of color. Laurie Bertram Roberts, a social-justice activist and Jackson Free Press columnist, said with Mississippi's nearly 40 percent African American population, it's critical to seek out LGBT candidates beyond gay, white, cisgender, middle-class men. ("Cisgender" is the opposite of transgender.)

"Clearly we're here, and some of us would be viable candidates," said Roberts, who is bisexual.

Roberts declined to say if she is contemplating a run for public office, but believes that Jackson, once named home to the nation's most same-sex couples raising children, is a natural launch pad for the political career of an LGBT person.

"We're the biggest city, we're the capital city. To be honest, I'm surprised that no one has run in Jackson," she said.

Hill, who is gay, grew up in Mississippi and has led as the pastor of Broadmeadow United Methodist Church in Jackson for nine years. "No matter what, we are all God's children," Hill said. "Even though we disagree on various issues, our values in the Magnolia State teach us to love everyone."— Anna Wolfe