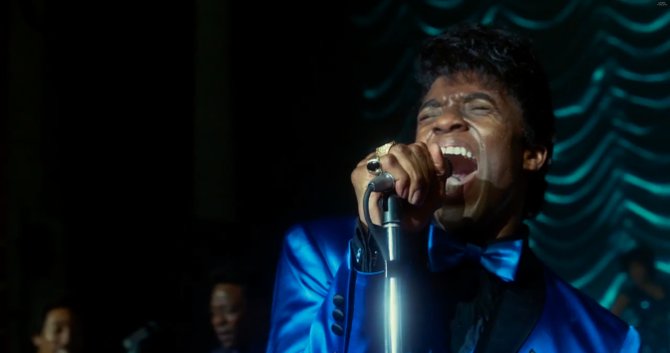 “Get on Up” will highlight the life of James Brown, from his childhood to his rise to fame.

After a May and June filled with mega-budgeted flicks, it appears Hollywood will tap the action brakes a bit. The remainder of the summer season sizzles with variety; movies of all genres are heading our way. The following is a July/August melting-pot sample that I hope won't disappoint.

"Dawn of the Planet of the Apes" premiered July 11. The anticipated sequel to the rebooted franchise is stirring with overwhelmingly positive buzz. If computer-generated talking apes isn't your thing, consider the storyline for a moment. After a global virus decimates the human race and, by contrast, apes massively populate, the two co-exist while each struggles through internal conflict and insurgencies that push for war, and test their instincts to rule by survival. Watch the film's trailer—it's fantastic.

"Lucy" premieres July 25. Scarlett Johansson plays the title character, who is set on a path of revenge against those who nearly killed her. The plot is rather, shall we say, different. From a substance surgically implanted into her abdomen, Lucy obtains the ability to maximize her brain's potential, which pretty much gives her super-human powers. If it weren't for Johansson and writer and director Luc Besson, the film would have more than its fair share of skeptics. But since Besson brought us the classic, "Leon: The Professional," and the sequel-spurring smash hit, "Taken," I'm sold. Not to mention, Morgan Freeman plays a role in the film.

"A Most Wanted Man" surfaces, in limited release, on July 25. With what could be the summer's most eye-catching cast, the film centers on a Chechen Muslim who illegally immigrates to Hamburg, Germany, where he gets caught up in the international war on terrorism. It's based on the novel of the same name by author John le Carre, who also wrote the impeccable and eerily slow novel-turned-film "Tinker Tailor Soldier Spy." The late Philip Seymour Hoffman, in one of his last performances, plays a multi-layered, high-ranking German spy official. All the ingredients are present for a success, so I'm optimistic this will be one plot-twisting, chilling thriller.

Marvel's newest comic franchise "Guardians of the Galaxy" launches Aug. 1. In distant space, American fighter pilot and outlaw Peter Quill, played by actor Chris Pratt, is on the run from interstellar villains after stealing their coveted orb. Upon finding out just how powerful the orb is, he bands together like-minded misfits in hopes of saving the galaxy from destruction. Per the film's trailer, it appears it will be rather comical.

"Get On Up" gets down with the competition on Aug. 1. Mississippi native Tate Taylor, who crushed the box office with 2011's "The Help," directs this filmed-in-Mississippi biopic of the music revolutionary, which stars Chadwick Boseman as James Brown. The film covers the star's childhood, rise to stardom, depths of failure and road to recovery; you will see the world of James Brown inside and out.

"When the Game Stands Tall" emerges Aug. 22. Jim Caviezel plays Bob Ladouceur, a football coach who took his De La Salle High School team from utter obscurity to a record-shattering 151-game winning streak. After a devastating loss on the field, the lives of players, their families and even Coach Ladouceur come unraveled and are severely tested as everyone digs deep down for courage to carry the team back onto the field and find personal health and happiness again.

Just in time for back-to-school, the movie will be one of those bright lights of humility and motivation that Hollywood occasionally grants the masses. In my opinion, we desperately need more of these. I'm not sure how film snobs will treat it, but I have no doubt that the movie will resonate with everyday folks and at the box office.