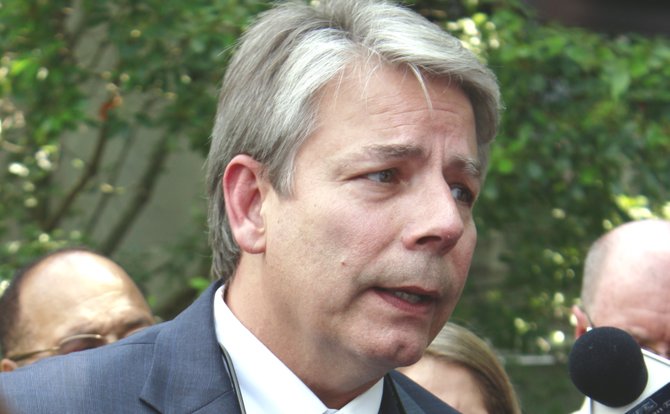 M itch Tyner, an attorney for the campaign of state Sen. Chris McDaniel and a former Republican gubernatorial candidate, believes more than enough questions exist to contest the outcome of the Republican primary for U.S. Senate.

On July 7, at the Hinds County Courthouse, an attorney for the Chris McDaniel U.S. senatorial campaign said he is confident that enough ineligible votes were cast to swing the outcome of the June 24 Republican primary run-off.

"We don't have to have 6,700 (ineligible votes to challenge the election); however, I would be surprised if we don't find 6,700," attorney Mitch Tyner said. He did not offer a specific number, but said the campaign has found "thousands" so far, although no specific number is required to file a challenge.

Tyner sent the campaign's gratitude to "over 50 counties that bent over backwards ... to help us gather information on eligible voters," indicating that not all counties were so helpful to the effort to ensure Cochran won fairly and squarely. He said the campaign has examined contents of ballot boxes in upwards of 70 of the state's 82 counties so far. Last week, McDaniel offered a $1,000 reward for information about fraudulent voting.

Tyner said in an interview after the press conference that other allegations of fraudulent voting practices, like the exchange of money for votes, have been reported to authorities.

The attorney ran against Haley Barbour in the 2003 Republican gubernatorial primary—a move many believed was a political trick by the Democrats so that Tyner could wage a tougher campaign against Barbour than incumbent Democratic Gov. Ronnie Musgrove could. During the campaign, the Barbour camp sent out a missive calling his opponent the "Liberal Trial Lawyer and Democrat-Lover Mitch Tyner."

"A victory for Chris McDaniel is a loss for the reputation of this state for race, for race relationships between blacks and whites and other ethnic groups," the ad states.

NRSC reported spending $175,000 for National Media Research Planning and Placement with the Federal Election Commission, although no ads have been attributed to NRSC.

On American Family Radio's Focal Point with Bryan Fischer, Shaftan charges that All Citizens for Mississippi has not filed FEC financial reports, so it appears NRSC might have funded the controversial ads.

Even though some state Democratic voters turned out for Cochran in the run-off after a last-minute push to woo them to the polls, many in the party are behind McDaniel's push to review the election.

"This election has already provided more than its share of tragic and bizarre stories. Now, the specter of election fraud has been raised," former state Rep. Brandon Jones wrote in a statement last week.

Jones, now the director of the Mississippi Democratic Trust, continued: "The citizens of this state were sold a package of voting laws by leaders who told us that their main concern was election integrity. These leaders, like Secretary of State Hosemann, now have an opportunity to show that all the talk about protecting the vote wasn't politics as usual. Because election integrity laws should never be enforced selectively based on party, we call on ... Hosemann and local law enforcement officials to treat these allegations with the seriousness they deserve."

Additionally, the head of the Mississippi Democratic Party is charging that the state Republican Executive Committee failed to have Democratic poll books on hand during the June 24 Republican Party runoff to ensure that voters didn't illegally cross party lines to vote.

"It was our understanding from some of our folks who worked in the Hinds County elections that the Republican poll workers on the 24th didn't have the Democratic books from the 3rd, so they didn't have any way of knowing," Cole told the Jackson Free Press Tuesday.

If the books weren't in the precincts, poll workers had no way of determining whether voters had originally voted in the Democratic Primary—the only registered Mississippi voters who are ineligible to vote in the runoff.

Sen. Chris McDaniel's senatorial campaign is currently reviewing ballot boxes in counties around the state to ensure the validity of election results in the June 24 run-off against U.S. Sen. Thad Cochran.

Reached the evening of July 7, Hinds County Republican Executive Committee Chairman Pete Perry denied Cole's charge about the poll books, calling it "a damn lie." He charged that Claude McInnis "made up" the charge that the GOP did not provide the poll books. McInnis, the election coordinator of the Hinds County Democratic Executive Committee, could not be reached for comment Monday.

Rickey Cole leads the Mississippi Democratic Party and has his own doubts about the way Republicans handled their primary election.

However, he told Breitbart News earlier that Perry asked him and other Hinds Democrats to skip "switching the books"—meaning to give the Democratic poll books to the Republicans for checking purposes.

McInnis also said he personally checked to make sure the books were being used. "I went out to a precinct to make sure the laws were being followed, and I got there at about 4 o'clock p.m.," McInnis told Breitbart. "They had not switched the books, under the influence of the young Republican and Democratic workers there. I demanded that they switch these books immediately. The Democratic poll manager there switched the books at 4 o'clock that evening."

McInnis did not respond to messages from the JFP on the evening of July 7 and the morning of July 8.

"I know that everything that Claude McInnis said in his interview with Breitbart was not just a lie, everything he said was a damn lie. He made that up. ... He (McInnis) wouldn't know an honest election if he saw one," Perry said.

" ... The election in Hinds County was running proper. It was fine. We had 500 poll workers around the county working in 118 precincts, and they were doing their job."

"The numbers they have are bogus, and they just use them to try to raise money to help pay off campaign debts," Perry added about the Democrats.

McDaniel campaign attorney Mitch Tyner said Tuesday that he will not be surprised to find 6,700 ineligible votes, due to party crossover in the run-off, roughly the number Cochran claimed victory by in the runoff.

Cole said he thinks McDaniel's challenge is warranted due to these irregularities, especially if there were enough ineligible votes cast to compromise the election result.

The Democratic chairman also said that, while he doesn't have proof, he is aware of allegations that Republican operatives paid for votes for Cochran. He added that the operatives allegedly "were from the old school of people who traditionally had done some vote buying, but I don't have any direct evidence."

The Democratic Party head agreed with McDaniel attorney Tyner about the inconsistencies and opportunities of fraud that come with absentee ballots. "Absentee ballots are the biggest headache in the conduct of any election," Cole said.

"If the steps aren't followed exactly right, then the ballot has to be rejected, and again that's handled by the Republican Executive Committee in these counties, and if they're handling it poorly or sloppily or not in keeping with the law, then there's the potential for 19,000 to 20,000 votes that weren't properly handled," Cole said.

Ultimately, cross-party votes can be attributed to the fear that Cochran's campaign instilled in Democratic voters, he said.

"The vast majority of Democrats who voted in the Republican run-off will tell you they weren't voting for Thad Cochran; they were voting to stop Chris McDaniel, because he frightened them," Cole said.