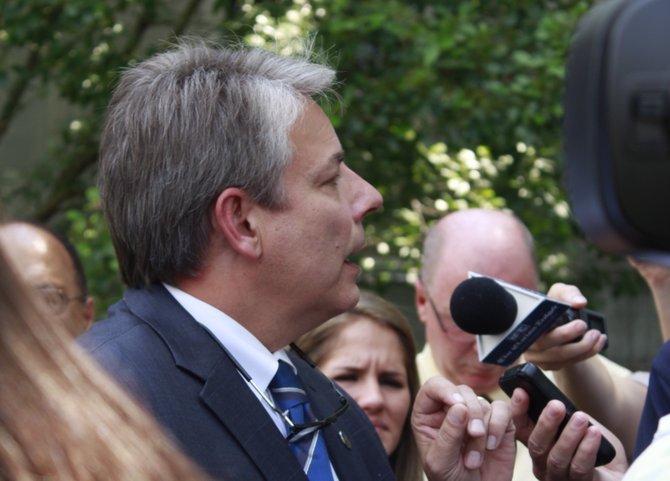 Attorney Mitch Tyner said the McDaniel campaign is viewing the contents of all ballot boxes at every courthouse to determine how many ineligible voters voted in the runoff to help tip the scales toward incumbent Sen. Thad Cochran.

The Republican primary for U.S. Senate is officially over—except it's not quite over.

This week, the Mississippi Republican Party certified U.S. Sen. Thad Cochran the winner over challenger state Sen. Chris McDaniel by a total of 7,667 votes, according to information the state Republican Party submitted to the Secretary of State on Monday, the legal deadline.

McDaniel, a state senator from Ellisville, has said he intends to challenge his loss. He said he believes that possibly thousands of voters cast ballots in both the Democratic primary and the Republican runoff, which is illegal. He has not released any documents to support his claim.

An attorney for the Chris McDaniel U.S. senatorial campaign said he is confident that enough fraudulent votes were cast to swing the outcome of the June 24 Republican primary run-off.

"We don't have to have 6,700 (ineligible votes to challenge the election); however, I would be surprised if we don't find 6,700," the attorney, Mitch Tyner, said. He did not offer a specific number, but said the campaign has found "thousands" so far, although no specific number is required to file a challenge.

Tyner sent the campaign's gratitude to "over 50 counties that bent over backwards ... to help us gather information on eligible voters," indicating that not all counties were so helpful to the effort to ensure Cochran won fairly and squarely. He said the campaign has examined contents of ballot boxes in upwards of 70 of the state's 82 counties so far. Last week, McDaniel offered a $1,000 reward for information about fraudulent voting.

"It is imperative that an ineligible voter not be excluded from this, because when I vote and there's an ineligible voter that also votes, he dilutes my vote. He dilutes your vote," Tyner told reporters. Tyner said in an interview after the press conference that other allegations of fraudulent voting practices, like the exchange of money for votes, have been reported to authorities.

The Jackson-based attorney isn't a stranger to tough Mississippi politics.

Tyner ran against Haley Barbour in the 2003 Republican gubernatorial primary—a move many believed was a political trick by the Democrats so that Tyner could wage a tougher campaign against Barbour than incumbent Democratic Gov. Ronnie Musgrove could. During the campaign, the Barbour camp sent out a missive calling his opponent the "Liberal Trial Lawyer and Democrat-Lover Mitch Tyner."

In a later interview, Mississippi Democratic Party Chairman Rickey Cole dismissed the notion that his party had put Tyner up to run against Barbour in 2003.

"Mitch has as good a Republican pedigree, as any of the Barbours do," Cole said.

Tyner handed out language from a 1954 Mississippi Supreme Court decision, Sartin v. Barlow, that established the right of political candidates to review election materials, including ballot boxes and their contents, to discover "any wrong or fraud or thievery" of votes.

"We're following up all leads," Tyner said, in order to protect the integrity of the vote. He added that he was surprised "at the amount of irregularities" they had found already.

"I believe it was (Hattiesburg) Mayor (Johnny) DuPree who said, 'There is no way that voter ID is going to stop much fraud in Mississippi.' In fact, he said, 'If you want to stop fraud in Mississippi, you need to get on top of absentee ballots,'" Tyner said.

As the press conference unfolded, the campaign for Sen. Thad Cochran sent out a statement countering McDaniel's efforts.

"We have representatives at all 82 courthouses today to monitor the review of ballot boxes and have been pleased with the results," the email read.

"The county-by-county results reported thus far are revealing an extremely low number of crossover votes from the June 24th election. As the process moves forward, the conversation is shifting from wild, baseless accusations to hard facts."

Even though some state Democratic voters turned out for Cochran in the run-off after a last-minute push to woo them to the polls, many in the party are behind McDaniel's push to review the election.

"This election has already provided more than its share of tragic and bizarre stories. Now, the specter of election fraud has been raised," former state Rep. Brandon Jones wrote in a statement last week. Jones is now the director of the Mississippi Democratic Trust.

Jones continued: "The citizens of this state were sold a package of voting laws by leaders who told us that their main concern was election integrity. These leaders, like Secretary of State Hosemann, now have an opportunity to show that all the talk about protecting the vote wasn't politics as usual. Because election integrity laws should never be enforced selectively based on party, we call on Secretary Hosemann and local law enforcement officials to treat these allegations with the seriousness they deserve."

Under state law, McDaniel would first have to file any challenge with the Mississippi Republican Party executive committee. He could file a lawsuit seeking a new election 10 days after that.

"As the process moves forward, the conversation is shifting from wild, baseless accusations to hard facts. As we have said from the beginning, the runoff results are clear: The majority of Mississippians voted for Senator Thad Cochran."

The Republican nominee will face two candidates in the Nov. 4 general election: Democratic former U.S. Rep. Travis Childers and the Reform Party's Shawn O'Hara, who has run unsuccessfully for several statewide offices over the past 23 years.

As we have said from the beginning, the runoff results are clear: The majority of Mississippians voted for Senator Thad Cochran.

Well, that certainly isn't true. One could say, perhaps, that the majority of Mississippians who voted in the run-off voted for Senator Thad Cochran, which seems accurate, regardless of whether they were eligible to vote in the run-off or not.

But, technically speaking, only about 7% of Mississippians voted for Thad on run-off night. ;)

The needed majority voting in the run-off election (51%) voted for Thad Cochran to represent them in the U.S. Senate again. There is no provision in Mississippi election law to reverse an election. The only judicial relief that could be granted would be a new election, and I seriously doubt McDaniel would find a judge in Mississippi who would grant that.