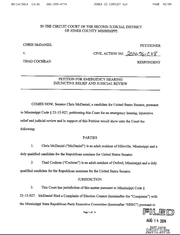 JACKSON, Miss. (AP) — A tea party-backed candidate asked a Mississippi court on Thursday to declare him the winner of the June 24 Republican runoff against incumbent U.S. Sen. Thad Cochran or order a new election.

State Sen. Chris McDaniel sued Thursday in state court in his own home of Jones County. The Mississippi Supreme Court will appoint a special judge to handle the case, though it would be unprecedented for a court to order a do-over of a statewide election.

Certified results of the June 24 runoff show Cochran defeated McDaniel by 7,667 votes. But McDaniel says his campaign found thousands of irregularities, including about 3,500 people who voted in the June 3 Democratic primary and June 24 runoff. Mississippi voters don't register by party, but such crossover voting is prohibited.

McDaniel has criticized Cochran for reaching out to black voters who traditionally support Democrats. Turnout increased from the primary to the runoff, and Cochran fared well in many majority-black precincts.

McDaniel began his challenge with a complaint to the Mississippi Republican Party executive committee on Aug. 4, asking the group to declare him the winner over Cochran.

State GOP chairman Joe Nosef said Aug. 6 that the committee would not consider the challenge because it did not have time to thoroughly examine the information McDaniel provided about alleged voting irregularities. Thursday marked the deadline to file a lawsuit challenging his loss.