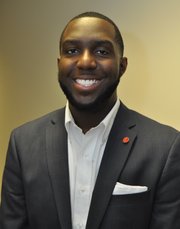 As I reached out to introduce myself to Dr. Robert Parris Moses Jr. on June 2, I realized there was something more to our traditional greeting. Dr. Moses' eyes said more than, "Pleased to meet you." He grasped my hand for what seemed to be just a second or so longer than he had the other individuals I accompanied to hear him speak.

As we made eye contact, I understood his silent gesture toward me.

Even if he did so unintentionally, Dr. Moses' eyes communicated to me that something in his heart and mind wanted me to comprehend. In the short glance we made toward each other, I felt that he truly hoped that the wisdom he had outlined that afternoon would stick with me; whether it was the history of the United States Constitution and how people used its articles to mask their prejudices and warrant their oppressive behaviors; the confidence, self-respect and self-determination to demand and exercise every right promised to me; or stepping up to the task of defending those citizens I encounter who are deprived of their own rights and educating them of their importance so that they can find the strength to fight for themselves.

As a black male opening the doors of adulthood, I would need each.

This was the first day of my own "Freedom Summer." Fifty years after African Americans in Mississippi and numerous supporters of their efforts organized and demonstrated on behalf of their right to vote in 1964, I traveled to the Jackson area seeking a very different type of independence—a personal independence that coincided with my 21st birthday in mid-June. I was in a new place with new challenges and a completely new cast of characters.

I expected to fall in love with Jackson and the nights filled with memories I could barely remember. I wanted this summer—the summer before my senior year in college—to be a celebration of young adulthood.

Family members, friends, and colleagues who have lived in and frequented the area told me about Jackson. With the bits and pieces I gathered through my three years in Mississippi, studying among Jacksonians at Ole Miss and reading about the area, one major feature never quite struck me until I was able to exist among it.

Jackson, sincerely, is the blackest place I've ever seen.

A popular narrative in history paints the picture of Mississippi as the center of black suffering in America; however, when I explore the downtown area, read news headlines, attend city council meetings, report on stories, and bump elbows with the movers and shakers of this city, I find that somewhere in that narrative is a story of black redemption.

In the wake of the death of a revolutionary mayor with a beautiful black last name, the election of a charismatic young, fresh, black political face in the local executive branch, and the on-going celebration of a dense and rich local African American history, Jackson, Miss., has set the stage for my personal development with black awareness and activism acting as the cornerstone to that transition, much like it is the cornerstone of this community.

The sweetest part is that the story doesn't stop there. There is an LGBTQ redemption, a human-rights redemption and many other stories that have yet to be told. People on one corner are having conversations about gender, and advocates down the street are lobbying for adults with special needs. I have found a plethora of interesting forums in which to insert myself.

Recently, the Jackson Free Press ran a Freedom Summer issue (Issue 41, June 11-17, 2014) that highlighted a moment of the past that defines society today. Where that newspaper issue ends, this issue aims to press forward. Freedom Summer's 50th anniversary festivities are drawing to a close, but the future is at the feet of those young change-makers who aim to learn from its successes and apply them to the needs in their communities. The pages of this book are dedicated to honoring those who have already accepted the obligation of action and who inspire the minds of others who have yet to answer the call.

When I was younger, my pastor used to say that change could only be made when the wisdom and experience of the older generation mend with the energy and curiosity of the younger generation. In the month that I have been in Jackson, I have had the honor of meeting a few veterans of the Civil Rights Movement, such as James Meredith and Rita Schwerner Bender, reconciling my young energy and curiosity with their wisdom and experience.

I sat just feet away from the man who, in 1963, bravely trotted up the stairs of a university lyceum, colloquially referred to as "The Big House." It sits in the middle of campus, complete with big ornate columns meant to imitate the appearance of a plantation master's living quarters.

Footage of Meredith's heroic feat very often brings me to tears when I realize that I pass by the very same building every day, barely noticing it or his sacrifice, even with a memorial erected in his honor.

After he found out that I was a senior at Ole Miss, Meredith suggested I read his pamphlet on white supremacy. How could I find the words to respond? How could I thank him for even giving me the time to speak with him?

As I sat in on a presentation given to Mississippi high school students at the William Winter Summer Youth Institute at Ole Miss, I was amazed to learn more about myself as a black man from a white woman. Bender's position in "the movement" was just as pivotal as the black leaders I love to read about, like Stokely Carmichael, Amiri Baraka and Fannie Lou Hamer. Even after losing her first husband, Michael Schwerner, on the first night of Freedom Summer, Bender continued her dedication to ensuring the rights of oppressed people by organizing with COFO and practicing law to this day. I could never express enough gratitude to her.

These moments, and the instance Bob Moses and I shook hands, symbolize a similar exchange. All around this community, the older generation is inspiring the younger generation to continue.

The entire Jackson Free Press intern team curated content collaboratively and individually for this issue. We wrote each article to replicate that feeling of the passing of the guard. In case no one has held out his or her hands to you, here is your handshake.