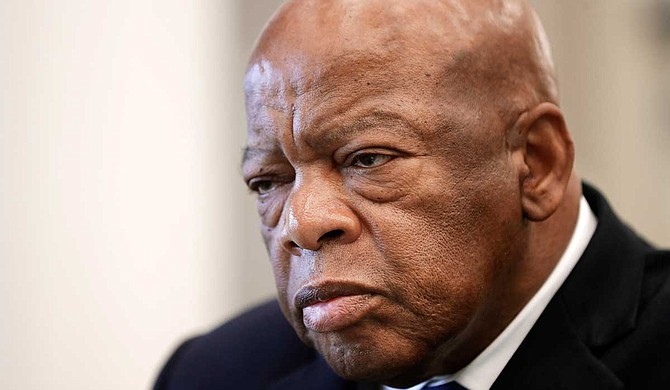 JACKSON, Miss. (AP) — The first time John Lewis traveled to Mississippi in 1961, he was arrested and jailed with other Freedom Riders, black and white, who challenged segregation in a bus station.

Lewis, who is African-American, remembers going into a restroom labeled for white men only. A Jackson police officer told him and other young people in the group to leave. They refused.

"The next words he said: 'You're under arrest.' And that was my introduction to the state of Mississippi and the city of Jackson," Lewis told The Associated Press on Thursday in a phone interview from Atlanta.

After 37 days of being locked up in sweltering local jails and a notorious state prison on the disorderly conduct charge, Lewis was released. He continued working for racial equality in Mississippi and across the South in the 1960s, and as chairman of the Student Nonviolent Coordinating Committee, he helped organize the 1963 March on Washington. Georgia voters elected him as a Democrat to the U.S. House in 1986, and he remains in office.

Lewis, 78, returns to Mississippi on Friday, one of five people being honored for advancing civil rights.

Lewis' jail mug shot hangs in a gallery at the museum with those of other Freedom Riders. He was scheduled to speak at the museum's state-sponsored opening in December but canceled his appearance because Republican Gov. Phil Bryant invited President Donald Trump.

Lewis said Thursday that he has never met Trump but, "I felt that I couldn't be there with him after he said some unbelievable things about individuals and about groups — whether it's members of the African-American community or the Latino community or the Dreamers," younger immigrants who arrived in the country illegally as children and have been protected under President Barack Obama's Deferred Action for Childhood Arrivals program, or DACA. "I just couldn't be there with him."

The opening of the Mississippi Civil Rights Museum and the adjoining Museum of Mississippi History capped the state's bicentennial observation.

The two museums are in downtown Jackson and are separate entities under a single roof. They are a short distance from the bus station where Lewis and the other Freedom Riders were arrested. The general museum skims 15,000 years of history, from the Stone Age to modern times. The civil rights museum concentrates on the intense period of social change from 1945 to 1976.

Lewis grew up south of Montgomery, Alabama, and was 15 years old when a black 14-year-old from Chicago, Emmett Till, was lynched while visiting relatives near the small town of Money, Mississippi. A cousin who was with Till said he had whistled at a white woman in a country store.

One of the other people being honored Friday for civil rights work is Rita Schwerner Bender, who demanded answers from Mississippi officials after her first husband, Michael Schwerner, and two other activists, James Chaney and Andrew Goodman, were killed outside Philadelphia, Mississippi, in 1964 — a case that became known by its FBI name, "Mississippi Burning."

Bender, now an attorney in Seattle, said Wednesday that in accepting the award in Mississippi, she intends to urge people to stand up for justice.

"Most social change doesn't happen without a demand side," she said.

Bender said she also would emphasize the importance of public education: "How can we be a thriving democracy which provides for the intellectual development of all our people, for the health of our people, for our place as contributors on the world stage, without high quality education?"

The other honorees are Ruby Bridges, a Tylertown, Mississippi, native who faced threats and ostracism when she became the first black child to integrate a public school in New Orleans in 1960; former state Rep. Robert Clark, who in 1967 became the first African-American of the 20th Century to win a seat in the Mississippi Legislature; and Democratic U.S. Rep. Bennie Thompson of Mississippi.