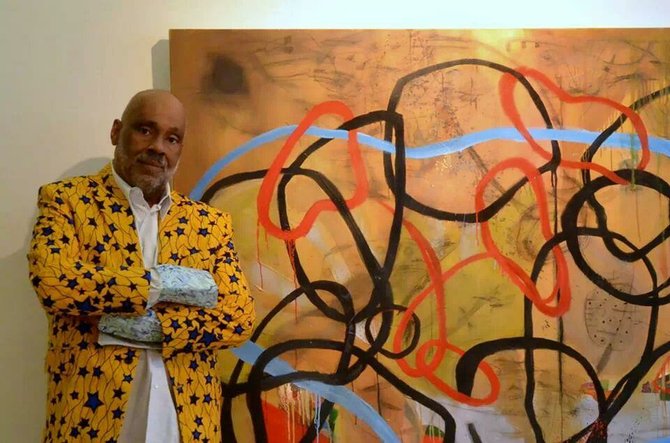 In an effort to bring more awareness to art, Jackson State University and Gallery 1 are hosting Danny Simmons the month of February.

Simmons, a neo-African abstract expressionist painter, poet, art collector and philanthropist, founded Rush Arts Gallery and Corridor Gallery in New York in the '90s. With his brother, Russell Simmons, he also established Def Poetry Jam, an HBO TV series that highlights both established and up-and-coming spoken word poets. Simmons is the author of a novel, "Three Days As The Crow Flies," and a follow-up graphic novel, "'85," as well as a book of his original poetry called "I Dreamed My People Were Calling, But I Couldn't Find My Way Home" in 2007.

After meeting Simmons almost two years ago, Gallery 1 director Kimberly Jacobs learned that he has a relative in Jackson, and she started trying to make arrangements for him to visit the gallery. While Jacobs agrees that Simmons is a great artist, she says the reason for bringing him to Jackson is deeper.

"I really think the subject matter that he deals with in his art—especially in regards to ancestral connection and the spirituality aspect of it—I think that's something very present in Mississippi as a state," Jacobs says.

"It resonates in a lot of unseen ways. I think that showing his work and bringing his perspective of viewing the ancestral connection that exists around us in many ways will evoke a new perspective on the way we see African American art and African art."

The exhibit at JSU will combine Simmons' original work with pieces from his personal African art collection. Because his work is deeply informed by such African art, Jacobs thought it important to show both groups of work.

"I think it will broaden the perspective of what African American art represents as well as the spiritual importance that exists in African art," Jacobs says. "His African art collection is very personal. ... He selects work that you would not typically see in a museum."