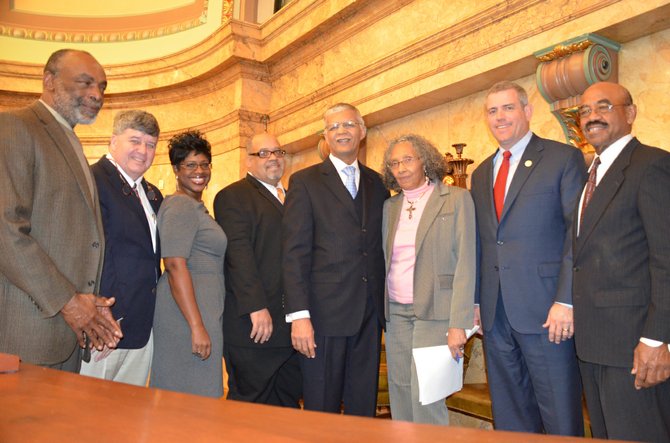 They say the key to a man's heart is through his stomach.

Maybe that's what Mayor Jackson Chokwe Lumumba was thinking when he addressed the state House of Representatives and invited legislators to try two of his favorite local restaurants—Chitoes African Deli in west Jackson and Pearl's Southern Kitchen in South Jackson—for the three months they're in town.

Lumumba's address to legislators to kick off the 2014 legislative session was not unprecedented. But even though his predecessors, Frank Melton and Harvey Johnson Jr., had each addressed the state House and Senate, Lumumba's visit carried special significance.

To say that tension has long existed between City Hall and the Capitol (to say nothing of the governor's mansion) would be an understatement. The election of Lumumba, given his roots in the militant black-liberation movement, had the potential to grow the rift.

So he's going on a charm initiative. Calling it a "new era of cooperation" between the capital city and the state, the mayor told members to enjoy Jackson's restaurants and pitched the city's car dealerships.

The capital city wants legislative funding to pay for emergency services the city provides to state buildings and agencies, to move to elected school-board members and the ability to appoint more municipal judges.

"We're always looking for creative ways to pursue funding," Gray told the Jackson Free Press. The first week of session often comes with the unveiling of legislative reports, which define the scope of many problems legislators face. A report from the Center for Education Innovation, authored by former Clarion-Ledger editor David Hampton, shows the real-life effects of state budget shortfalls by examining five low-income school districts, including JPS.

Overall, the survey found in order to cope with losses of state funding through the Mississippi Adequate Education Program along with federal funds, the districts had to fire teachers and support staff and eliminate student support services.

The Mississippi Adequate Education Program, the roadmap for the minimum funding schools need from the state, has only been funded twice since 1997 and is currently about $1.2 billion in the red.

The report states that JPS is expected to experience MAEP underfunding of $17.2 million during the 2013-2014 school year, which follows underfunding of around $15 million each of the previous three years. In that time period, JPS was forced to eliminate 90 positions, 50 of which were teachers.

"Funding reductions are not just ledger entries. They have real impact on local school districts. Parents and community and educational leaders know those impacts are real. As the state moves to greater accountability and higher standards, adequate funding becomes even more critical. It is hoped that future surveys and discussions will revolve around the impact of increased education funding, not further reductions," Hampton wrote.

MAEP funding will be a large part of the conversation during the session, though it remains unclear whether there will be any movement on the issue. Neither the budget recommendation of Gov. Phil Bryant or the Joint Legislative Committee contains money to fully fund MAEP.

For the 2015 fiscal-year budget, the formula calls for $2.35 billion. The legislative budget office recommends spending the same amount on MAEP this year as last year, $2.13 billion, creating a $215 million shortfall.

Legislators have dropped more than 300 bills in the House and more than 275 in the Senate. Here are a few noteworthy ones:

House Bill 1 makes giving sexually oriented materials to minors a felony; HB 21 and HB 23 makes killing public utility and emergency responders a capital murder offense; HB 30 prohibits legislators from becoming lobbyists for four years; HB 85 would hold back state education funding from districts that refuse to display the American flag or recite the Pledge of Allegiance; HB 86 is one of several drug-testing for recipients of Temporary Assistance for Needy Families and Medicaid.

Senate Bill 2043 would reduce the 174-member Mississippi Legislature to 70. SB2044 prevents students with 21 or more school absences from graduating, and SB 2044 would compel people suspected of raping someone under age 16 to a lie-detector test.