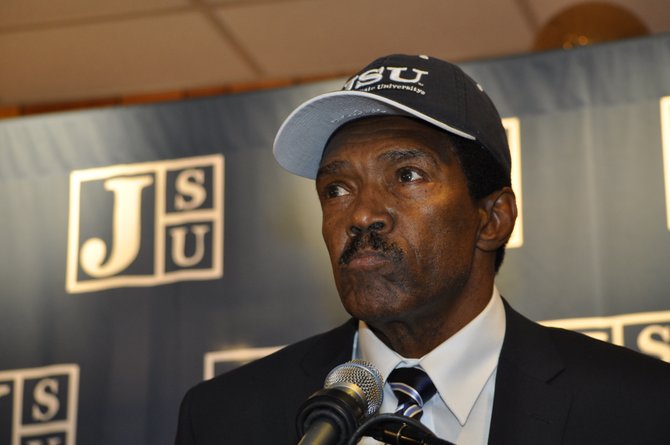 Harold Jackson was selected as the new head football coach of the Jackson State Tigers. Photo by Trip Burns.

During a press conference, Jackson said he had not met with his assistant coaches and was not sure whether he would make staff changes but did discuss his vision for the team.

As of yesterday, Jackson State University has a new head football coach.

The school announced Dec. 18 that it would replace Rick Comegy and, less than one month later, unveiled Harold Jackson—who played college ball for the Tigers before going on to play and coach in the NFL—as head coach.

During a press conference, Jackson said he had not met with his assistant coaches and was not sure whether he would make staff changes but did discuss his vision for the team.

Still, several large questions loom over Jackson and the school's storied football program. Among the biggest challenges will be figuring out how to reverse years of declining attendance numbers and reconnect with fans in Jackson.

When JSU released Comegy last month, JSU Communications Director Eric Stringfellow told reporters that the university would look for its next coach to recruit locally and instill discipline in the players.

A look at the current roster shows eight players from Jackson Public Schools and five more from the greater Jackson area. The capital city area traditionally sends its best players to other in-state schools such as Mississippi State, Ole Miss and Southern Miss, all of which compete in the highest division of college football, the Football Bowl Subdivision.

Jackson addressed some of those concerns, saying: "Our players will have discipline in the classroom and on the competition level. Our football players will be developed as good citizens."

The new coach also commended Comegy, whose contract was not renewed in December and is rumored to be the frontrunner for Mississippi Valley State University's head coaching job, but promised to take JSU's program to the next level.

Jackson was also an assistant coach for the Patriots as well as for the Tampa Bay Buccaneers and New Orleans Saints. He has also held several college coaching appointments, mostly recently at Baylor University.

JSU President Carolyn W. Meyers pointed to Coach Jackson's experience and commitment to player development as the top reasons for his hiring.

"Indeed, this is going to be a wonderful season for Jackson State University," Meyers said.

The other big question mark is what will come of with JSU's pursuit of a domed venue for football and other events. Legislation to help the school pay for a stadium was proposed during the 2013 legislative session, but it was unsuccessful.

No legislation pertaining to Jackson State's proposed stadium has been filed so far during the 2014 session.

Great Choice! Great Person and I'm sure that this coach will accept the torch and carry this team to VICTORY!