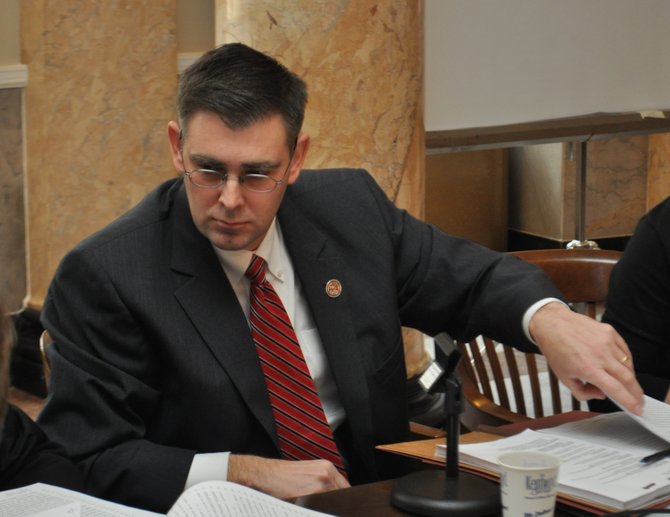 Rep. Andy Gipson, a Braxton Republican who chairs the Judiciary B Committee, said judges have complained about a mismatch of sentencing guidelines and policies from the Mississippi Department of Corrections, tying the judges' hands to hand out the sentences they want to give. Photo by Trip Burns.

Mississippi has the second highest incarceration rate in the nation, and the length of sentences that judges hand out has grown 28 percent in the past decade.

That is the problem facing legislators who will craft legislation to reform the state's prison system.

A joint meeting of the Mississippi House Corrections and Judiciary B committees took the first step towards grappling with the growing prison population that policymakers believe is needlessly costing state taxpayers hundreds of millions of dollars.

Rep. Andy Gipson, a Braxton Republican who chairs the Judiciary B Committee, said judges have complained about a mismatch of sentencing guidelines and policies from the Mississippi Department of Corrections, tying the judges' hands to hand out the sentences they want to give.

This climate of uncertainty, which includes a lack of clarity about the definitions of "violent" and "nonviolent" crimes, confuses defendants and defense attorneys, prosecutors, prison officials and judges, the report states.

Giving judges more sentencing flexibility is a common thread in many of the recommendations offered in a 24-page task force report from the Mississippi Corrections and Criminal Justice Task Force, published in December.

"We want to (give) judges more flexibility in that regard, leave it in their hands," Gipson told committee members at the Capitol Wednesday morning.

Even though the task force recommends wider use of drug courts and other alternatives to incarceration, some members were concerned about other structural problems in the criminal justice system, which disproportionately affect minorities and the poor.

Rep. Sherra Lane, D-Waynesboro, noted that some alternative sentencing programs require monthly fees. When people do not pay those fees, they can be sent to prison. The task force proposes that such "technical offenders" be housed in a separate part of prisons, away from the general prison population.

Racial and economic disparities that persist in the criminal justice system concerned other lawmakers, such as Rep. Charles Young Jr., D-Meridian. Of the approximately 25,980 men and women in MDOC's custody, 65 percent are African American, MDOC information shows. Mississippi has a black population of 37.4 percent.

"Skin color and your pocketbook (affects) the outcome of your case—and it has nothing to justice," Young told the Jackson Free Press after the hearing.

We need to reduce the state's prison population by half. And if you add in all the prisoners who are black in our town, city, county, and regional jails, the figure of 65% of our total population of inmates would probably increase. We need drug courts, we need diversion paths, we need youth programs, we need study, learn, and work programs for the chronically un- and under- employed, re-entry programs for those who have done their time, and community, substance abuse, and mental health services available and actively outreaching to these individuals.