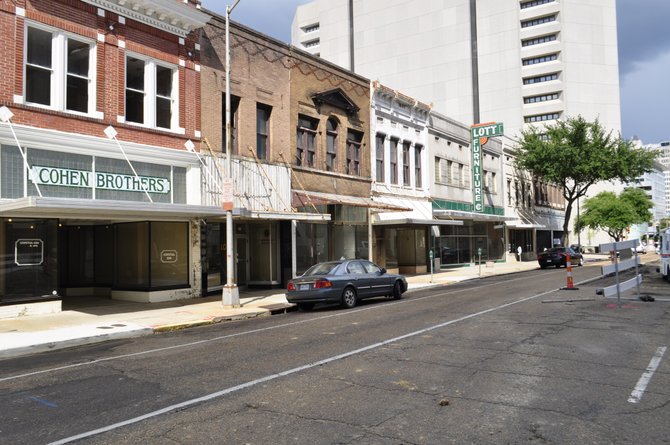 Plans for the Capitol Art Lofts, on West Capitol, are on hold, but developers hope it’s not for long. Photo by Trip Burns.

Plans for a residential development in "ruins" across from the King Edward Hotel are going back to the drawing board as backers search for new methods of financing.

The Capitol Art Lofts were announced last spring and called for 31 moderately priced loft apartments that would include fitness and business centers as well as space for art galleries and studios.

BlackWhite Development, a Jackson firm, designed the concept along with New Orleans-based HRI Properties Inc., which helped renovate the nearby King Edward and Standard Life buildings.

Conceived with the starving artist in mind, the $20 million project was to be funded with low-income housing credits from the Mississippi Home Corporation, or MHC, a quasi-state agency with legislative oversight that helps finance affordable-housing projects. The project could bring needed affordable housing to downtown Jackson, where many young creatives and professionals cannot afford the many of the new upscale residential housing units built there in recent years.

But MHC rejected applications from HRI and more than two dozen other developers from around the state in late 2013, citing too few credits to hand out.

"That was a very big blow," said Josh Collen, vice-president for development for HRI Properties Inc., who said the company would also reshape the size and scope of the project, which could mean building something smaller—or larger—than envisioned.

The Internal Revenue Service allows state housing agencies such as MHC to award developers up to $750,000 in tax credits per project based on a scoring system. Investors then purchase the credits to use toward their federal tax bill each year for a decade.

In April 2013, MHC allocated two years worth of tax credits all at once to pump cash into developments planned for around the state. At the time, critics complained that the move represented a favor for political pals of Gov. Phil Bryant, who does not oversee MHC but does appoint six of members of the agency's nine-member board of directors.

Bryant, a Republican, also had misgivings about having a low-income housing development just footsteps away from the Governor's Mansion and on the same street, people who have spoken with the governor told the Jackson Free Press.

Leland Speed, chairman of the board of directors for Jackson-based EastGroup Properties Inc. and former director the Mississippi Development Authority, said he talked to Bryant and believes the governor's concerns have been allayed.

Speed said the storefronts detract from their more aesthetically pleasing neighbors, the King Edward and Standard Life buildings. Moreover, Speed says cleaning up the eyesore might also breathe life into other stalled projects such as the Farish Street Entertainment District.

"That is the most important project we've got going on in downtown," Speed said of the lofts.

BlackWhite is no longer involved with the development. Collen, of HRI, said the company is still committed to the neighborhood; it just needs to find the "right recipe" to making the financing work.

Speed points out that other program such as federal new-market tax credits, historic tax credits and MDA state grants might also be available. Speed and Colleen each say it's unlikely that waiting another two years to apply for low income tax credits is an option.

Maybe renovation plans should scale back to restoring the buildings structurally with minimal but basic improvements for a living loft. One or more of those buildings is unsalvagable and only the front is standing. Also, break it up into individual building units for financing and development purposes. A cafe down there on the corner near the train station wouldn't hurt one bit either.