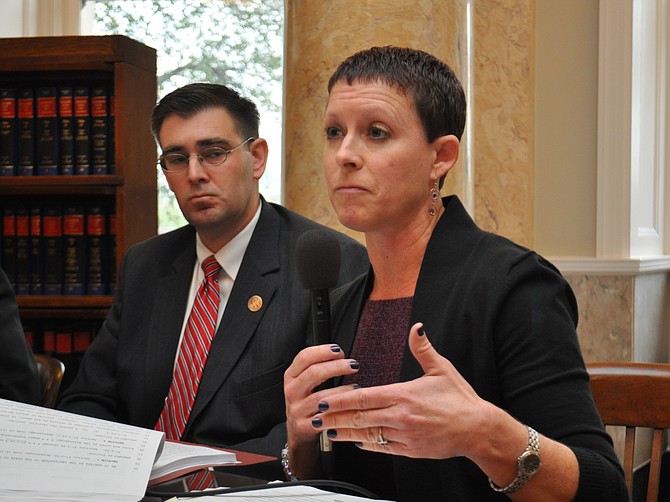 With help from a grant, some Mississippi teenagers will be educated on rape-prevention strategies, said Heather Wagner (right) of the state’s Office Against Interpersonal Violence. Rep. Andy Gipson, R-Braxton, listens. Photo by Trip Burns.

"Jason" and his girlfriend, "Megan," invite some friends over for movie night and snacks. Jason asks Megan to set out some chips and drinks for everyone; she is happy to do so. When the refreshments are depleted, Megan refuses, saying she's not their waitress. Jason gets angry and hits her in the face and drags her into the kitchen. The friends shrug off the behavior because they had seen the couple fight in the same manner many times before.

This is one of the scenarios and some sample questions from a curriculum developed by the Center City, Minn.-based Hazelden Betty Ford Foundation to teach middle- and high-school-aged students about intimate-partner abuse.

This program, called "Safe Dates," will soon launch in 10 rape-crisis centers in Mississippi thanks to a of $15,750 grant to the Mississippi State Department of Health from the U.S. Centers for Disease Control and Prevention for rape prevention education. It aims to help teens differentiate between relationships that are caring and supportive and those that are controlling, manipulative and abusive.

"Teaching kids, a vulnerable population, about healthy relationships and risk factors is a valuable prevention tool to stop the occurrence of rape," said Heather Wagner, director of the state health department's Office Against Interpersonal Violence, in a news release announcing the grant award.

The thinking behind Safe Dates is that abusive behavior usually starts during adolescence, not in adulthood.

CDC information shows that young women between the ages of 14 and 17 make up 38 percent of date-rape victims. Also, among the teen dating populations, 59 percent have suffered physical violence, and 96 percent have experienced psychological or emotional abuse, the CDC reports.

The state health department will go to rape-crisis centers around the state, including Catholic Charities in Jackson.

"Prevention is more than teaching a female safety tips, it's about changing attitudes and social norms that support sexual violence and sexist attitudes, and recognizing myths and victim blaming."