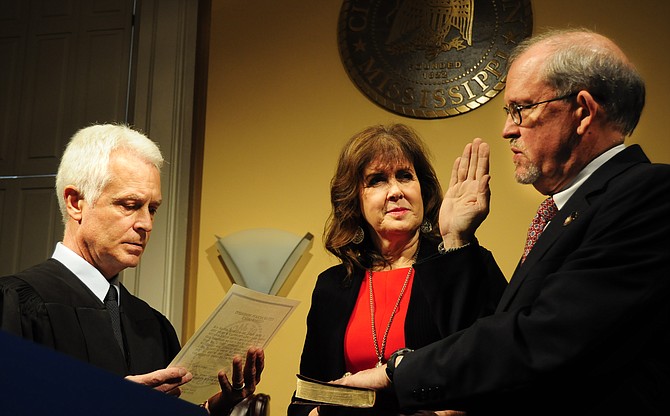 The founder of a financial services company, Ashby Foote recently won a special election over attorney Dorsey Carson to take over for Quentin Whitwell, who left the board in August.

The Jackson City Council has moved closer to returning to full strength with Ashby Foote officially joining the body as Ward 1 Councilman.

The founder of a financial services company, Foote recently won a special election over attorney Dorsey Carson to take over for Quentin Whitwell, who left the council in August.

Foote kept his remarks brief, saying that he is happy to join the city council and looks forward to getting to know his fellow council members, all of whom are Democrats. Foote is a Republican.

Council President De'Keither Stamps said Foote's addition would help restore a sense of oneness on the council, which, until Foote took the oath from Hinds County Chancery Judge Bill Singletary, had two vacancies.

"It's a thankless job at times and a rewarding job at other times," Stamps said of the city council.

Stamps added that Foote's coming aboard caps off a year of highs and lows in Jackson, including the passage of a 1-percent sales tax for infrastructure work, the death of Mayor Chokwe Lumumba, a special mayoral election, daunting budget challenges and, at times, tough disagreements between city officials.

Foote joins the city council as Jackson begins what will eventually be $1 billion in infrastructure developments related to a consent decree from the U.S. Environmental Protection Agency, and the 1-percent sales tax.