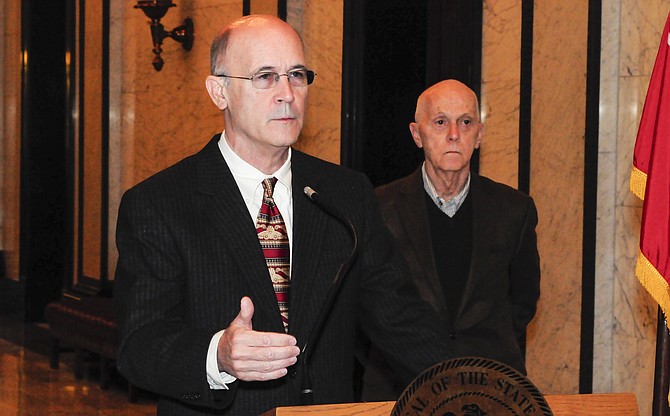 Sen. Hob Bryan, D-Amory, announced the Democratic budget proposal for the 2015 session, which addresses a lack of funding in education and for teacher pay raises, state employee pay and state highways. Photo by Trip Burns.

The Mississippi Legislature does not officially convene until January, but the two parties are already wrangling over how to spend the state's money. With Republicans controlling both houses and the Governor's Mansion, not a lot of compromise is necessary for the GOP to get its way in the new session.

But Democrats are fighting back, especially on public-education funding.

Democratic lawmakers last week called on the state to use the money not yet allocated in the Legislative Budget Office's state budget recommendation toward education, state employee pay and state highways. Sen. Hob Bryan, D-Amory, told media at the Capitol Thursday morning that making these budget priorities must be a bipartisan effort.

Rep. Cecil Brown, D-Jackson, expressed surprise that, while leaders from the Joint Legislative Budget Committee have said they recognize education as a priority, the budget proposal for 2015 includes cuts to all levels of education funding.

Though Lt. Gov. Tate Reeves bragged that the Legislature would fund education greater than ever before this year, Brown said the budget proposal still shortchanges public education by hundreds of millions of dollars.

Bryan said that Republican leaders claim the state has enjoyed a 3 percent revenue growth, which is why he is curious why the budget cuts funding for public K-12 schools, community colleges and universities. "We were just plain shocked to see that," Bryan said.

The first order of the Democratic budget proposal is paying for the teacher pay raise—which will cost $40 million—that garnered support from both parties and passed last year. The proposed budget only provides $32 million to pay for the teacher pay raise, so the Democratic proposal requests an additional $8 million to fund the entire raise, which will cost $40 million.

Bryan said he plans to find methods to return to full funding of the Mississippi Adequate Education Program, which has only happened two out of the 17 years it has existed as part of Mississippi law.

"It is the basis for their budgets. And this is the same way the adequate education program works."

The MAEP request for 2015 was $2.426 billion, which is an increase of $291 million over what public schools received last year; the Legislature underfunded MAEP last year by allocating about $250 million less than the 2014 request for $2.347 billion.

The Democratic budget proposal funds one-third of the $291 million difference between the 2014 actual number and the 2015 MAEP request, $97 million, and plans to increase by that amount for the following two years.

Brown and Bryan also spoke to the need for funding for state employees and state highways. They propose a $1,000 increase for each employee position that did not receive a pay raise, totaling $17 million.

The Democrats also propose returning $30 million to the highway department for new construction. They identified $188 million available in the state budget, and their proposals total $185 million. Brown and Bryan say this proposal can garner support across party lines, and it leaves $393 million in the rainy-day fund.