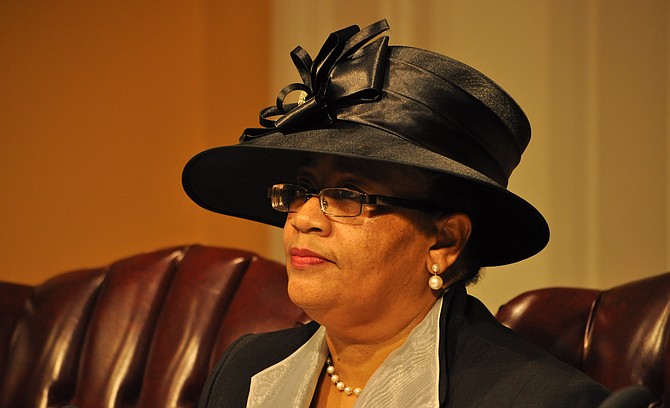 LaRita Cooper-Stokes tendered her resignation from the Jackson City Council last night to take a seat on the bench as a county judge. Photo by Trip Burns.

As expected, Ward 3 Councilwoman LaRita Cooper-Stokes tendered her resignation from the Jackson City Council last night to take a seat on the bench as a county judge.

Cooper-Stokes' departure makes the second mid-term resignation of a sitting council member in less than four months. In August, Ward 1 Councilman Quentin Whitwell left unexpectedly to move his family to Oxford. Whitwell's replacement will be determined by a runoff on Dec.16 between attorney Dorsey Carson and investment advisor Ashby Foote.

Now that Cooper-Stokes has officially vacated the seat, the current five-member council will have to set a special election for Ward 3, which could happen as early as the next regular meeting on Tuesday, Dec. 16, the day of the Ward 1 runoff.

Ward 3's special election could prove very entertaining. Albert Wilson, who ran for the seat in 2013 and competed in the special election for mayor this year reportedly already has campaign signs up.

Another question mark is Pam Greer, the founder of a nonprofit that promotes violence prevention and supports families of violent-crime victims. Greer also ran for the Ward 3 post in 2013 and has remained a vocal critic of city government on social media. Greer told the Jackson Free Press she has not made a decision about running again for the seat.

The most interesting possibility is that Cooper-Stokes' husband, Hinds County District 5 Supervisor Kenneth Stokes, could seek his old seat. Stokes held the seat until he joined the county board in 2011; Cooper-Stokes replaced him in 2012 after a contentious special election that wound up in court. Stokes hasn't been very happy on the relatively quiet county board lately and could want to go back the higher profile city council.

Going back to the referendum on the 1-percent sales tax, 11 elections have taken place somewhere in the city of Jackson, since January 2013.