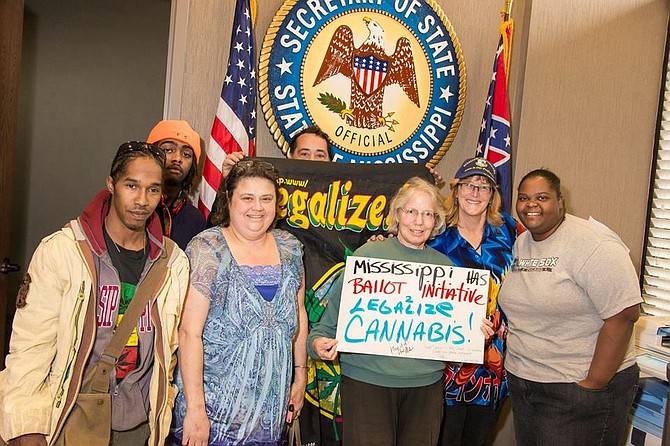 Shannon Smothers-Wansley joined Mississippi's latest marijuana legalization push for her grandmother, who passed away in September 2011 after battling dementia, which took away her appetite.

"If she had access to something with cannabis in it, she would not have died of starvation," Smothers-Wansley told the Jackson Free Press.

The potential of cannabis as an appetite stimulant is among the key arguments from proponents of rolling back legal restrictions for marijuana for its medicinal purposes.

However, opponents of legalizing, or decriminalizing, weed point to the fact that the U.S. Food and Drug Administration does not recognize cannabis or its extracts as a medicine. And despite the growing number of states and cities that have decided to start looking the other way when it comes to small amounts of recreational marijuana, the federal government continues to define marijuana as a Schedule I drug on the same level as heroin and cocaine.

But advocates in the Magnolia State hope that the momentum toward legalization, which is bolstered by the presence of the nation's medical marijuana farm at Ole Miss, has made Mississippi more 420 friendly.

Last week, organizers of a statewide ballot initiative to legal and decriminalize, submitted language for the measure with the Mississippi secretary of state.

The proposal would end the prohibition on cannabis and fully legalize the use and taxation of marijuana for adults over age 21. Recreational users could have nine or fewer marijuana plants for their personal use. The state would classify anyone with more than nine plants as a cannabis farmer, required to pay an annual $25 fee to the local municipal or county. Prospective dispensers would have to pay $1,000 for a special license. Additionally, a state sales tax of 7 percent would be charged on all sales with the exception of medical marijuana and industrial hemp.

Kelly Jacobs, a Hernando resident and one of the organizers of the ballot initiative, wants state law to treat marijuana the same way it does alcohol.

Twenty-three states plus Washington, D.C., have either legalized recreational use of marijuana or removed penalties for using cannabis for medical or small amounts of recreational uses. In Washington state and Colorado, the first two states to legalize marijuana, the industry is booming and resulting in millions of dollars in tax revenue to those states. Jacobs sees the same potential for Mississippi, the nation's poorest state and the state with the second highest incarceration rate.

She estimates that legalizing marijuana would add $17 million to the state's coffers in tax revenue and the savings from not incarcerating people for nonviolent marijuana-related crimes. The second part of the ballot initiative would grant pardons to everyone in the state formerly or currently convicted of marijuana possession or distribution.

Supporters understand that conservative Mississippi might be frosty to full legalization or pardoning marijuana crimes. Gov. Phil Bryant has vowed not to grant any pardons in the wake of the 2012 controversy over hundreds of pardons fellow Republican Gov. Haley Barbour issued before he left office. During the last legislative session, Bryant signed legislation allowing the sale of cannabidiol, a marijuana extract that does not contain THC, only after receiving assurances that the substance is not addictive.

Jacobs argues that marijuana is no more addictive than cigarettes or alcohol, both of which are legal. "Why aren't you limiting tobacco which is the real gateway to cancer? Or alcohol, the gateway to drunk driving?" she asked.

To put the initiative before voters in 2016, organizers must collect 107,000 signatures from across the state by October 2015.

David Lions, founder for Mississippi for Medical Marijuana, acknowledges that the 2016 ballot measure goes a step farther than he was calling for. But looking at actions in other states, Lions believes most states might be headed toward full legalization anyway.

"It goes a step beyond where I wanted to go—but, hey, ride the wave," Lions said.

I have been smoking since my diagnosis of stage 4 head and neck cancer. Although i am happily to say that i am in remission, i now have no desire to eat. I was so sick during chemo and radiation. I couldn't even keep water down. Once i started smoking, nausea pain turned into hunger pain. I was able to eat and take my meds after smoking marijuana. I now have no taste or smell like i once had. It now comes and goes. Right now, i go by texture of food. If i eat before i smoke, i push the food away in disgust. If i smoke before i eat, I'll eat good. I lost over 50 pounds when i was sick. I have gained 15 of that back, thanks tho marijuana. Mississippi NEEDS to legalize this wonderful medicine. Stop hurting us. And start helping us!

Legalize it! Tax it! HELP OUR STATE!

Opponents might try to point out that if cannabis was legal, it would result in increased use by minors. This could not be further from the truth. Legalization and taxation means CONTROL. In Colorado, marijuana use among teens was declining prior to legalization, and that trend continues. Legalization would severely limit the ability of under age persons to obtain it. Just as alcohol and tobacco vendors can be fined or have their licenses suspended for selling to minors, cannabis vendors will not want to jeopardize their businesses. Will sale to a minor happen? It probably will, but in much less numbers than what is occurring today when teens venture into very dangerous situations to obtain it.

All self proclaimed Christians should show compassion to folks like cperry1979. This would be the right thing to do. Not throw them in a jail cell for using medicine that helps keep them alive. We can hope, pray, sign the petition and vote for compassion. Mississippi should be the first state in the south to legalize, not the last.

LEGALIZATION + TAXATION. Has been good for Colorado. We need all the help we can muster. Our kids deserve better.