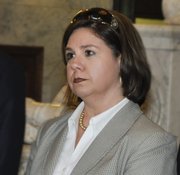 I sat in the chair with the pen in my hand trembling. "If I focus on the pen," I thought, "I won't break down sobbing." Carla and I, after the birth of two children and 10 years of partnership, were sitting in a clerk's office in downtown Portland, Maine, applying for our marriage license.

The Defense of Marriage Act had fallen, states were one-by-one allowing us to marry, and it was time. We knew our union would still not be legal in Mississippi, but we could at least finally receive the federal tax benefits of other married couples. We two Mississippians chose the incredible state of Maine to call our second home—the place that welcomed us with open arms and granted us what we'd longed for since the day we first met: a legal marriage.

"What's it like as an LGBT family in the state of Mississippi?" The Human Rights Campaign posed this question to us at a recent board meeting in Washington, D.C. They were planning for Project One America—their entry into Mississippi, Alabama and Arkansas. We are the "finish line" for LGBT equal rights.

I'd thought about the question for a long time. I'd asked friends what their experiences were, and I'd posed the question on social media. "What's it like?"

For the most part, Carla and I have a pretty idyllic life. We have healthy children in a school that doesn't just tolerate our family, they celebrate it. We run two successful businesses, have plenty to eat, and a local airport to take us anywhere else when we just have to get away and remind ourselves it's not like this everywhere.

We've purchased every legal protection money can buy: wills, trusts, executors, contracts, joint mortgages, but at the end of the day, as our attorney told us, "you can't will children to someone." Carla has no legal rights to our children. When we went to the OB/GYN to talk about having children, there was no fertility specialist in the state who would treat us. So we went out of state.

One couple we knew had driven to Atlanta every month to have treatment. Another set of friends went to New Orleans, so we chose the closer of the two. I wanted to carry them—it was a dream of mine, and Carla obliged me that privilege. But because she was so much younger, our doctor recommended that she be the egg donor for our in vitro fertilization procedure, so that's what we did.

Mississippi law says the birth mother is the only legal mother, and Carla has no legal rights to her biological children. Same-sex, second-parent adoption is also prohibited in Mississippi so if something happens to me, my family could take them away from her. We've spelled out our wishes in legal documents, and I've written letters to supportive family members pleading for their assistance in my absence if it's needed, but the fear that my family could be torn apart like that haunts me every day.

In Mississippi, I told the attentive HRC board members that we live under the dark cloud of our past. Many of us were alive when the schools were desegregated. Our parents went through the violence of the riots and burning crosses and KKK marches. It's not just history for us; it's memory. When I say that some LGBT Mississippians are afraid to come out of the closet and live authentic lives, it's not theoretical or an intellectual decision—they are genuinely afraid for their lives and livelihoods.

We can be fired from our jobs, thrown out of our families and churches, and beaten or publicly ridiculed for nothing more than saying who we are. And many of us have been.

What's it like? We find safe places and like-minded people. We create bubbles of safety to live in, and we smile and try to fit in. We don't talk about it just like we don't talk about the horrid race relations that still exist in Mississippi or the extreme measures that had to be taken just to get to where we are today. We get up every morning and go to work, visit with friends, pay our taxes and tell ourselves, "That's just the way it is in Mississippi."

Carla and I are asked quite often why we don't just leave. The truth is, it's hard to pack up your children and move away from their grandparents and support network to move to another state. It's hard to sell a home, much less a business right now in Mississippi. And at the end of the day, should anyone be forced away to leave their home in America in 2014 because someone else doesn't like them or they're afraid of persecution?

What's it like living in Mississippi? It's home. We simultaneously love it and stay irritated with it. And we vacation in Maine as often as we can.