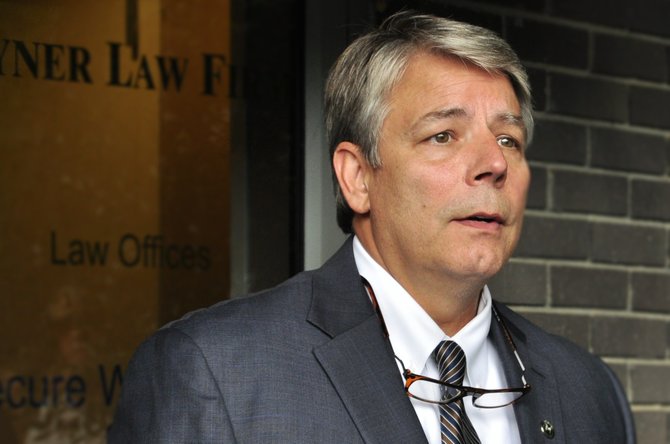 Mitch Tyner was listed as an irregular voter in his own election challenge filed on behalf of Sen. Chris McDaniel. He said this was because field workers determined the entire precinct in which he voted was problematic. Photo by Trip Burns.

Last week the Internet poked fun at state Sen. Chris McDaniel's challenge to the election results of the U.S. Senate race due to one piece of evidence included in the amended filings: His campaign lawyer's name was listed as an irregular vote.

Political enthusiasts on both sides speculated about why his name was listed, but McDaniel lawyer Mitch Tyner has confirmed that he voted, or at least tried to vote, for the Tea Party candidate. "His banner's on my building; of course, I voted for Chris McDaniel," Tyner said.

Comedic blogs used the seemingly hypocritical element of the challenge to mock the McDaniel campaign, but right-wing blogger Charles C. Johnson claims the addition was unfiltered data. On Wednesday he tweeted: "The entire Madison precinct is in question, and McDaniel volunteers reported the data without filtering it so it can be properly examined in the appropriate venue."

"It would be dishonest of me to remove something that the field folks found as an irregularity," Tyner said.

Tyner acknowledges that many people have been confused about how the numbers of irregular votes—for both McDaniel and his opponent Thad Cochran—factor into McDaniel's challenge. He said the law does not require all the irregular votes that are counted to be for Cochran.

"That's not what the law is geared to determine," Tyner said. That he is listed as an irregular vote does not discredit his claims of a compromised election, he says, but is actually "just another example of no uniformity starting from the top down on trying to have an election with integrity."

The challenge only must prove that the number of problematic votes, no matter for which candidate, exceed the margin of victory. When this happens, Tyner said, "the will of the people cannot be discerned from the vote."

Field workers who examined the poll books in Ridgeland, where Tyner voted, determined that his vote was irregular because he was marked as voting twice. There were also problems with how the party's poll books, which the parties are supposed to swap to determine who voted in the Democratic primary, were used, he said.

"In that Democrat poll book it shows me and my wife as voting on the runoff on the 24th," Tyner said. "Now, obviously that would be for the Republican runoff although it's noted in the Democrat poll book because of the poll-book swap. It addition to being marked as voted on the 24th; out in the margin there is another notation of 'voted' both by my name and by my wife's name," Tyner said.

In fact, Tyner said nearly every voter in the Ridgeland precinct where he voted was marked twice as voting. This potentially tainted the entire election results of that area.

"You look at that poll book, you cannot discern what occurred on the 24th," Tyner said.

The solution to the problem of a large number of irregular votes is not simply to "ask every single person how they voted," Tyner said, but to hold a new election. But that's not what the McDaniel camp wants. Instead, Tyner believes McDaniel should be named victor.

Tyner said he bases his claim that McDaniel won the election by 25,000 votes off the regression analysis and Chism poll results cited in the challenge, not by the number of irregular votes found by poll inspections. In other words, the campaign is attempting to prove two separate things—that the whole election was compromised by irregular votes and that McDaniel would have won the nomination if Democrats had not improperly voted in the Republican runoff.

Chism Strategies, a Democratic polling firm, conducted a survey on behalf of the McDaniel campaign of "self-identified Democrats who voted in the June 24th US Senate GOP Runoff in Mississippi."

The results showed that 71 percent of those voters, of which 463 were polled, intend to vote for someone other than Cochran in November. That intent, Tyner and the McDaniel camp claim, is why their votes can be challenged.

In the 2008 election, a federal court found that a challenge could only be made, in this case, against Democratic votes cast in a Republican primary if the voter "openly declares that he or she does not intend to support the nominees of the party."

Tyner's name has come up in past years as a possible crossover candidate. He ran against Haley Barbour in the 2003 Republican gubernatorial primary—a move many believed was a political trick by the Democrats so that Tyner could wage a tougher campaign against Barbour than incumbent Democratic Gov. Ronnie Musgrove could. During the campaign, the Barbour camp sent out a missive calling his opponent the "Liberal Trial Lawyer and Democrat-Lover Mitch Tyner."

I'm willing to bet the farm that if you questioned the precinct managers they will give you a plausible explanation for why the voters are marked twice in the poll book. I'm willing to bet that they were cross-referencing whether or not that person voted in the June 3rd primary. They were not supposed to write in the poll book in that manner but I'm sure they were just trying to do the right thing. They didn't realize their actions would contribute to this controversy.

A majority of the findings in his challenge can be explained if somebody would just ask the right questions.