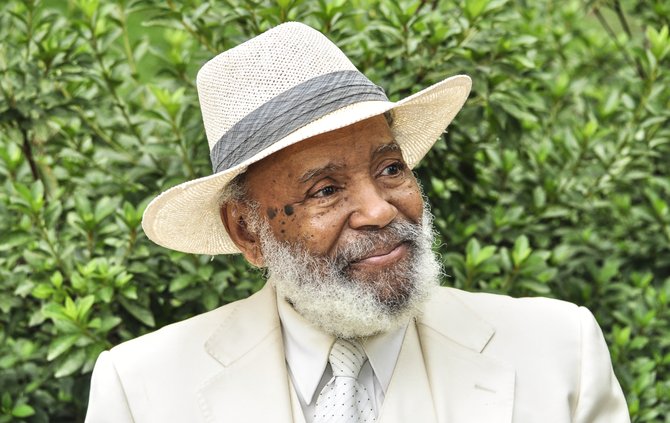 James Meredith pointed out that the debate over slavery gave way to the Missouri Compromise of 1820, which allowed slavery in the then-newly proposed state of Missouri but not in new western territories. Photo by Trip Burns. 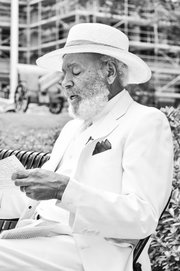 It happened 51 years ago in Oxford, when James Meredith became the first black student to enroll at the University of Mississippi. And it's happening right now 400 miles to the north of Oxford in Ferguson, Mo., in the wake of a white police officer shooting and killing 18-year-old African American Mike Brown.

Ferguson police officer Darren Wilson killed Brown, who was on his way to his grandmother's home, on Aug. 9. Since Aug. 10, not a day has gone by without demonstrators crowding onto the streets of Ferguson, some to remember Brown and some to demand that Wilson, who is white, be charged with murder. On several nights, demonstrations have involved clashes between law-enforcement agencies and protesters. Some people looted area businesses and broke the windows out of storefronts, while others tried to stop them.

Meredith, who is known for making provocative statements, said the Ferguson protests are more important historically than even the violence that erupted from his own admission to Ole Miss in 1962.

In 1931, nine young black men faced several juries in the town of Scottsboro, Ala., when two white women accused them of rape for reasons that remain largely unknown. Each of the Scottsboro Boys served prison time. Five of the boys--Olen Montgomery, Ozie Powell, Willie Roberson, Eugene Williams and Roy Wright--had their convictions overturned in 1937. The judge sentenced another, Clarence Norris, to death, but he escaped and went into hiding. Then-Gov. George Wallace pardoned Norris in 1976; he died in 1989.

Despite its location outside the Deep South, Missouri has often been in the middle of the race debate in the U.S.

Meredith pointed out that the debate over slavery gave way to the Missouri Compromise of 1820, which allowed slavery in the then-newly proposed state of Missouri but not in new western territories. Missouri resistance to ending slavery, or even allowing some states to outlaw slavery, helped start the Civil War. In the late 1850s, Missouri "Border Ruffians" even crossed over into Kansas to force slavery into that then-territory, violently attacking free-state settlements and leading to the moniker, "Bleeding Kansas."

The 1857 Supreme Court decision in the case of a slave named Dred Scott made it so that black slaves remained property even in parts of the nation that outlawed slavery.

In that sense, the Show Me State makes a natural front for today's racial conversation, Meredith said.

"The (battle) lines are drawn in Missouri," he said.

Meredith is starting an organization that encourages African American elders to read and understand the Bible and to pass its lessons to young people. He wants the group, The Bible Society, to have a presence in each Mississippi county and eventually to have charters in cities around the U.S.

"The only way to train the youth is for the elders to do their jobs," Meredith said.

Here's a question. When you stated that Mike Brown was going to his grandmother's house, could you have also stated that he was involved in an incident at a convenience store earlier in the evening and that he was caught on camera pushing and stealing? Just a question, because the way you have it makes it sound like he was a nice quiet boy scout.

Also, does Mr. Meredith REALLY think that looting, burning and attacking stores is the way to end violence against blacks? Really?? I agree that everyone has the right to protest, boycott, and demonstrate against anything they disagree with, but does looting, rioting, burning businesses and in general attacking the police really accomplish what the people of Missouri want in the end?

I just don't understand this story. It seems to be really biased against all the facts. Thanks

I am in such distress and am battling a level of frustration that i think must mimic depression. This senseless killing in Missouri of yet another young Black man/child has reached depths in my soul that I thought had been reached with Trayvon Martin. The part of your soul that screams when your vocals won't let you. That part of your spirit where there once were tears and now seems all too familiar for the tears to come. I cry dry dreams and waken wanting to believe I can still believe. Another 'MARCH", another protest, another commission, another meeting, another minister called to calm the community, ANOTHER, ANOTHER, ANOTHER AND N O T H I N G C H A N G E S! I am looking back 600 years in this country's history, only to see so much of the "SAME"!!! THEN, I waited for the old standby, and sure enough it came.
The old and young Black ministers - suited up and in lockstep with the "white representative" - "GOD's will be done", but whose GOD are they talking about. I know only ONE GOD, the one who protects the least of these, "CHILDREN". The most vulnerable, "ELDERLY". The one whose love knows no boundaries and insist that we SPEAK TRUTH TO POWER. He has given us the power to redeem ourselves, not by sitting in man-made temples, but by pooling our resources to protect our children and elderly. To raise our voices with our votes and money to help us relearn how to be self sufficient and empowered in the womb of our African mother. Rest assured that when we learn to model our ancestors, whites will learn RESPECT and from whose womb they come!!

NJYankee, because that's all we know for sure. He was walking in the street on the way to his grandmother's house. And per the police chief, the police officer did not know that he was accused of shoplifting and bullying the shopkeeper, and that probably wouldn't even be allowed in court.

As for your question for Mr. Meredith, I would never dare to speak for such a giant of American history.

I will point you to http://www.eisenhowerfoundation.org/d...">this Kerner Commission report done after the urban riots of the 1960s. "Looting" is often an element of uprisings done for very valid reasons. That doesn't mean the looting is good; but it does mean that fixating on such a symptom is very shortsighted and won't solve anything.

This issue with Ferguson, regardless of the specific facts, is that African Americans are sick and tired of their unarmed children being killed by police officers and other whites, often without arrests, real investigation or prosecution. They are right about that, and our full society needs to try to understand the issue and help solve it. Otherwise, we are not civil, democratic or much more "free" than we were 50 years ago.

I'm sick of people talking about looting during a riot, as if there's anything surprising about that. Any time chaos breaks out, there will always be some who take advantage of the sudden shift in police priorities. If there's ever a riot in a poor community with no looting, now THAT would be news worthy. Urban riots will always have looting, broken windows, and fires. Being obsessed about that stuff conveniently ignores talking about what started the riot in the first place. Which, in this case, is still quite hazy.

I agree, skantman. I posted the following under my column this week; reposting:

It tickles me a bit to see Tea Partiers complain about the Ferguson protesters looting and destroying property. They, after all, named themselves after a group of protesters who dressed up as American Indians and destroyed a whole boat load of tea belonging to the East India Tea Company. Because they were mad at the government for mistreating them. Just sayin'.

Not to mention, there are SO many destructive "white" riots/looting/destruction incidents we could list, including Ole Miss when Mr. Meredith enrolled.

Does everyone reading this http://en.wikipedia.org/wiki/Rosewood...">know about Rosewood? Vital history.

Or the http://en.wikipedia.org/wiki/Tulsa_ra...">Tulsa riot against blacks?

Let's just say that African Americans didn't come up with the practice of riots, looting or property destruction.