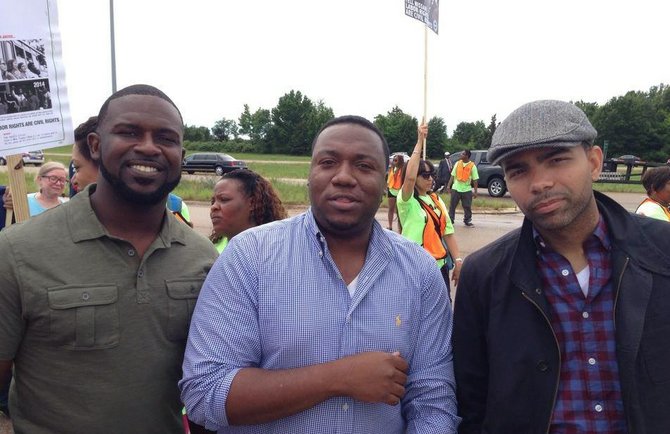 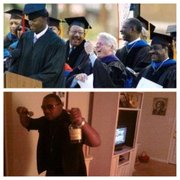 C.J. Lawrence, a Jackson attorney asked a provocative question on Twitter in response to the shooting death of 18-year-old Mike Brown in the St. Louis area. Which of these photos would the media use if police gunned Lawrence down?

Which of Lawrence's hundreds of publicly available photographs would the mainstream media organizations use in news reports if he were the victim of a police shooting, like 18-year-old Michael Brown in Ferguson, Mo., on Aug. 9?

The day after the shooting, Lawrence, a 33-year-old defense attorney in Jackson, posted two photos of himself on Twitter and asked which would be used "#iftheygunnedmedown," referring to the police.

In the top image, Lawrence wears a graduation gown and mortar board and stands at a podium during his 2003 commencement at Tougaloo College. Sitting behind him is former President Bill Clinton, red-faced and laughing. That image is juxtaposed with a dimly lit photo of Lawrence holding a bottle of Hennessey cognac.

Ironically, Lawrence, who managed social media for the city of Jackson under late Mayor Chokwe Lumumba, was engaging in social commentary in both pictures. In the graduation shot, he was making a joke about then-President George Bush's opposition to affirmative action policies. In the photos with the bottle of liquor, which he said was actually filled with Coca-Cola, he was satirizing Kanye West's infamous intrusion on Taylor Swift at the 2009 MTV Video Music Awards.

After the succession of shooting deaths of unarmed black teenagers in recent years, including 17-year-old Trayvon Martin, news media have often used less flattering images of the victims, even when better pictures exist. Lawrence says he wanted the hashtag to simply raise awareness about the Michael Brown shooting incident.

"All I was trying to do is get it out to the people I follow and who follow me," Lawrence said this morning.

Then, the hashtag exploded. Within a few hours, his smartphone battery died as a result of 300 to 400 Twitter notifications. By 5 p.m. Sunday night, Twitter notified him that #iftheygunnedmedown was a trending topic on the popular network. For a time, it was the No. 1 trending topic in the world, he says.

Most remarkable for Lawrence was to see Palestinians, who have been under heavy siege from Israeli armed forces in recent weeks but often clash with Israel, communicating with protesters in Ferguson about how to survive a tear-gas assault.

Lawrence has continued to promote the hashtag, but never sought recognition as its creator. Still, he has done interviews with the BBC, WJTV in Jackson, Mississippi Public Broadcasting, an NPR-affiliate and several other media outlets. This weekend, he and several activists from Jackson plan to caravan to St. Louis in support of protestors.

He believes Jacksonians should pay close attention to events as they unfold in Ferguson.