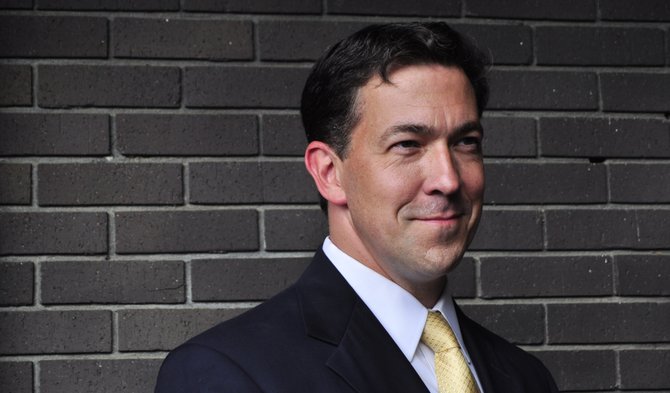 Chris McDaniel's campaign distributed its 250 pages of evidence to members of the news media, as well as the Republican party officials. However, the evidence the McDaniel campaign offers poses just as many questions as it purports to answer. Photo by Trip Burns.

Only thing, the presented evidence does not appear to add up to a pattern of election irregularities substantial enough to force a new election the McDaniel campaign hoped for. Not even the Mississippi Republican Party thinks the McDaniel camp's claims warrant a hurried meeting of the state executive committee to review all the documents. On the night of Aug. 6, the state GOP punted and told McDaniel to take his issues to a state court instead. They have until Aug. 14 to seek judicial review.

McDaniel's campaign distributed its 250 pages of evidence to members of the news media as well as the Republican Party officials. However, the evidence the McDaniel campaign offers poses just as many questions as it purports to answer.

For example, Exhibit A of the complaint is a CD of, among other things, an interview a man named Patrick Frey conducted with a woman with knowledge of a vote-buying plan. Frey is a colleague of California blogger Charles C. Johnson, who has been covering the Senate race for conservative online news organizations.

In the complaint to the state GOP, McDaniel lawyers say the recording is Julie Patrick, a Republican poll worker in a predominantly Democratic precinct of Marshall County.

"She describes her observations of voters leaving her precinct discussing how to use the vouchers they were given to get paid for voting," the complaint states.

However, the recording is actually of a woman relaying what her mother told her about her experience at the Marshall County polls.

The woman in the recording indicates that her mother watched the bailiff leave the precinct several times to make phone calls and then heard the bailiff instructing voters how to cash in vouchers that she handed out. "She was very upset and felt like they were buying votes," the woman said.

Frey did not return calls for this story. Another inconsistency arises out of the story of a Meridian minister who previous alleged that he was integral in a plan to buy African American votes on behalf of the Cochran campaign.

On Thursday, Aug. 7, Hood spokeswoman Jan Schaefer told the Jackson Free Press that the AG's office is still investigating the allegations but that "our investigators' report shows that Mr. Fielder told them that Mr. Noel Fritsch paid him $2,000 for his recorded statement. We make no representation as to Mr. Fielder's veracity."

Initially, Johnson claimed he paid Fielder for text messages that implicated Cochran campaign managers of vote-buying. Now, Johnson said Hood has spouted off and the Attorney General's office is protecting him.

Fritsch reiterated to the JFP in a statement on Aug. 6 that Johnson paid for texts from Cochran staffers that suggested the Cochran campaign paid Democrats $15 to vote for him in the June 24 runoff. He said the texts are consistent with the interview in which Fielder told Johnson about the vote-buying scheme.

Johnson said many people questioned Fielder in the beginning and that Fielder expressed fear for his safety after he told Johnson his story.

"So first Fielder's a fraud, and now Fielder must be telling the truth even though he's changed his story a few times now. And what's changed in the time from which he told this story? Oh, he got a lot of pressure and a lot of calls from various people intimidating him, as he said to me," Johnson said.

Ultimately, the McDaniel camp wants to show one thing: Cochran won because of Democratic—or black—votes that shouldn't have been cast. On the fifth page of the complaint, McDaniel lawyers cite an analysis showing that votes for Cochran increased from the June 3 primary to the June 24 runoff in each county in correlation with the percentage of blacks who live in that county.

"(T)he percentage of blacks and non-blacks who make up each county's population shows that, without the predominantly Democrat (sic) voter participation in the Republican runoff, Cochran would have lost the runoff election by about 25,000," the official complaint states.

In other words, the McDaniel camp is not happy with the way presumably Democratic black voters voted by crossing over into the Republican runoff—therefore, their votes should not be counted. But the laws that allow a challenge to Democratic votes in a Republican runoff are foggy and loosely applied, as long as the voter didn't vote in the Democratic primary. Since the McDaniel investigation only turned up an alleged 3,500 crossover votes, it would seem their numbers don't support their claim.

One Hinds County voter listed as a crossover voter in Precinct 34, Tripp Segars, is a proud Democrat, but he didn't vote in the Republican runoff on June 24.

"I voted in the Democratic primary only. I didn't participate in any runoff," Segars said. "After speaking with Mr. McDaniel's lawyer, Mitch Tyner, I understand there was a check mark by my name for June 24. Now what does that checkmark mean? I guess there's no way to tell at this point."

The mix-up could call into question the validity of the 3,500 crossover votes the McDaniel campaign claims to have found, as well as the effectiveness of voter ID laws.

Mississippi's primary election statute not only prohibits crossover voting but also states that "no person shall be eligible to participate in any primary election unless he intends to support the nominations made in the primary in which he participates."

In the 2008, a federal court found that a challenge could only be made, in this case, against Democratic votes cast in a Republican primary if the voter "openly declares that he or she does not intend to support the nominees of the party," once the challenge has been properly initiated. Otherwise, intent cannot be inferred.

This is presumably why the election challenge binder is filled with Facebook posts documenting Cochran voters' plans to vote for Childers in the general election.

A woman named Cathy Clark writes, "Nothing I did today was corrupt...my vote was legal...no money...no bribe...just strategy!!!! I'm not pro Cochran...just anti Chris!!! #it's politics #Childress (sic) in November!"

Only six Facebook posts are included in the challenge binder that suggest voters for Cochran intend to vote Democratic in November. Further, it is unclear what about the 9,500 "irregular votes" cited in the challenge makes them illegal, challengeable votes.

Nick Mason, whose Facebook comment appeared in Exhibit E of the complaint, told the Jackson Free Press Thursday he was "just being a smartass."

"As a democrat, I voted for Thad 6 times so far today!" Mason wrote on June 24. Mason, from Ocean Springs, Miss., said he thought it was hilarious that McDaniel lawyers included his comment along with the complaint, and said he did indeed vote for Cochran in both the Republican primary and runoff. He does, however, plan to vote Democratic in November and knows that voting in one primary with the intent to cross party lines for the general election is prohibited in Mississippi election law, but said, "That's Mississippi law and it won't hold up in court."

No where did Chris's case say anything about blacks it stressed Democrat areas. But the press seems to look at Democrats as blacks.

The McDaniel camp absolutely complains, in its filing, about the participation of black voters in the June 24 runoff - noting that the 10 counties where Cochran's support between the primary and the runoff increased the most are the 10 most predominantly black counties in the state.

It uses Hinds County as an example, citing the fact that Cochran's support increased by 7,955 votes between June 3 and June 24 in the "majority black and predominantly Democrat county."

An analysis of results, it added, reveals that "...with the percentage of blacks and non-blacks who make up each county's population shows that, without the predominantly Democrat voter participation in the Republican runoff, Cochran would have lost the runoff election by about 25,000 votes."