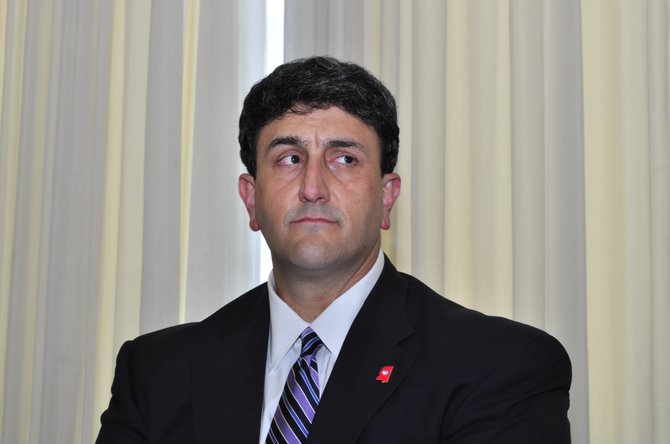 Mississippi Democratic and Republican Party chairmen Joe Nosef (pictured) and Rickey Cole are grappling with what the U.S. Senate primary means for their respective organizations in future elections. Photo by Trip Burns.

In that contest—which will go on a little longer due to a long-threatened formal challenge that state Sen. Chris McDaniel announced this week—an armchair candidate Thomas Carey received just enough votes to prevent either of the major candidates from drawing a plurality.

Undoubtedly, the quirks of this race make it a perfect specimen for examination in political-science courses across the nation. But it also comes with real-world consequences for Mississippi political parties that have to build organizations, groom candidates and raise money for elections every year. If the Mississippi Senate race—in which Cochran picked up about 8,000 votes, chiefly from heavily Democratic counties and involving outreach to African Americans—represents a new electoral paradigm, what should the parties do to adjust?

Joe Nosef, the chairman of the Mississippi Republican Party, remains uncertain whether his party's Senate primary, which African Americans helped decide, was an anomaly or the way parties have to do business from now on.

Nosef cited a 2012 poll in which young voters said they would support President Barack Obama's re-election despite his low approval ratings. "That says to me they don't see the Republican Party as an option," the state GOP chairman said.

Mississippi Democratic Executive Committee Chairman Rickey Cole said the participation of Democratic constituencies in the GOP primary was "a one-off deal," not a new campaign model.

"It was related more to reacting against McDaniel than anything," Cole said, adding that the race did not slow fundraising for Democratic nominee U.S. Rep. Travis Childers.

"I think the Republicans have got a diversity problem, and they've got to spend a lot of time reaching out beyond upper-middle-class Anglo-Saxon males to continue to have a strong constituency base in Mississippi," Cole added.

Democrats, through Childers, are attempting to strike a populist chord against Republicans. In his remarks at the Neshoba County Fair July 31, Childers stressed raising the federal minimum wage, equal pay for equal work among men and women, and expanding health-care access with Medicaid expansion.

Cole echoed Childers this week when addressing the John C. Stennis press luncheon in Jackson. He blasted Gov. Phil Bryant and the Republicans for refusing Medicaid expansion, which would give 300,000 more people in Mississippi health insurance "because (the Republicans) don't want to do business with Barack Obama."

Democrats will likely use the same set of talking points entering the 2015 statewide elections, where they will attempt to regain control of the Mississippi House of Representatives. Republicans seized the House in 2011 for the first time since Reconstruction and hold a five-seat majority there.

Cole, the Democratic chairman, said he would like to see the Legislature take on some election reforms, including multiplying filing fees for political offices by 10. Currently, to run for the U.S. Senate and governor, the fee is $300, a sum Cole calls ridiculous.

"If you can't come up with three-grand, you're not a serious candidate. We wouldn't have had this runoff if (not for) the candidate from DeSoto County who never campaigned. All he did was bring his $300 to Jackson," Cole said.

Nosef said primary-elections overhaul could come from Republican Secretary of State Delbert Hosemann, or from McDaniel himself, who chairs the Senate Elections Committee and could pursue reform if he returns to the body in 2015.

"I think we're going to talk about a lot of things," Nosef said. "I certainly don't want anything that comes out of this (election) to damage our outreach efforts because it's critical the party grows."

There is also some partial push-back on Mr. Cole from Democrats for telling us who to vote for in the Democratic primary.