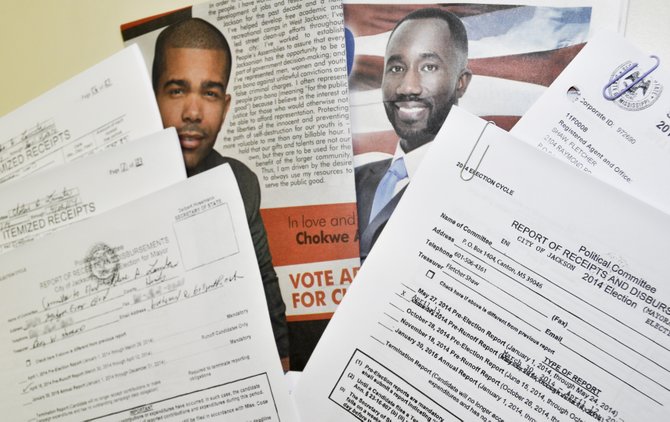 The recent Jackson mayor’s race demonstrated just how weak the state’s laws are on municipal elections. Photo by Trip Burns.

In the waning days of the April 22 special-election runoff for Jackson mayor, third parties, surrogates and political-action committees took control of the political discourse and broadcast airwaves to become the strongest forces in the election, more than the two candidates in some ways.

Whether the chaos and confusion these groups might have caused affected the outcome of the election in which Councilman Tony Yarber defeated Chokwe A. Lumumba, the son of Jackson's late mayor and an attorney, by 2,424 votes is debatable. But what is clear is that the involvement of these third-party organizations highlights the need for strengthening Mississippi's local election laws.

"There's no practical enforcement of the law," said one individual long active in politics, but who declined to be named.

Several individuals who have experience in local elections agreed that there is little to stop an organization intent on keeping the identities of political donors, or itself, a secret. In the weekend preceding the Jackson election, a PAC called Citizens for Decency launched an all-out blitz with negative ads against Yarber.

Yarber responded by seeking an injunction against using what his attorneys said was copyrighted ministry material, which he had posted on YouTube, but took down earlier in the campaign.

Earlier in the election cycle, another PAC known as ENI, which lists a post office box in Canton as its address, reported raising $25,000 for the Jackson mayor's race. The majority of the PAC's expenditures went to two political-consulting firms that list no address. State records show that J & J Consultant, which received $7,500, is owned by Minnie and Stephen Johnson of Tunica. The other recipient, B & H Consultants, is not registered as a business with the state.

A patchwork of state law and agency rules make it even more difficult to decipher who should be reporting political activity to the public. Article 23 of the state election code does not differentiate between municipal and state elections and says political committees must register and outlines penalties for failure to file campaign-finance reports. Late reports can draw a $50-per-day fine.

The statute also says: "Any candidate or any other person who shall wilfully (sic) and deliberately and substantially violate the provisions and prohibitions of this article shall be guilty of a misdemeanor and upon conviction thereof shall be punished by a fine in a sum not to exceed ($3,000) or imprisoned for not longer than (six) months or by both fine and imprisonment."

However, the law is not clear on which agency enforces the law. The state constitution designates the secretary of state as the chief elections officer in the state with "the power and duty to gather sufficient information concerning voting in elections in this state" and who is required to "submit an annual report to the Legislature, the governor, the attorney general and the public."

The Jackson special election saw violations of multiple requirements—from the near-illegible handwriting on Lumumba's reports, to insufficient information on the ENI filing, to the complete lack of a report from Citizens for Decency. Republic Group, which says it placed all television advertising for Tony Yarber, is not listed in his reports, although the group, part of Hayes Dent Public Strategies, confirmed receiving 15 percent of all TV ads placed, about $3,450 of the $23,000 Yarber reported he spent. Together, bookkeeping discrepancies underscore the weakness of Mississippi's laws on municipal elections.

In addition, candidates for public and incumbent are supposed to file statements of economic interest with the Mississippi Ethics Commission.

Of the three members of the Jackson City Council who ran for mayor, neither Ward 7 Councilwoman Margaret Barrett-Simon nor Yarber had filed SEIs regularly. Yarber has one SEI on file for 2013 and submitted another statement, for 2009, on April 18, four days before the election, that the Ethics Commission is currently reviewing; Barrett-Simon insists she has filed the documents.

Secretary of State Delbert Hosemann told the Jackson Free Press in an interview last summer that his office does not have jurisdiction over municipal elections and primarily looks at the integrity of the state's 1,800 voting precincts, such as whether there is disability access but that the office isn't equipped to oversee municipal elections.

"We have an (elections) staff of about 10, and we do monitor all of the statewide races. I don't know that we could drill down to municipals," Hosemann told JFP.

Hosemann painted the scope of the problem from his office's perspective: Mississippi has 350 municipalities or so. In a normal election year, the number of candidates can number in the thousands.

"It is, I'll tell you, frustrating when they don't provide the financial disclosure. I think that's key to individuals making a decision—to follow who your campaign contributors are. But I don't know that we as the secretary of state's office have the capacity to really reach down and in a 30- or 60-day election and run down a thousand different candidates," Hosemann said.

As of press time, the Citizens for Decency has filed neither the required statement of organization with the Mississippi Secretary of State's office, nor has it submitted records of financial disclosure.

The secretary of state's 2014 Candidate Handbook, political committee must file a statement of organization within 10 days of receiving or spending in excess of $200, meaning that Citizens for Decency has until Tuesday, April 29, at the latest to file with the state.

As the state's largest city, Jackson should be able to write an Ordnance that would compel organizations and individuals to register if they lead PACs, must file financial documents related to their campaigns, etc. if they seek to influence Jackson City or Hinds County Elections. We, the People, should expect fair elections, where the candidates lay out the case for their election with a minimum of "mudslinging." I am tired of the dirty tricks being played (I'm looking at YOU, Not-So-Precious Martin!)!