Big Questions in the Home Stretch 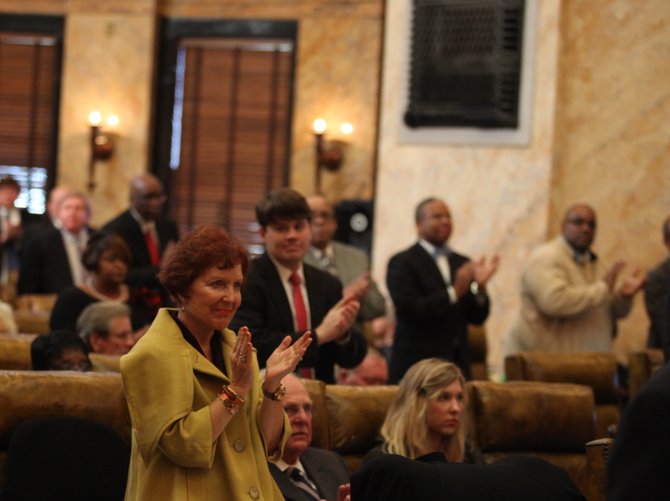 State Rep. Rita Martison, R-Madison, has sponsored legislation that could be a boon to the capital city. Photo by Amile Wilson/File Photo

A Republican-sponsored bill could clear the way for economic-development projects in downtown Jackson, including around Farish Street and for a convention-center hotel.

State Rep. Rita Martinson, R-Madison, sponsored House Bill 1358, which expands tourism projects that can participate in a state sales tax incentive program to include hotels "located within a historic district where the district is listed in the National Register of Historic Places," as well as the building of hotels with a $10 million or higher price tag.

Such an incentive package could breathe life into the dormant Jackson convention-center hotel plan, officials said. The bill is currently in conference and represents hope for the city of Jackson's legislative agenda.

Walter Zinn, the city's lobbyist, added that the city also secured legislative approval that would give the city an additional two years worth of bonding authority for the 1-percent sales tax, which if projections are accurate, could draw another $30 million into the city's coffers.

Last weekend, lawmakers agreed to borrow about $200 million for construction projects around the state, including a handful of organizations based in Jackson.

The Museum of Mississippi History and Mississippi Civil Rights Museum, which broke ground October 2013, will receive $14 million toward construction on the $80 million project, slated to be completed in time for the state's bicentennial in 2017.

In addition, the Museum of Natural History in Jackson and the Jackson Zoo, which recently obtained national reaccreditation, both got $500,000.

Before the session began, hopes were high for Jackson. Mayor Chokwe Lumumba's charm offensive seemed to be working early, but his sudden death threw the city's legislative agenda into limbo.

On March 25, the Jackson City Council voted unanimously to approve a professional-services contract with lobbyist Donna Echols. City officials say the late mayor was working to hire Echols before his passing.

Zinn, the city's policy chief, said: "In light of the mayor's passing, it helped having her around," he told the Jackson Free Press Monday.

Senate Bill 2681, Mississippi's version of the Religious Freedom Restoration Act, is back before the House and Senate After controversy over the proposal has ebbed and flowed, causing several rewrites, the bill is back to its original state.

The bill met opposition from civil-rights group who said the bill could hark back to Jim Crow by permitting businesses to cite religious beliefs in turning away customers.

A House version toned down the most controversial language, but instead of agreeing to the House's changes and sending it to Gov. Phil Bryant, the Senate asked to negotiate the language. The bill also added the phrase "In God We Trust" to the state seal.

Eighteen states have a similar law on the books. In an interview with Associated Press this week, Bryant said he would sign the bill if it reaches his desk. It remained unclear whether either chamber would vote on the measure before the Jackson Free Press went to press. Watch jfp.ms for updates.

A Deal for Teachers

Senate and House conferees came to an agreement late Monday on what turned out to be a surprisingly thorny teacher pay raise proposal.

The conference report, which the House and Senate must agree on, would give teachers and additional $1,500 starting July 1, 2014 and $1,000 starting July 1 of next year. In the third, borrowing from the Senate proposal, the state would put a merit-based pay system in place for teachers in "A" and "B" schools or any school that improves one letter grade in a year. The Legislature will also develop a pay plan for high-performing teachers in "C", "D" and "F" schools later.

Education leaders such as Nancy Loome of The Parents Campaign also remains worried about a plan to provide $6,000 scholarships to families of special-needs children to use that critics say lack accountability because the money could go to private academy, for-profit virtual school or other non-public school.

"It does nothing to serve the interests of children with special needs. It's still just a bill to privatize and 'profitize' public education," Loome stated in a letter to supporters.