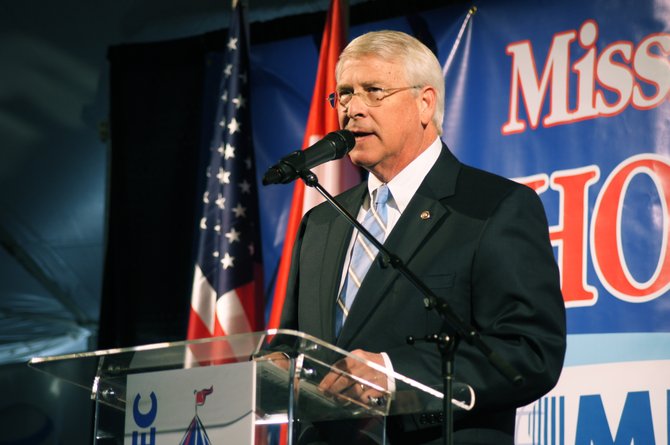 Republican U.S. Sen. Roger Wicker is going to keep trying to repeal Obamacare even though it's not going to happen anytime soon. Photo by R.L. Nave.

More than three years after Congress passed the Affordable Care Act, and a week before a key provision of the health law takes effect, Mississippi federal lawmakers continue vows to repeal Obamacare.

"I remain a staunch opponent of the president's health-care law and will continue to fight for its full repeal. Our aim should be true health-care reform, not policies that force families and businesses to shoulder higher costs," Mississippi's junior U.S. Sen. Roger Wicker wrote in his weekly newsletter. "Repealing this costly, intrusive law is the first step toward real reform."

Parts of the law have already taken effect and numerous attempts to repeal Obamacare have been unsuccessful. Congressional observers note that future attempts to dismantle the law would also meet failure.

Tuesday, Oct. 1, marks the first day individuals will be able to purchase health insurance on new, federally mandated marketplaces, or exchanges. And parts of the law that have taken effect already appear to be making a difference, new data show.

The U.S. Census Bureau put out new 2012 poverty statistics last week which show that the number of people who lack insurance—one of the main reasons for poverty in the U.S.—continues to decline due, in part, to Obamacare. The recent drop is smaller than the decrease witnessed in 2011, when a provision of the health law that increased coverage for young adults occurred.

Meanwhile, poverty in Mississippi—which is one of the nation's least healthy states based on a number of indicators—remains high. The Census report shows that Mississippi's 2012 poverty rate of 24.2 percent leads the nation. Overall, the number of people in poverty rose during the Great Recession, but the national poverty rate remained unchanged at about 15 percent.

Mississippi, which was one of only three states that saw an increase in the poverty rate, along with California and New Hampshire, also has the lowest median income in the nation: $37,095 compared to the national average of $51,324.

Mississippi officials delivered another potential blow to the citizens they represent last week. Three Republican members of the state's four members of the U.S. House of Representatives, voted to slash nearly $40 billion over 10 years from the federal food stamp program, a 5 percent reduction to the nation's main feeding program that more than one in seven Americans use.

By state, Oregon led the nation in food stamp use at 20.1 percent, or one in five, due in part to generous state provisions that expand food-stamp eligibility to families. Several more rural or more economically hard-hit states, including Mississippi, Kentucky, Maine, Michigan and Tennessee followed Oregon in the rankings. Wyoming had the fewest citizens sing food stamps.

In anticipation of open enrollment for the health-care exchanges, a coalition of health-care advocates, doctors, faith leaders and others have launched an educational web portal called Cover Mississippi.

"Despite the challenges, there is an historic opportunity for the advocacy community and providers to come together and connect Mississippians with what could be life-changing health insurance," said Roy Mitchell, executive director of the Mississippi Health Advocacy Program in a release.