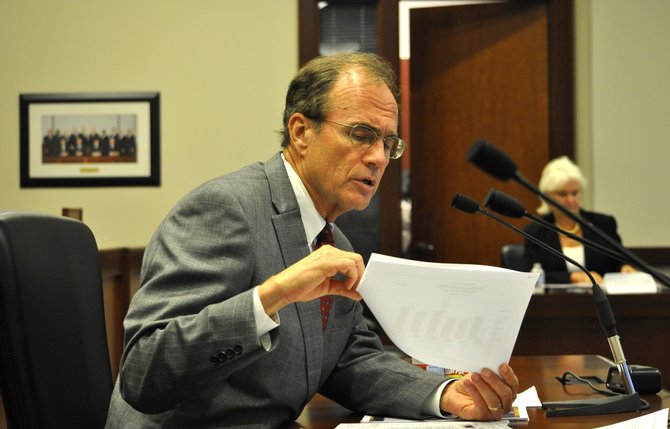 Mississippi Secretary of State Delbert Hosemann plans to have the state's voter-identification law in place by spring or summer of 2014. Photo by Trip Burns

Lt. Gov. Tate Reeves may be adding a new skill to his resume: investigative reporter.

Reeves, who is chairman of the Joint Legislative Budget Hearings taking place this week in Jackson, had his staff—which includes his communications director, who used to be a newspaper reporter—dig into state-agency spending, and is asking pointed questions of agency heads making their annual appropriations requests.

When Brent Christensen, the newish executive director of the Mississippi Development Authority, presented his agency's request for a 3 percent increase over last year's $21.5 million budget, Reeves took Christensen to task over several line items from the past fiscal year.

One such expenditure Reeves singled out was MDA's practice of using proceeds to pay for its financial-resources division, which Christensen said has eight employees. Reeves said salaries should not be paid from bonds, which are often long-term debt the state takes on.

"Whoever made that decision, however many years ago, made a mistake," Reeves said before turning his attention to MDA's use of the state plane.

Specifically, Reeves wanted to know the agency's policy for using the plane and for in-state and out-of-state travel. He particularly wanted information about 14 trips on the state-owned plane where Christensen was not on board, and another expense for sending 15 employees—at an average of $3,000 each—to the annual Mississippi Picnic in New York City's Central Park this past June. Christensen defended the trip, saying it included meetings with economic prospects plus the picnic.

"It's a great opportunity for us to combine our economic development and tourism," Christensen said.

"What we're trying to do this time, this year, is really drill down to some of the individual expenses," Reeves told reporters after Monday's meeting.

In the past, lawmakers specified how much money agencies could spend on certain categories, such as travel, salaries, supplies and office space. For the past two years, they've given directors more flexibility to manage a lump sum of money.

A few agencies, including the Forestry Commission and the state treasurer's office, are requesting more than 20 percent increases in their budgets.

"Because this office handles hundreds of millions of dollars a day in banking transactions—$25 billion annually—it is imperative that we attract and retain accounting and investment specialists," Hilton said. "Over the last three years, the Office of the State Treasurer has seen a 48 percent employee turnover rate. The main retention issue is due to staff being underpaid and leaving to work elsewhere."

Secretary of State Delbert Hosemann continued his practice of slashing his own department's spending and asked for 3 percent decrease, or about $1 million, less than his fiscal-year 2014 budget.

Hosemann also restated that with a recent landmark U.S. Supreme Court decision, which struck down provisions of the 1965 Voting Rights that were holding up the implementation of Mississippi's voter ID law, he expects the law to be in place by the 2014 congressional primaries.

Hosemann is considered to be a strong contender for the U.S. Senate seat if Sen. Thad Cochran chooses to retire, but has said he would not challenge Cochran in the Republican primary. Hosemann added that his office has not tapped any of the $100,000 the Legislature appropriated for legal fees related to voter ID implementation.

Voter ID, which supporters say would help stamp out voter fraud, passed through a voter referendum in 2011. Rep. Angela Cockerham, a Magnolia Democrat—the only woman and one of two African Americans on the committee—asked Hosemann for the number of voter fraud prosecutions in Mississippi.

"I have no idea, ma'am," Hosemann responded.

State revenue has grown about 5 percent annually for each of the past two years, while spending has increased about 2 percent a year. The Budget Committee will release its spending recommendations in December, and the full House and Senate will adopt a budget in the spring.

It's not about "voter fraud". This is why Hoseman responded, "I have no idea, ma'am" when asked about the number of identified cases presented for prosecution in Mississippi.

So, it's not about "voter fraud"; it's about voter suppression.

It's entirely about voter fraud. Like Mr. Hosemann, I have no idea how many such cases have been presented for prosecution in Mississippi, or anywhere else. However, I do have a good idea how difficult it is to prosecute voter fraud, which is precisely why voter ID is such a no-brainer. Just think how different life would be if every crime could be stopped before it is committed, rather than allowing the crime to occur and then spending valuable time and money on prosecution and punishment! Obviously, that is an impossibility with most crimes, but here we have one for which prevention is not only possible, but extremely straightforward and simple. I look forward to the day when ID laws eliminate the need for that segment of voter fraud prosecution.

The only voters who will be suppressed due to ID laws are those of the multiple or dead varieties.

Notmuch: I'm curious... can I count on your support for my 2A-ID plan?

Wouldn't it be safer for everyone if people had to register for a special identification in order to own a gun? We could include literacy tests, gun proficiency tests, vision tests and so on.

Totally circumvents the weaknesses in background checks... if you don't have your 2A-ID, you can't buy or register your gun.

If you're worried about the costs, I'm sure we could roll this out at the Department of Safety office... it could be an addendum to your driver's license, etc.

I'm not familiar with your 2A-ID plan, and I'm not sure why a literacy test would be appropriate for gun ownership. Gun proficiency tests? That makes sense to me, but keep in mind that I also think driving proficiency tests should be required:) Vision tests? On the surface, that seems like it should be mandatory for gun ownership; however, arguments are currently taking place in some states regarding the right of legally blind people to own guns. I can understand why such a person would want the right to keep a gun in his house for protection from home invaders. I'm not worried about the costs--there are very few things in life that do not require some regulatory expense in addition to the cost of the activity itself.

"We could include literacy tests, gun proficiency tests, vision tests and so on."

I don't recall anyone being asked to qualify for ID's to vote.

"I don't recall anyone being asked to qualify for ID's to vote."

It's apparent that you know little, if anything about MS voter qualifications. MS was the poster state evidencing the need for the Voter Rights Act. It hasn't been that long that Black folks could not vote period and when they were permitted to vote, it was with the skill of interpretation of the constitution, being able to look at a jar of jelly beans and giving the correct count, knowing how many bubbles there are in a bar of soap and signing your name on waxed paper. These are just a few of the "qualifications".

js1976 stated that he (or she?) did not recall anyone being asked to qualify to obtain a voter ID, and you mentioned requirements from a time (that "hasn't been that long" ago), which obviously have nothing to do with voter ID. Please let me know if you have information that voter ID will require the skills mentioned, so I can inform Delbert when I see him at Mass this Sunday.

Jess, I'm speaking of the current Voter Id requirements. I'm am well aware that prior to the Voting Rights Act minorites were discriminated against in regards to voting.