Stokes: Hinds Should Cash in from 'One Lake' | Jackson Free Press | Jackson, MS

Stokes: Hinds Should Cash in from 'One Lake' 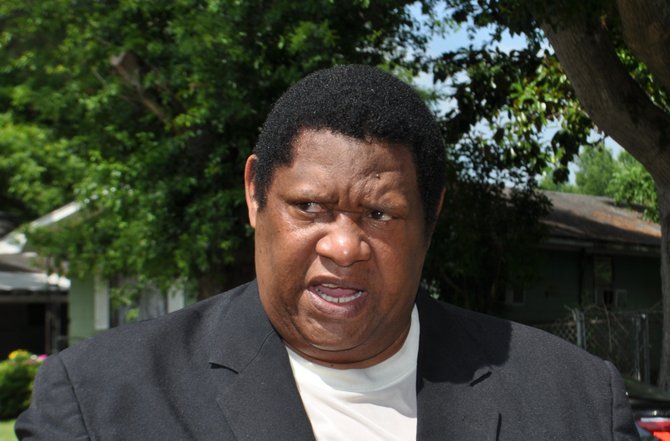 Hinds County District 5 Supervisor Kenneth Stokes wants to ensure that the purported economic benefits from the proposed One Lake plan are evenly distributed between counties. Photo by Trip Burns

Despite still being years away from any dirt moving on the so-called One Lake project that aims to mitigate flooding and provide business opportunities along its shore, one member of the Hinds County Board of Supervisors wants to make sure that Hinds County gets its fair share.

"We want a commitment that not all the economic development takes place on the (Rankin) side," said Supervisor Kenneth Stokes this morning. Stokes represents District 5 on the county board.

The Rankin-Hinds Pearl River Flood and Drainage Control District—aka the Levee Board—manages the levees in those counties and is working with the nonprofit Pearl River Vision Foundation, the brainchild of oil wildcatter John McGowan, to conduct a feasibility study of the One Lake plan among other flood-control options for the Pearl River.

The One Lake plan consists of damming the Pearl to make a 1,500-acre lake in the Jackson area, which theoretically could reduce flooding along the river and its tributaries, including Town Creek, which goes through the city.

In addition, developers could sell valuable land along the shoreline to homeowners and businesses, which would help fill the coffers of the counties and cities that abut the lake.

Socrates Garrett, a developer and publisher of the Mississippi Link newspaper, who represents Hinds County on the Levee Board, said it's too early in the process to discuss economic development.

The U.S. Army Corps of Engineers, which oversees flood control, must review the feasibility study and approve the project. Development is not a factor in the Corps' decision-making, Garrett said.

Congress has authorized $133 million for flood control in Jackson. Dallas Quinn, PRVF's spokesman, said the feasibility study should conclude in spring or summer 2014 and the Corps could take up to six months to review it.

Of course he wants to make sure Hinds gets its fair share! Stokes can't take any money under the table for developments on the Rankin side.