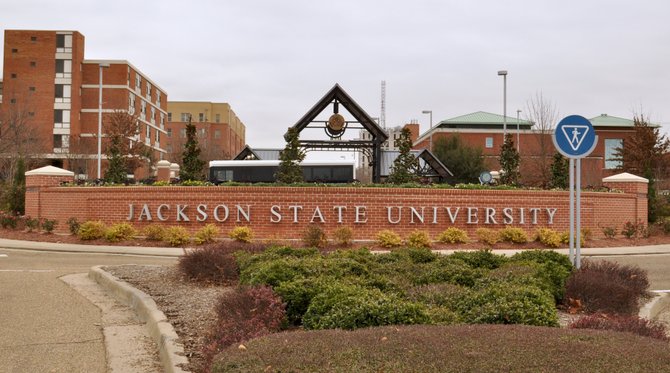 Diversity at Jackson State University took a hit recently when the school lost 27 Brazilian students, whose consulate withdrew them after a series of thefts. Photo by Trip Burns.

Over the weekend, 27 students from Brazil withdrew from Jackson State University following three incidents dating back to the summer in which the students were victims of crime.

The most recent incident happened the evening of Nov. 9, when a male student says he was robbed at gunpoint as he was leaving the campus cafeteria. The student, who asked that his name not be printed, said two male assailants, each brandishing a handgun, demanded money, but the student didn't have any.

He and his fellow Brazilian students were at Jackson State as part of a science, technology, engineering and math development program sponsored by Brazil's government, but were not enrolled in the university. Apparently, the attempted armed robbery was the final straw, and the consulate decided late last week to pull the students out of JSU and move them to another school in the southeast.

Another student said that on Nov. 8 his backpack bag that contained his cell phone, dorm keys and a favorite sweater disappeared while he played volleyball at the recreation center. The student, who asked to be identified only by his first name, Joao Pedro, said he reported the theft to campus police, but he never got his stuff back; he also contacted the consulate.

Even though it was the only time he had ever had anything stolen while attending the school, Joao Pedro said his confidence was shattered.

"It became clear that we couldn't walk the university alone," he said.

The first incident happened over the summer, when a student named Brenda said she was leaving the cafeteria after breakfast and a man snatched her iPhone and ran away.

Several students who spoke with the JFP believed insufficient lighting outside of the cafeteria was partly to blame. Eric Stringfellow, executive director for JSU communications, said Tuesday night that problem has been addressed.

Julio Del Castillo, president of the Latin American Business Association, said the incidents are a black eye to JSU and to Jackson but that he also doesn't believes the robberies are part of a pattern.

"Latinos, African Americans, Indians and whites, in my experience get along really well ... Hopefully this incident will not affect the city as narrative," Del Castillo told the Jackson Free Press today.

"I personally review the daily incident reports, and the university regularly reviews the effectiveness of our safety efforts, the actions of our personnel and safety procedures and protocols. To our knowledge and records, the incidents involving the students visiting from Brazil were random, which does not make these incidents acceptable, nor are they indicative of our campus environment.”

Jackson State lost their right to host Fulbright students two years ago because of institutional fraud by the university. It seems like these international programs, instead of being opportunities for American and international students to engage each other in academic and personal alliances, are used as cash cow opportunities for some crooked and criminal staff of Jackson State University.

This is so sad. I love JSU. These punks need to be dealt with before we lose more promising students who are afraid to walk on their own campus.

Before we give JSU a black eye, let's compare these event to other MS schools. We live in a time and place where our colleges and Universities have become towns/cities within themselves. All aspects of life are present. You have a few bad apples that will do things that can change the entire landscape of the environment.

There have been rapes, murders, robbers, beatings, deaths associated with fraternities during HELL week (hazing) supposedly outlawed, fraud and abuse of financial systems and the list goes on.

Maybe the missing piece for JSU is the need to educate students, all students, to the idea of possible criminal activity in their environment. How many of us, during high school have put a purse down and someone stole the purse or for sure the money? If a bag was left unattended while the young lady played a game, anything could happen. I was a College Freshman in 1968. I lived on campus. We were told never to walk at night along; travel in pairs. We were also told to use the campus bank; don't keep large sums of money in your dorm room or purse.

I guess my point is that students are going to have to live defensively because the punishment for stealing is not the cutting off of the thieve's arm, at best, he/she will be expelled from school.

I'm not trying to make light of this situation; however, I do believe that there were other steps to be taken short of moving the entire group (27) of Brazilian students.

"Maybe the missing piece for JSU is the need to educate students, all students, to the idea of possible criminal activity in their environment."

This is probably even more crucial when dealing with international students considering they are not as familiar with our country as we may be.

Sounds like an insincere , heartless, 'word track' response from the university. I would like to know what exact measures had been taken after the report of each incident--was more police/security force added?, was additional lighting installed? were there lockers for students to lock their valuables? Seeing the drastic action by the Brazilian consulate, I assume the consultant there had been at least one discussion before yanking all the students. 27x tuition should have added more security. Much/most of the blame lies with the homegrown students--they know who doesn't belong around there. They just don't have the courage to confront or even report the perps to the police.

As far those commenting that educating and making aware the criminal nature of the campus misses the point. Why would a student want to go to any campus if they lived in fear of walking alone, constantly being on edge of robbed, etc. The are thousands of campuses around the globe for international students to attend in which they do not have to deal with that.

If you keep doing what you're doing you will keep getting what your getting.

This isn't a new problem at JSU. Its problem that both HBCUs and HWCUs struggle with, which is how to manage security and ensure safety on a campus that must remain an open and inviting environment for students, visitors, and the surrounding communities. Chances are the gunmen who robbed the student outside the cafeteria aren't even JSU students, but managed to sneak past campus security (which isn't hard at that location). Its difficult to keep unauthorized people out of a campus that isn't completely walled off from its surrounding neighborhoods.

Exactly. Securing the perimeter should be #1 priority. What student wants to live in fear? Millsaps is right downtown and its has secured access. I don't believe its students live in fear and don't believe they have near the frequency of crime as JSU.

Just a point of clarification: The Brazilian students were not enrolled in Jackson State, and were not paying tuition to the school.

Sorry, but you're wrong: every student at my program has a full-time tuition paid, corresponding to the year we spend in the US. So yes, all 27 students paid the full tuition, no discounts.

Just a point of clarification: The Brazilian students WERE ENROLLED in Jackson State, and WERE PAYING MUCH MORE TUITON TO THE school because they were international students. The university lost by year with each student $75,000.00. Thank you.

Christopher, taking precautionary measures doesn't have to equate to "living in fear". I agree that ensuring the perimeter is secure should be the #1 priority, but these students that come to an unfamiliar area should be aware of the potential dangers that surround them. You can't expect them to stay within a fenced perimeter 100% of the time.