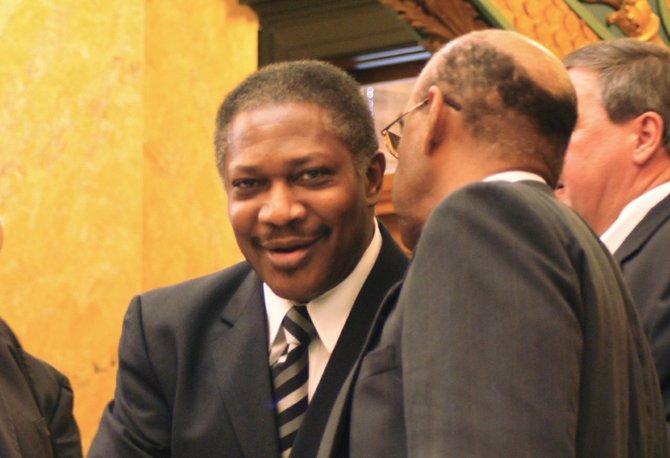 Hours after state Sen. John Horhn (center) hosted a forum to fight what he called the "recent onslaught of crime in Jackson," Horhn himself contributed to the city's crime problem by being arrested on DUI charges. Photo by File Photo

Hours after state Sen. John Horhn hosted a forum to fight what he called the "recent onslaught of crime in Jackson," Horhn himself contributed to the city's crime problem by being arrested on DUI charges.

Police arrested Horhn, a Jackson Democrat, just before midnight Thursday near Callaway High School. Horhn's arrest followed a community meeting that he convened at the Mississippi Capitol for people to get together and talk about their experiences with crime.

Horhn said at the start of the meeting that a "tipping point" for him, which prompted him to hold the meeting, was the murder of 7-year-old Jaidon Hill, who was killed with his mother and stepfather earlier this month. The family, who lived in Brandon, had been missing for about a week before investigators discovered their bodies in Copiah County. Police arrested and charged two Jackson men in connection with the deaths.

"I don't know what was going on with the adults in that family, but that child did not deserve to die," Horhn said at the Capitol, eliciting nods of approval and applause.

Data from the Centers for Disease Control and Prevention show that of the 1,210 traffic deaths among children through the age of 14 years in 2010, approximately 17 percent involved an alcohol-impaired driver. Overall in 2010, about 10,228 people died in alcohol-related car crashes, representing nearly one-third of all the nation's traffic-related deaths.

At Horhn's forum, there was little discussion of crimes such as DUIs. Most of the conversation centered on property crimes that young people commit for fast cash. Of the more than 100 people who attended, many had stories about being victims of smashed car windows, stolen cars, home and business burglaries, and home invasions.

Many attendees offered solutions that ranged from getting churches involved, building community centers for young youth activities, incarcerating more people for longer periods of time, more prayer. Horhn's idea was to create a multi-jurisdictional task force that includes the Jackson Police Department, Hinds County Sheriff's Office, Mississippi Bureau of Narcotics and other agencies similar to the multijurisdictional effort that led to the arrests in the slaying of Jaidon Hill and his parents.

Some participants offered alternative perspectives on fighting crime, however. Jackson Mayor Chokwe Lumumba, whose eldest son, Kambon, was shot in the head years ago but survived, stressed the importance of maintaining the proper perspective on crime.

"Anywhere you go in the world where you have bad economics and bad education, you have crime," said Lumumba, noting that his office is growing the city's public-works department as the city version of a stimulus program and is participating in Alignment Jackson, a consortium of government agencies and nonprofit groups working on education in the capital city.

"Stop talking about crime," Cloy implored. "Crime is not the problem—crime is a symptom of the problem."