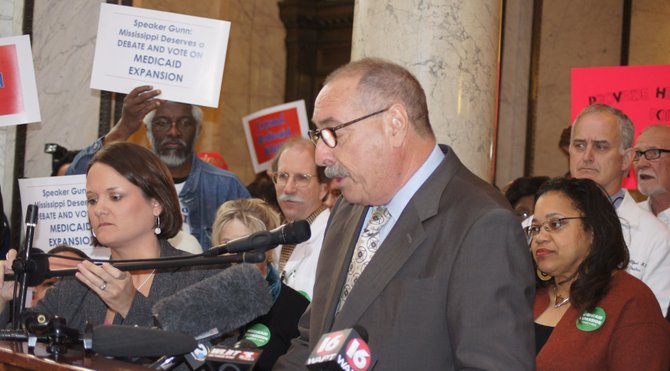 Sharon Williams worked for the state of Mississippi for 29 years, performing clerical work for agencies that oversee food-stamp benefits, human services and Medicaid. Now 51, Williams lives on $1,143 monthly income from Social Security Disability and is hoping that she can enroll in Medicaid.

Williams' story is typical of the 39,000 people in Mississippi who are older than 50 but not yet 64 years old, the age at which people start receiving benefits from Medicare, the federal health-care program for senior citizens.

Williams is fearful that three decades of lifting, bending, pushing and pulling will take more of a toll on her body as she gets older, and she worries about the cost of paying for health care.

"If I get a catastrophic illness, I wouldn't be able to pay for it," she told the Jackson Free Press Wednesday.

Sherri Davis-Garner, the state director of AARP Mississippi, said people who fall in the 50-to-64 age range are not considered working poor, typically, and therefore are not eligible for Medicaid under the current guidelines, leaving them without health insurance of any kind.

AARP is one of about two-dozen member organizations of Mississippi Health Care Access, a nonprofit formed to advocate for state's Medicaid expansion allowable under the 2010 federal Affordable Care Act.

The state Senate passed a Medicaid reauthorization bill earlier in the session that contained language to allow lawmakers to debate the issue. The Senate passed the bill despite Lt. Gov. Tate Reeves' personal opposition to the ACA, which he and fellow Republicans deride as "Obamacare."

When the Senate bill reached the House, Speaker Philip Gunn, R-Clinton, killed it. Meanwhile, Democrats led a charge to kill the House's Medicaid reauthorization, leaving the fate of the entire program uncertain.

The Rev. John Taylor, who operates the Jackson-based John Taylor Gospel Ministries, said not expanding Medicaid would hurt the blue-collar hospital workers his ministry serves, such as janitors and cafeteria workers.

Hospitals are especially interested in Medicaid expansion. Starting next year, hospitals stand to lose millions in federal funds that have historically offset the cost of caring for poor people who can't afford to pay their hospital bills. In addition to making up for the loss of those funds, health-care experts estimate that Medicaid expansion could create as many as 9,000 new jobs in the state.

"It's time to put people over politics," said Sam Cameron, executive director of the Mississippi Hospital Association, during yesterday's rally.

If the Legislature does not renew Medicaid before the end of the session in early April, Gov. Phil Bryant will likely have to convene a special session to get it done before the program expires at the end June.

At the very least, Davis-Garner of AARP would like to see expansion get an up or down vote.

"If you don't let legislators vote on the issue (of Medicaid expansion), you're taking the vote away from the people," she said.