The Business of Beer 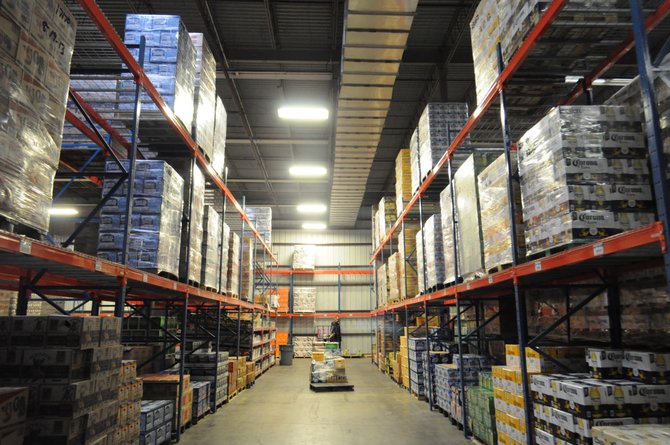 Jackson-based Capital City Beverages is one of the state’s largest wholesalers, servicing about 1,100 accounts in the Jackson metro. Across the state, beer wholesalers had sales of $289.7 million and paid $34.7 million in taxes in the 2012 fiscal year. Photo by Trip Burns.

Southern Prohibition Brewing Co. will become Mississippi’s third brewery when the company starts canning two beer varieties, initially for sale in Hattiesburg in April and Jackson in May.

"Gentlemen, sale of beer in Mississippi is now legal," Mississippi Gov. Sennet Conner proclaimed to a large gathering of reporters and curious legislators stationed just outside his chamber door on the afternoon of Feb. 26, 1934.

The Mississippi House of Representatives, which was working through a busy calendar, met the news of the governor's beer bill signing with such delight that the body abruptly adjourned for the day, the members setting off to throw back a good cold--and, now, legal--bottle or two.

Up to that point, and since, Mississippi has had a bittersweet relationship with the bitter brew. A quarter-century before, Mississippi was the first state to ratify the 18th Amendment, which outlawed the sale of alcohol in the United States and launched the Prohibition era. Mississippi had outlawed all liquor in 1907.

By the time Conner signed Mississippi's law, which permitted the sale of beer and wine that contained 4 percent alcohol, the state had not even officially ratified the 21st Amendment that repealed Prohibition; that would not happen until 1966.

But even for the teetotaling Conner, legalizing beer made sense given its economic upsides. Consider that on the eve of Prohibition's repeal in 1933, one projection estimated that beer would create as many as 50,000 badly needed jobs in the throes of the Great Depression.

Conner, seeing the writing on the wall, said of his decision to finally sign the bill: ""I think the time has come for the people to settle the issue."

Last year, after several failed attempts, Mississippi lawmakers made it legal to produce and sell beer containing as much as 8 percent alcohol. In the eight months since, that state's beer businesses have grown enormously and are poised for even more growth.

Before the new 8-percent-alcohol-by-weight law took effect in July 2012, Mississippi was home to just one brewery, Kiln-based Lazy Magnolia. Since then, five companies throughout the state have announced plans to start brewing Mississippi beer this year. Restaurants have also benefited from being able to offer their clientele expanded varieties of more flavorful, higher gravity beer.

"The average person that two or two years ago didn't know what the term (craft beer) is, is now trying to experience that," said John Neal, owner of the Keg and Barrel in Hattiesburg.

Neal, who moved to Mississippi from Houston, Texas, in 1995, has increased bar seating by one-third and added 80 seats and installed another bar in the pub's outside patio area. He also built an outdoor stage with amphitheater seating, doubled the parking area and hired 12 more people--all in the eight months since the beer law was implemented.

Another of Neal's projects is helping develop the Southern Prohibition Brewing Co. Quinby Chunn, Southern Prohibition's owner, said the company will can Devil's Hornet, an extra-pale ale, and Suzy B., a dirty blond ale, for sale initially in Hattiesburg in April and Jackson in May. Two seasonal beers, a watermelon wheat called Deez Melons and, for the fall, a coffee-oatmeal stout called Hipster Breakfast, are also in the works.

"Let's be honest, the South--we're always slightly behind. In some things that's not bad; in others it is. But I really think we're catching up quickly," Neal said.

The rise in popularity of craft beer has mirrored the growth in popularity of gourmet and specialty foods over the past three decades in the United States as Americans' palates became more sophisticated and increasingly adventurous customers craved more unique culinary experiences.

The National Association for the Specialty Food Trade, a group representing the gourmet food industry, estimates that specialty food items rang up $70.3 billion in sales in 2010, about 13 percent of all retail-food sales.

Part of the specialty-foods trade, the craft-beer industry, experienced 13 percent growth by volume and 15 percent growth in retail sales from 2009 to 2010. Compare this trend to that of the overall U.S. beer market, which saw a 1.3 percent decline in 2011 to $96 billion, or 200 million barrels, the American Craft Beer Association reports.

That trend is proving profitable to Mississippi beer businesses. While private companies hold their revenue information close to the vest, data from the Mississippi Department of Revenue illustrate that beer is a big part of the state's economy. Beer and wine taxes represent more than $30 million in annual revenues to the state, DOR data show. In the 2012 fiscal year, wholesalers reported $289.7 million in sales and paid $34.7 million in taxes compared to $279.7 million in sales and $34.4 in taxes the previous year.

"If you look at the number of beers we have now, compared to the number five years ago, it's more than doubled," said Frank Drennan, president of Capital City Beverages, a Jackson-based wholesaler for MillerCoors products and other brands such as Corona, Heineken, Abita, Lazy Magnolia, and others.

States imposed the three-tiered beer distribution after prohibition, to keep the power of the immense American brew makers in check. Under this setup, brewers could not distribute or sell their products directly to customers.

Drennan's grandfather, Salvadore Bertucci, started F.E.B. Distributing Co. on the Mississippi Gulf Coast, in 1934. The beer business was brisk in those days. After the first months of Prohibition's repeal, the New York State Brewers Association estimated that the beer sales in that state would total about $430 million in federal, state and local tax revenues--approximately $7.4 billion in 2013 dollars.

In the 1940s, several members of the Bertucci family moved to Jackson and started a new distributorship. Frank Drennan joined the company in 1971, when the beer industry was in a state of upheaval. Schlitz, the company's largest client, started losing market share in the late-'70s, so Drennan started looking to bring in other brands that had not been in the Mississippi market, including Miller in 1985 as well as Becks, Corona, Sierra Nevada, Anchor Steam and Samuel Adams.

"We did some of it for survival and some of it because I like beer," Drennan said. "It's a constant change in the way people perceive beer and the way they drink it. Since the alcohol law changed, it opened a lot of new breweries for us, and we made some decisions to bring some new beers--some beers that we would never have had the opportunity to bring in before."

Beer insiders credit local restaurants for driving a lot of the growth in Mississippi's beer economy. Mike Cashion, executive director of the Mississippi Restaurant and Hospitality Association, said members of his organization see craft beer as a huge new growth sector in terms of beer and equipment sales as well as around special events that focus on beer and food pairings.

"I don't think we've ever tapped the tip of the iceberg in this sector," Cashion said.

National information on the growth of craft beer illustrates the potential in the beer market. In 2011, the volume of craft beer sold grew 13 percent to 11.5 million barrels, compared to 10.1 million barrels the previous year. Also, craft brew's sales of the overall beer market was 9.1 percent in 2011, up to $8.7 billion from $7.6 billion in 2010.

"Across the country, people are pairing food with beer, and these kinds of beers just open that up because they're so much more complex. If you can buy a really good Belgian--a Saison Dupont or a Chimay or Yazoo or an Abita--all that does is continue to build on that," said Brian Drennan, Capital City Beverage's sales director, general counsel and Frank Drennan's son.

Another change in Mississippi law that is now in the works could spur another beer boom. Mississippi lawmakers are considering a bill to clarify the state laws governing at-home beer hobbyists. Sen. John Horhn, D-Jackson, sponsored the legislation, which passed the Senate.

To legally brew beer in the state, a person has to buy a $1,000 permit from the Mississippi Department of Revenue. The law doesn't allow such permits for home brewers, which leaves home brewers facing fines if they get caught. Horhn's bill would exempt individuals who make less than 100 gallons and households making less than 200 gallons of suds per year from the state beer regulations, differentiating between commercial sellers and hobbyists. Hobbyists could not sell their home brews, and the law would not apply to "dry" counties, where any sale of alcohol is illegal.

About 750,000 people home brew in the United States, according to the Boulder, Colo.-based American Homebrewers Association. Home brewing is at the center of craft beer culture.

Craig Hendry, president of Raise Your Pints, a group that lobbied for changes in the state's beer laws, believes that home brewing could lead to even more new breweries opening here.

As evidence, he points to the state's largest home brewing festival, the Outlaw Homebrew Competition, which the Keg and Barrel has hosted for the past three years. One group of winners, Gluckstadt-based Lucky Town Brewing Co., are now professional brewers.

Chip Jones, a Lucky Town co-founder, said since the company started distributing its Ballistic Blonde Belgian-style ale and The Flare Incident, an oatmeal stout, sales have done well. The company is planning to unveil a third style soon, Jones said.

"We're just trying to keep up with demand. Every week it seems like it gets more and more hectic," Jones said.

In addition to just getting beer to its more than 64 accounts in the Jackson metro area, Vicksburg and northeast Mississippi regions, Jones said the company regularly receives requests from restaurants wanting to hold special events and from private-party planners.

"One of the things driving the craft-beer movement is the localization of it," Jones said. "Everybody wants to eat local, drink local, support local businesses. It's encouraging to see all the excitement around beer in Mississippi."