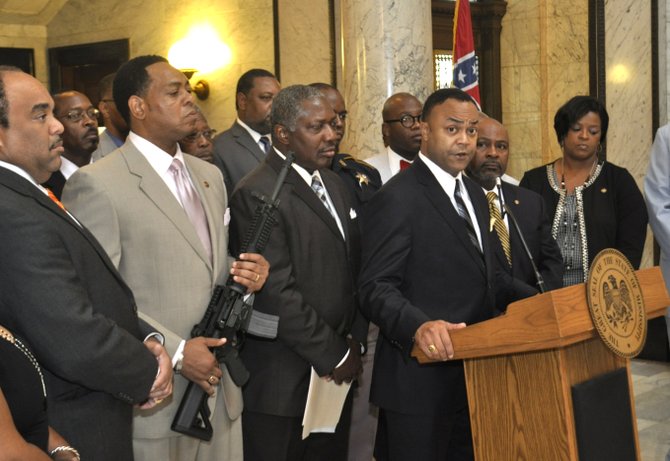 Hinds County District Attorney Robert S. Smith said this morning that he has not ruled out seeking a temporary restraining order to prevent a new law from going into effect that will permit Mississippians to openly carry firearms.

As a result of a change passed during this year's regular legislative session, individuals will be able to carry weapons in plain view without a permit starting July 1. Mississippians will still need a permit to carry concealed weapons, however.

Smith joined Mississippi lawmakers, members of the Mississippi Legislative Black Caucus, at a press conference this morning where they announced their intention to challenge the new law. Smith said his office is in talks with state officials to come up with an alternative to the open-carry law.

The district attorney also called the law confusing for both citizens and law enforcement officers.

"It's difficult to determine who is a threat, and (who) isn't a threat," Smith said.

"This law shouldn't be on the books in Mississippi," Sen. John Horhn, D-Jackson, said.

State Sen. Derrick Simmons, D-Greenville, who is also a defense attorney, said the law could initiate so-called "Terry stops" in which police can stop and question citizens. The term originated from a 1968 U.S. Supreme Court decision, Terry v. Ohio, where the court held that police could briefly detain someone who they reasonably suspect may be involved in criminal activity. Such suspicion falls short of the police burden for making an immediate arrest. A simple traffic stop could be a Terry stop, for example.

A constable was on site to let an AR-15 be used for effect.

Citizens stopped for openly carrying guns do not necessarily have to submit to police questioning; however, the law is unclear whether a person's failure to answer officers' questions provides probable cause for a more invasive search or an arrest.

Sen. Sollie Norwood, D-Jackson, fears that the law will put more young people into contact with the police and could increase the number of arrests. He has had informal conversation with Jackson Mayor-elect Chokwe Lumumba about his concerns.

"Folks are scared what it means for society," Norwood said.

Why is that dude in the photo holding a rifle?

"Terry stops". Interesting. Good angle, and yet another notch in the belt explaining why law enforcement wouldn't want this law passing either. I'd hope that the restraining order means that Jacksonians or individuals within Jackson city limits CANNOT "enjoy" the fruits of this law. I like that. Gives a big fat middle finger to Phil and the supporters of this measure by law officials in the capital city.

Lets see, they have had 3 months since the end of the legislative session, and now 3 days before it is implemented they meaning Legislative Black Caucus, start crying, seems like a photo op to me, and the legislature is breaking law now by having a firearm in the capital and not being a law enforcement officer. I bet the Judge will be a black female Circuit Court Judge in Hinds County!!!!!!

I suspect it's a reminder of what kind of weapon is allowable under the state's new open carry law, Bill Jackson, but ultimately, I suppose you'll have to ask him. Per the photo caption: "Legislative Black Caucus Chairman Sen. Kenneth Wayne Jones, D-Canton, displayed a semi-automatic weapon at the June 27 press conference."

What makes you think open carry will be any different here than in the other 28 states that allow it?

There is no photo caption on the mobile app. Pardon me for asking.

hmm, haven't been posted yet, rifles per say wouldn't be considered "concealed" because of length. Also the rifle which is a AR-15 has a sling, which would be carried over shoulder that would make it seen by anyone.

No need to be snotty, Bill Jackson. The JFP didn't hand the guy a rifle as a photo prop.

The story is about open-carry, not concealed carry.

I wasn't being snotty. Just replying to your remark re the caption.

Does Sen Jones have his enhanced weapons permit? If he doesn't he is violating the law by have a firearm in the Capitol building. Prop or not. He needs to be arrested.

In all seriousness I'm confused about the permit issue. I'm not a gun owner. So can someone purchase a semi-automatic weapon on the internet without a permit and then because of the new law, be allowed to openly carry the weapon?
And aren't there consequences if you are openly carrying this weapon and then start to threaten someone with. You are dead before the first 911 phone call. The statistics for death and injury by a gun are going to skyrocket!

883maple- concealed carry permits and even open carry have nothing to do with purchasing a gun over the internet or purchasing on at a local store. You don't have to have a permit to by a gun. However, despite what the anti gun crowd says, if you do buy a gun over the internet it has to be shipped to a firearms dealer who runs the background check on you before you can take possession, buy Federal Law. He is holding that modern sporting rifle ( illegally in the Capitol Building) because it scares the un-informed like you. And yes it is and always has been against the law to threaten someone with a firearm, whether you are openly conceal carrying has nothing to do with that. Really no other state that has open carry has had any increase in gun deaths or injuries Mississippi won't either, people are getting worked up over nothing.

833 Maple, I'll try and shed some light on the issue. There are no changes being made to the current concealed weapon permits, but to the existing open carry laws. It is already legal in Mississippi to openly carry a wearpon as long as it's not concealed. You would need a permit to conceal it legally.

The new bill alters our current open carry laws so that an individual can carry a weapon in a holster. Currently a holster would be considered partially concealed thus making it illegal. If you purchase a weapon online, it must be shipped to someone with an FFL. That individual would be responsible for obtaining the proper paperwork before turning over the weapon.

If you openly carry a weapon, and threaten someone, you will can certainly be charged unless the other individual was acting in a threatening manner.

Further, the FFL dealer does run a federal background check on the purchaser.

Here's a question for you. Why is the Senator "wielding" a firearm in violation of the law? Next, how did he get his hands on it? He is not a law enforcement officer. So the Constable gave it to him, under what authority? Next question, since the Capitol Police Chief violates the law by not allowing people with enhanced carry into the capitol armed, a law that the legislature itself passed, why is he allowing assault rifles in the Capitol and why does he allow members of the legislature (30-40) inside the Capitol with handguns, but not citizens with enhanced permits? Lastly, isn't it a violation of Senate/House rules to enter armed?

JFP, why don't you go ask those questions???? Then we couldn't say this is a biased story.

ok... thank you. Didn't realize we always had an open carry law. Still don't like this.