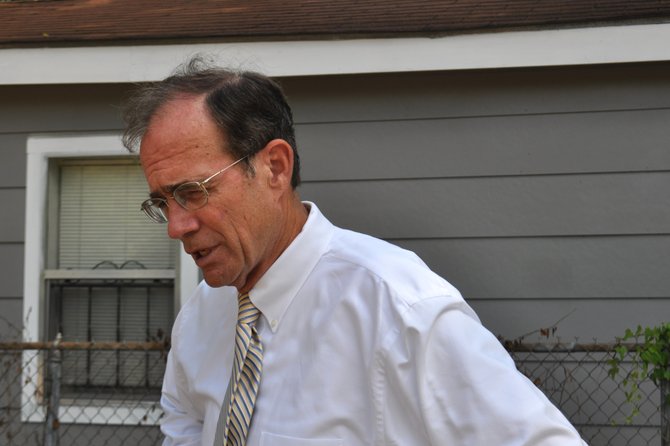 In a May 6 interview, Mississippi Secretary of State Delbert Hosemann told the Jackson Free Press that if the Supreme Court invalidated Section 5, he believed voter ID would no longer be subject to preclearance. Photo by Trip Burns

It wasn't terribly surprising given the composition of the U.S. Supreme Court, but the nation's high court officially gutted the most important provision of the 1965 Voting Rights Act in a ruling this morning.

In the case known as Shelby County, Ala., v. Eric Holder, the court ruled 5-4 along philosophical lines to invalidate Section 4 of the act, which outlines the formula by which jurisdictions are mandated to obtain special permission called "preclearance" to make changes to voting laws.

The jurisdictions covered under preclearance—Section 5 of the act—include mostly southern states with a history of racial discrimination affecting elections, but also applies to some northern cities such as New York City.

The court did not address the constitutionality of Section 5, which means that Congress could develop a new formula that meets constitutional muster.

In a May 6 interview, Mississippi Secretary of State Delbert Hosemann told the Jackson Free Press that if the Supreme Court invalidated Section 5, he believed voter ID would no longer be subject to preclearance.

"It would save us a lot of money 'cause we have to prepare a lot for a submission," Hosemann told the JFP at the time. "It's taken us about a year to get the submission where it is today. It takes a lot of time and effort by a lot of people to put that in, but that time and effort, to me, is not wasted."

Hosemann added that even without preclearance, Mississippi would still have to comply with Section 2 of the act, which bars the state from implementing discriminatory voting laws.

"For example, you couldn't say that Catholics can't vote, which we tried to do in Mississippi, or that women can't vote, which we tried to do—or the Jim Crow laws, which we also did. There's a whole series of things that have impeded people's right to vote and that comes under the constitutionality portion (of the Voting Rights Act). So the preclearance would go away but individuals who may challenge voter ID would still have the ability to question the constitutionality of it," Hosemann said.

In his majority opinion, Chief Justice John Roberts noted that the "the Voting Rights Act of 1965 was enacted to address entrenched racial discrimination in voting, 'an insidious and pervasive evil which had been perpetuated in certain parts of our country through unremitting and ingenious defiance of the Constitution.'"

The opinion reads like a primer on southern civil-rights history. Roberts mentions the murders of three voting-rights workers near Philadelphia, Miss., in 1964 and "Bloody Sunday" in Selma, Ala., in 1965, in which police beat and tear-gassed protestors who were marching for voting rights.

Arguing for invalidating Section 4, Roberts said times have changed since those events. He wrote: "Today, both of those towns are governed by African American mayors. Problems remain in these states and others, but there is no denying that, due to the Voting Rights Act, our nation has made great strides."

To underscore his point, Roberts includes a chart of voting participation changes between 1965 and 2004 in the six states subject to Section 5 pre-clearance of Alabama, Georgia, Louisiana, South Carolina, Virginia and Mississippi. In five of the six states, including Mississippi, the rate of black voter turnout in 2004 exceeded white turnout.

More liberal-leaning justices Ruth Bader Ginsberg, Stephen Breyer, Sonia Sotomayor and Elena Kagan joined in dissenting. Writing the minority opinion, Ginsburg gave a history lesson of her own, which draws on dubious attempts to suppress voting rights in Mississippi in the not-so-distant past.

Among them: "In 1995, Mississippi sought to reenact a dual voter registration system, 'which was initially enacted in 1892 to disenfranchise Black voters,' and for that reason, was struck down by a federal court in 1987," Ginsburg wrote. She adds, "In 2001, the mayor and all-white five-member Board of Aldermen of Kilmichael, Mississippi, abruptly canceled the town's election after 'an unprecedented number' of African-American candidates announced they were running for office. (U.S. Department of Justice) required an election, and the town elected its first black mayor and three black aldermen."

Without Section 5 serving as a stopgap, Ginsburg believes such discriminatory laws would have gone into effect.

Other Mississippi officials and civil-rights activists also reacted to the decision.

"I am pleased the U.S. Supreme Court found the formula on which Mississippi is judged under the Voting Rights Act is outdated. However, the practice of preclearance unfairly applied to certain states should be eliminated in recognition of the progress Mississippi has made over the past 48 years," Republican Lt. Gov. Tate Reeves said in a news release.

"Today's decision is a setback to our democracy and the voting rights of real Americans," Henderson said in a statement. "We can't allow discrimination at the ballot box and must prevent minorities from having their votes purged, packed, gerrymandered, and redistricted away. No one should be fooled by the Pollyannaish fantasy that voting discrimination no longer exists. As the Court acknowledged, voting discrimination still exists and Congress may draft another coverage formula. We urge Congress to act with urgency and on a bipartisan basis to protect voting rights for minorities."

This story has been updated.

Finally, can Mississippi join the rest of the Union, please?

Secy. Hosemann's released the following verbatim statement this afternoon: “The United States Supreme Court placed Mississippi on equal footing with every other State. The Court’s decision removes requirements for Mississippi to travel through the expensive and time consuming Federal application process for any change to state, county, or municipal voting law. Mississippi citizens have earned the right to determine our voting processes. Our relationships and trust in each other have matured. This chapter is closed. The process for implementation of Constitutional Voter Identification begins today. It will be conducted in accordance with the Constitutional Amendment adopted by the electorate, funded by the Legislature, and regulations as proposed by the Secretary of State.”

Not sure what you mean, Darryl.

This statement is hilarious given Hosemann's push for voter ID in Mississippi:

"Our relationships and trust in each other have matured."

So just who is it that can't be trusted to vote without proof of citizenship? Oh yeah: We the people.

Donna, seriously? I would think that Mr. Nave's quote from Secretary Hosemann would be self-explanatory. After plus-minus 50 years, Mississippi is free of (some of) the shackles that the majority of the Union enjoys.

The fact that Secretary Hoseman would mention the word "trust" speaks volumes. Do I trust certain political or societal factions with my "due process" and "equal rights" and "protection"? H*ll No! There is always a hidden intent and purpose designed to prevent access to certain groups of people related by ethnicity and/or economics.... I have learned to work with all groups of people but I always have to watch my back.