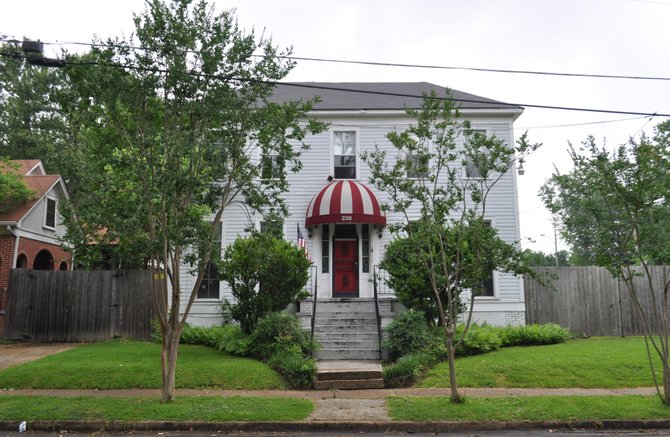 Jackson-based Grace House provides housing for people with HIV, but advocates say state policy makers should do more to prevent the spread of the disease. Photo by Trip Burns

Othor Cain has a theory about the prevalence of HIV/AIDS in the African American community.

Cain, chairman of the board of directors at Jackson-based HIV/AIDS nonprofit Grace House, pointed to the upward trend in HIV infection rates for men, particularly black men who have sex with men.

In 2011, males represented 75 percent of newly reported HIV infections. Mississippi's male infection rate is three times higher than women. But while the number of HIV cases statewide for African American women fell from 147 in 2007 to 117 cases in 2011, by comparison, the number of cases among black males has held steady in the same time period at 318.

The stigma Cain and other advocates for people living HIV say exists in the black community also extends to Mississippi policymakers.

Efforts to slow the spread of HIV/AIDS in Mississippi have not fared well in recent years. During the most recent legislative session, for example, state lawmakers introduced three bills that would have helped people infected with the HIV virus, or who have AIDS, but all of the proposals died in committee.

Rep. Jim Evans, D-Jackson, sponsored a bill to require the Mississippi Department of Corrections to test people upon their release from prison. Rep. John Hines, D-Greenville, had two bills to appropriate money for HIV/AIDS services to the state health department. The only successful piece of HIV/AIDS legislation was in recognition of a local doctor who functionally cured a baby of the human immunodeficiency virus.

Advocates say policy inaction at the state level trickles down and has real-world effects on people with HIV who face discrimination in employment and housing because of their status.

Just three organizations in Mississippi focus on providing housing for people with HIV/AIDS. Grace House, which receives no money from the state of Mississippi, is the largest with 16 slots in its transitional program and seven spaces for permanent residents. All of Grace House's funding comes from the U.S. Department of Housing and Urban Development and private sources such as the MAC Cosmetics AIDS Fund.

People with HIV/AIDS who face discrimination are getting some help through a joint program of the University of Mississippi Medical Center, Mississippi Center for Justice, Mississippi State Department of Health's Crossroads Clinics Central and Jackson Medical Mall Foundation. The program provides legal help related to HIV-status discrimination in housing and employment.

"This program will help ensure they are treated fairly so they can lead productive, fulfilling lives," said Marni von Wilpert, a fellow at the Mississippi Center for Justice.

More than 10,000 Mississippians now live with HIV infections, regardless of the stage of the disease (meaning the number includes people with AIDS). Of that number, 25 percent live in Hinds County. Jackson has the fourth highest HIV-infection rate of all U.S. metropolitan areas, and black men are the only group to experience an increase in infection rates in the past five years.

"Numerous legal provisions, including constitutional amendments, discriminate against homosexuals, and state sex-education laws marginalize lesbian, gay, bisexual and transgender (LGBT) youth. In Mississippi, the criminal law penalizes those with HIV for failing to disclose their positive status, an approach that public-health experts deem likely to undermine, rather than promote, the public health," the report states.

Specifically, the study notes Mississippi's sex-education policies contribute to one of the nation's highest rates of sexually transmitted disease and teen births in the nation.

"The HIV/AIDS epidemic in the southern U.S. has been particularly devastating for minority communities," the report's authors state.

"Mississippi's failure to embrace evidence-based approaches in the face of increasing health threats to minority populations conflicts with fundamental principles of human rights."

Cain understands the fears that have paralyze policymakers in Mississippi, but he believes more educating--of lawmakers and citizens--about HIV is necessary. Cain said: "HIV is not the dreadful sentence it used to be."

It is indeed upsetting that the state with one of the worst HIV rates in the nation receives so little support. Federal dollars provided under the Ryan White act are in danger, and the money provided by HUD is drying up.

It's ironic that here in the Deep South, so many fundamentalists (including many, if not all, of our state senators and representatives) are adamant about judging what they THINK the LGBT and other minority populations of our state are doing with their lives. If they were just as opinionated and proactive about ending poverty, providing equal opportunity education ,reinstalling sex education curriculums in school, and the like, Mississippi would become more of a progressive state that would attract prominent enterprises and talented individuals (and keep our many talented residents here) to want to come to Mississippi and live. Jesus was more opinionated and proactive about helping those that were least helped and ostracized BY THOSE who are supposed to be making positive changes in a city, region, state, or country: our leaders in government!