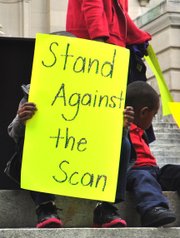 After a long delay, the state is implementing a controversial finger-scanner program for poor parents. In fall 2012, child-care providers and parents rallied at the Capitol to protest the plan.

Nine months after state officials holstered a plan to require all parents receiving federal child-care assistance to scan their kids in and out of day care every day, Mississippi is moving forward with the controversial plan.

In July 2012, Mississippi's Division of Early Childhood Care and Development, which administers the federal child-care subsidy, or certificate program, started testing a new system to pay child-care centers. The pilot program, designed to streamline the way child providers get paid, requires low-income parents to scan their fingers into a database when picking up and dropping off their children.

In the early implementations, the pilot program touched off many complaints about technical problems with the finger-scanning equipment and software, and resulted in a lawsuit from one child-care provider that remains pending. DECCD then held public hearings last fall on the program and decided to delay its full rollout.

Carol Burnett, executive director of the Low-Income Childcare Initiative, concedes that the providers she represents do get paid faster but said the electronic reports often contain errors.

"I still have concerns," Burnett said. "I haven't seen any real effort from (the Department of Human Services) to correct the problems."

In her letter, Dent said her agency had learned a lot from the finger-scan pilot program.

"We have been testing this system with licensed providers for several months, and are confident in this program's ability to accurately capture attendance of children in your care and speed up the payment process," Dent states in her letter.

Aside from the buggy computer systems, providers cite privacy concerns and say that piling on extra restrictions could force some parents to stop working to care for their kids at home. Even after two public hearings, capitol rallies and a lawsuit, Burnett said child-care providers still say they are having problems with the technology.

The state will pay ACS approximately $1.2 million for 1,815 finger scanners and VeriFone scanners, which resemble credit-card readers, and up to an additional $12.8 million to service the equipment through 2017, a contract between the state and ACS shows.

Burnett calls the way the program is being implemented heavy-handed. Dent's letter advises child-care providers to tell DECCD whether they will continue accepting the low-income subsidies or opt out of the certificate program no later than Aug. 15.

Centers that do not respond by the deadline would be automatically dropped.

Child-care providers have long believed that the finger scanners were a backdoor way to reduce the number of people helped by the child-care subsidy. Dent said that streamlining the payment system would enable the state to help more families.

Burnett calls the scanners a deterrent for parents and child-care centers. "It's a bother that people would just rather not deal with," she said.

If this State has 1.2 million dollars for a "Finger Scanners" , the money could be better spent for reducing the waiting list for parents who are trying to get their children into a child care program. These funds could also be used to address issues to better the quality of life for this population.

Is anyone aware of any situation that would encourage or merit the use of such a sophisticated system?

Today, I heard on a radio talk show, that Former Gov. Barber and Gov. Bryant are supporters of this intevention for DHS and that they are also supporters of the Zerox Corporation. I hope that there aren't any of these hands in the cookie jar.