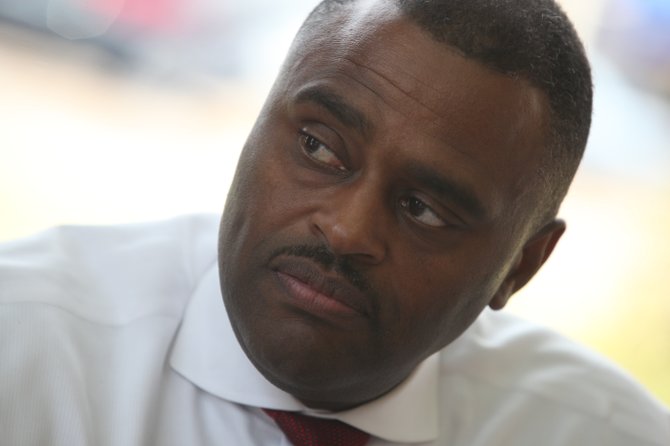 Hinds County Sheriff Tyrone Lewis and other Hinds County officials are playing down recent events at the Raymond Detention Center, characterizing the troubles as part and parcel of the business of running a jail. Photo by Amile Wilson

Hinds County officials are playing down recent events at the Raymond Detention Center, characterizing the troubles as part and parcel of the business of running a jail. On Sunday, a Hinds County SWAT team and K-9 unit responded when 10 to 15 people incarcerated at the county jail exited their cells.

"We're dealing with the same people who rob neighborhoods, and rape and burglarize neighborhoods. They don't have that freedom here," Hinds County Sheriff Tyrone Lewis told WJTV. "They're doing it for attention, to show they can get out because of the malfunctioning and disfunctioning of locks."

Last weekend's incident is the latest in a number of disturbances at the jail. On Thursday, juvenile prisoners flooded their housing unit. That followed a June disturbance in which three deputies were injured, an inmate was stabbed and another died from head trauma caused by another inmate. In June 2012, a 34-year-old man escaped from the detention center. The same month, jail officials mistakenly released a man who was serving a five-year sentence for forgery.

Hinds County supervisors have been wringing their hands over jail conditions for some time now. Last summer, supervisors attempted to pass a resolution to build a new jail, believing the action would insulate the county from lawsuits that arise from lack of maintenance.

In December, supervisors agreed to explore the possibility of privatizing some or all of the jail's operations. Supervisors proposed soliciting cost estimates for a number of options including: building a new county jail, selling the jail, adding capacity by building an additional housing pod, renovating the existing jail, and maintaining and running the facility's day-to-day operations.

Othor Cain, spokesman for the sheriff's office, stressed that although Lewis oversees jail operations, Hinds County maintenance Director Michael Harrington and his boss, County Administrator Carmen Davis are in charge of making repairs at the facility.

"If your question is 'Are there work orders that have not been filled?,' the answer is yes. If you are asking if there's a backlog (of repair orders), the answer would be yes," Cain said.

Cain said the sheriff's department and Davis's office have had "numerous conversations" about the urgency of the jail situation.

"All of the locks were repaired or replaced last summer as identified by the sheriff. The repairs have not been ignored," she wrote.

Lewis said his office would add extra security to the jail for now and would make recommendations to the Hinds County board on how to alleviate problems.

"At the end of the day, the sheriff is responsible for the day-to-day operation and making sure the inmates are safe and their civil rights are not violated," Cain said.