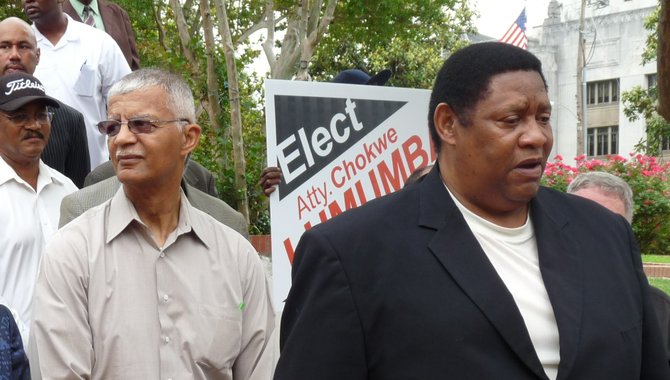 District 5 Supervisor Kenneth Stokes (right) said even though the county has been pouring "millions of dollars" into buying land for the Byram-Clinton Parkway, he has seen little interest from business developers to relocate along the proposed parkway. Photo by Tyler Cleveland 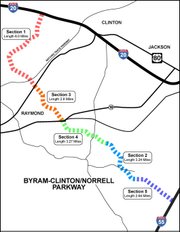 Courtesy Hinds County Board of Supervisors

The Byram-Clinton Parkway is a proposed multi-lane route between Byram at Interstate 55 South, extending northwest to the Norrell Road interchange at Interstate 20 in Clinton.

Is the money being spent on developing a Byram-Clinton Parkway worth it? That's the question District 5 Supervisor Kenneth Stokes asked at this morning's Hinds County Board of Supervisors meeting.

The 18-mile corridor is a proposed multi-lane route between Byram at Interstate 55 South, extending northwest to the Norrell Road interchange at Interstate 20 in Clinton. The corridor will consist of retail, residential and commercial development.

Stokes said even though the county has been pouring "millions of dollars" into buying land for the project, he has seen little interest from business developers to relocate along the proposed parkway.

"This Byram-Clinton corridor has been in the news, but I don't see enough developers at the table," Stokes said.

District 3 Supervisor Peggy Hobson-Calhoun, the board's most ardent supporter of the project, has said the corridor would relieve traffic congestion, promote economic development and create jobs.

Calhoun rebuffed Stokes, saying that federal money has funded most of the work up until now. In September 2011, Hinds County received $1.2 million from the Federal Highway Administration to develop the Byram-Clinton Corridor. The funds will help connect Interstate 20 to Sam Herring Road and provide access to the John Bell Williams Airport and Industrial Park. The supervisors voted in 2010 to earmark $2 million for the project out of $14 million remaining from a 2007 bond issue. Calhoun added that two congressmen, Democratic U.S. Rep. Bennie Thompson and Republican U.S. Sen. Thad Cochran, support the idea.

This morning, the board paid $1.4 million to Brunini, Grantham, Grower & Hewes for legal work related to Bryam-Clinton corridor land acquisition.

Build it and they will come. Developers were eyeing Lakeland Drive 20 years ago.

Stokes actually has a point. That 18 mile stretch is not NEAR any major highway or population center. Hinds County has more pressing issues facing it than pouring $2 million dollars into a parkway to nowhere. Those same funds that were earmarked by the county for that can be redirected to more pertinent areas. You can't compare that proposed parkway to Lakeland dr or to Highland Colony. Lakeland Dr is essentially WITHIN the city and Highland Colony benefits from being in very close proximity to I-55N. The only people who will benefit from that Byram Clinton Parkway are the land owners in that 18 mile stretch. Development hasn't shunned Byram or Clinton because of a Parkway that will go through a mostly unpopulated area. That has to be considered also. Where is the cost benefit analysis? Where are the developers waiting for the Parkway's completion? Why was the City of Jackson not included in this proposed Parkway? As I understand it, Siwell Rd. was to be 4-laned from I-55 S to Hwy 18 as part of the Parkway and it would extend from there to Clinton. The City of Jackson is not included anywhere in these plans yet Jackson residents pay the majority of the County's taxes. I, as a Jackson resident and County taxpayer, do not want my taxes funding a Parkway that will not benefit me as a resident. Jackson was screwed out of their portion of Highland Colony Parkway. This can't happen again!!!!

I think I can translate this into "Kenny Speak" for you guys. "Not enough developers at the table" means "There havent been enough developers at my KITCHEN table figuring out how to funnel some of this money into my pocket. Until that happens Im against this project". We ward 3 residents remember his flip flop on the proposed residential development over here. He was so against it then suddenly "for" it out of nowhere. Stokes hasnt made a "point" in at least 15 years smh

If anything, it looks more like a potential southern bypass, connecting I-20 West and I-55 South, bypassing Clinton, West Jackson, and South Jackson. Are they building the Parkway to interstate standards since it connects to interstates or is it just another 4-lane highway? It would make much more sense if they built it to interstate standards, and it became I-420, since it does not connect to I-220.

I know very little about the history of this project, but I would like to see someone provide a good answer to the objections raised by Stokes. He can be irritating, he can create needless distractions with irrelevant issues... but that doesn't mean that he is automatically wrong.

And in this case, I agree with Knowledge06. Stokes has a point. Before more money goes into this, I'd like to know if there is any real interest among residential or commercial developers.

As for the parkway, the citizens of Byram and Clinton that I have spoken to are enthusiastic about its prospects. While it isn't a long drive, regardless, it is on twisty, two-lane roads and has the more-than-occasional traffic accident. But, they do it in droves, because they avoid driving on Highway 80/Terry Road/Highway 18 unless they have to.

As to the objections that knowledge06 raises: I-220 and Lakeland Drive (back in the day) and the Highland Colony Parkway all were developed in relatively unpopulated areas. And the population and business grew in and around them post-development.

As for SusanM's request for information, I would suggest she reread trusip's post: Stokes essentially feels cut out of this, as does Graham, and they are both seeking ways to make this work to their personal, fiscal advantage. Now that they have two lackeys on the board as well, I'm afraid Mrs. Calhoun is about to be outvoted 4-1 for the next few months.

I don’t believe Stokes’ objection is entirely misguided, either. The cultural, economic, and political landscape of Hinds County has changed dramatically since this project was conceived in the early 90s, and I think it’s fair to question if its still needed, especially in these tight economic times.

The problem is, this train left the station many years ago. Although I personally think it should be built to interstate standards, my understanding is that it will be a four-lane highway with direct access from adjacent properties, precisely so that shops and residential subdivisions can eventually be built along the route (i.e., economic development). Millions of dollars have already been spent on planning, environmental studies, engineering, and right of way acquisition. Many people in Byram and Hinds County are supportive of the route as proposed. I think it would be wasteful and politically foolish to back up now just to entertain Stokes' 11th hour demand to move the alignment into Jackson.

Besides, this project is favored by Rep. Thompson (who probably thinks it will have an ancillary economic benefit to Bolton), which means it isn't going to change just because Stokes thinks it should. And besides, Jackson has a parkway: Metro / Robert Smith Parkway. How has that worked out so far?

@SusanM, I think there is interest in development in this area, as new homes are being built in Byram and some parts of the county (things fell off significantly following the Great Recession), but probably not as much as might have been projected 15 years ago.

Never thought this day would come but I have to agree with Stokes on this one. It seems to me that particular area of the county is doing anything but growing and I cannot really see why a business would choose to locate there when there are much better places. If it's being built for traffic purposes and making a lot of commuters lives easier sure, it makes sense. But if it's being built because someone thinks it's going to become another Highland Colony I think Stokes has a point. Then again if the federal government's paying for it then why not?

I can totally believe the right pockets havn't been lined yet, but I also have to wonder if certain ritzy folks just want an easier route to the airport. THERE sure are a LOT of airplanes in and out of there, even at night. not just tiny ones either. just saying