In Delbert We Trust? 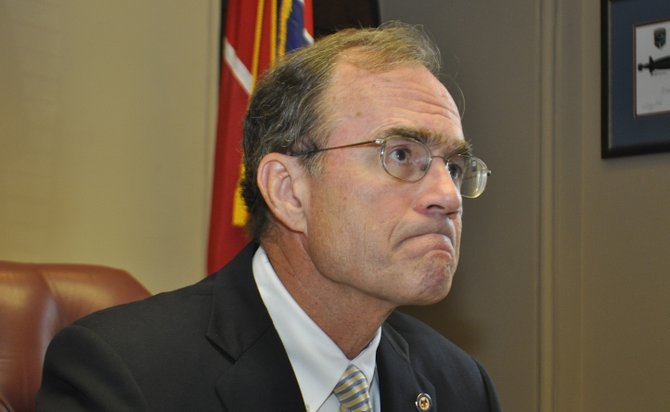 Mississippi Secretary of State Delbert Hosemann expects the state’s voter-ID law top be in effect by the 2014 midterm elections. Photo by Trip Burns

If there existed a university devoted to voter suppression and disenfranchisement before the passage of the 1965 Voting Rights Act, Mississippi would have graduated with Latin honors.

Tactics ranged from the relatively humdrum Jim Crow instruments of the time, such as poll taxes and impossible-to-pass oral tests, to the famously violent practice of murdering voting-rights workers in cold blood. Those practices, commonplace in Mississippi and throughout the South, help usher in the VRA and its primary enforcement mechanism, a federal oversight process called preclearance.

On June 25, the U.S. Supreme Court nullified the formula outlined in Section 4 of the act that determines the cities, counties and states that must receive federal permission to change even minor election procedures.

The ruling in the VRA case, Shelby County, Ala., v. Eric Holder, wasn't terribly surprising given the court's composition. The jurisdictions covered under preclearance—Section 5 of the act—include mostly southern states with a history of racial discrimination affecting elections, but also applies to some northern cities such as New York City and the state of Alaska, with its record of Native American discrimination. The court did not address the constitutionality of Section 5, which means that Congress could develop a new formula that meets constitutional muster.

Civil-rights advocates nationwide let out a collective moan of disapproval believing the ruling will open the floodgates on renewal of voter suppression. That includes voter-identification laws, many of which were held up for preclearance but now can be implemented.

Hosemann, one of the key backers of Mississippi's voter-ID law, is not running a victory lap, yet. In a May interview with the Jackson Free Press, he said that even without preclearance, Mississippi would still have to comply with Section 2 of the act, which bars the state from implementing discriminatory voting laws.

"There's a whole series of things that have impeded people's right to vote and that comes under the constitutionality portion (of the Voting Rights Act). So the preclearance would go away, but individuals who may challenge voter ID would still have the ability to question the constitutionality of it," Hosemann said.

State Sen. John Horhn, D-Jackson, and a member of the state's Legislative Black Caucus, called the ruling "a sad day in the United States" and said he would eat his hat if anyone could prove that voter discrimination is indeed a thing of the past. He dismissed Hosemann's statement that Mississippians trust each other to no longer need the federal check-and-balance of preclearance.

"This will have a chilling effect," Horhn told the Jackson Free Press.

Finally we can leave, can we leave the Old South Behind. We just swore in our 3rd African American Mayor in Jackson. Times have changed..

Once again, than you for the Jackson Free Press.

In Delbert We Trust?

How could we? Why should we? This gentlemen is already celebrating the Voter ID Law to be in place for mid-term elections in 2014.

I think the headline was a little joke. Pretty funny actually.

Delbert looks like a full PacMan with glasses in this pic. ijs

I wonder if Mr. Hosemann would have been as zealous about protecting voter rights without the VRA and the scrutiny of the Department of Justice and leading the way. Because of the VRA, Hosemann has put into place several expensive safeguards to limit disenfranchising legitimate voters--such as equipping clerks' office with cameras and offering transportation to voters who can't get to an office to obtain an ID.

Should we just "trust" that Hosemann would have done those things anyway, simply because they are the right thing to do--at the very least?

Of course, if voter ID were actually about curbing voter fraud at the polls, as Hosemann has claimed, he would have eagerly shown us all those cases that make this legislation necessary. He hasn't, though, which makes the whole endeavor suspect. Unnecessary legislation for a problem that doesn't exist.

Whether you disagree with someone's political views or not, no need to take pot-shots at the man's character. I have known Delbert for 25 years and know him to be an honorable man...PacMan?? if you have to show an ID to cash a check, make a bank withdrawal , get public assistance, get a drink in a bar , board a flight, see a doctor,... showing one to vote to prevent voter fraud isn't big deal in my opinion. Last I heard the Sec of State said they would even provide id's for free and come to your house if you are physically unable to travel to get it. The tired old arguments about voter suppression are just that...tired old arguments past their prime. Move forward It's time to quite living in the past...and yes I know you can't move forward until to recognize the past...we are reminded of that every issue in the editorials of the Jackson Free Press... we do recognize the past because its is kept on the front burner of every issue! I am amazed at how many "dead people" vote every election, not to mention the ones bused to the polls and tutored on who to vote for. Look at the Canton and Hattiesburg elections for enough proof of voting irregularities...... If one trusts the Supreme court to strike down the defense of marriage act permitting same sex marriages (a bill Democrat Bill Clinton pushed for and signed into law), why not trust them to nullify a part of the voting rights act that they feel is no longer constitutional and past its prime? We still have a ways to go as a nation, but at some point you have to trust each other until proven that you can't... Peace

Oh, Dilbert, or Egbert, or whatever...evidence suggests that voter fraud is exceedingly rare, and is mostly caught by existing systems, hence why so little evidence of widespread fraud can be found. These calls for voter ID which will be costly for the state make very little sense, and don't address areas that are much more problematic, like outdated voter rolls in need of purging.

JLucas, please tell us where to find this evidence of which you speak. And explain why you believe voter fraud is acceptable, whether "widespread" or not. And explain why an election lost by one fraudulent vote is an acceptable alternative to having voters show ID at the polls. And, if you plan to recite that tired line about how poor people and black people would be disenfranchised by having to show such proof when we already know these same people have to have that proof to get foodstamps, social security, unemployment, medicaid, or simply to cash their IRS Earned Income Check every year.