JACKSON — The Mississippi Senate had just one piece of legislation on its calendar this afternoon, a bill that would establish charter schools. After about three hours of question-and-answer and debate with House Education Committee Chairman Sen. Gray Tollison, R-Oxford, the measure passed 31-17.

After the vote, Lt. Gov. Tate Reeves, who supports setting up charter schools, said the bill 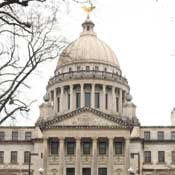 With filing deadlines approaching, state legislators are moving legislation swiftly through the committee process and onto the floor for consideration.

is a part of a large number of measures the Legislature started working on last year toward transforming education in Mississippi.

Blount also unsuccessfully tried to amend the bill to prohibit charter schools and other educational services organizations that contract with the state from making political donations to lawmakers. Blount along with Sen. John Horhn and Sen. Hillman Frazier, both Democrats from Jackson, all voted no on the bill.

"What's this mania about charter schools? It's as though it's going to solve every problem of mankind," Bryan said.