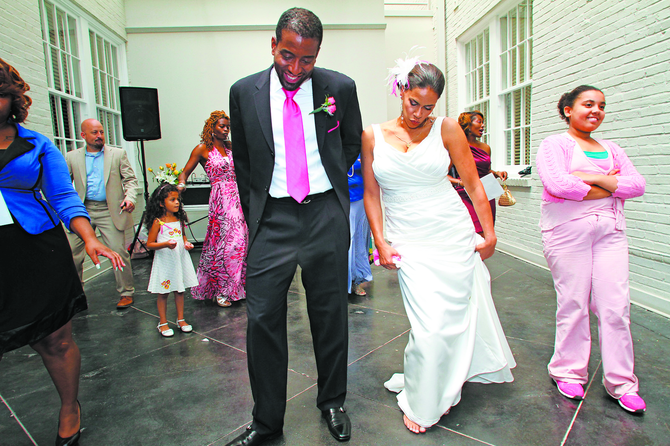 The wedding of Wendy Shenefelt and Michael Fleming paid homage to their passion for education and their heritage. Photo by Charles Smith / Studio Royale

Like so many people who attended the wedding of Wendy Shenefelt and Michael Fleming on a warm August morning, I felt like I had been, in a sense, married into the family with them. That warm feeling is no accident—it’s the product of careful attention to detail. The end result was a service that crossed cultural and generational barriers, creating space for intimacy and warmth within the creatively and historically charged terrain of the Smith Robertson Museum and Cultural Center. It’s not an obvious wedding venue, but for the couple’s purposes, it was perfect. Booking it was the hard part.

“It was under renovation,” Wendy says. “But they let us sneak in and do it anyway. Now that it’s been redone, I would tell anybody it’s a beautiful space to have a wedding.”

Opened in 1894 as the Smith Robertson School, Jackson’s first school for black students, it served them until it was closed in 1971 as Mississippi’s public-school system slowly adjusted to the reality of desegregation. Thanks to the efforts of prominent local educators, it reopened in 1984 as a museum of black Mississippi history. The site’s educational and cultural history made it an ideal fit.

“Education has played an important role in our lives—both how we met and what we have done with our lives,” Wendy says of her relationship with Michael. “We met in junior high school. And since it was a school, and we were both at one time educators, it just felt very natural.”

A Jackson native, Wendy works for the Children’s Defense Fund, an organization Marian Wright Edelman founded as a successor to Martin Luther King Jr.’s Poor People’s Campaign. Michael works as assistant vice-president of academic affairs at Morehouse College in Atlanta, where the couple resides now. Concern for the well-being of children and youth unites them in their shared values, and united the large extended family that attended their wedding.

The minister was no exception. J. David Waugh, former pastor of New York City’s Metro Baptist Church, was a natural choice to preside over the service. Like Wendy and Michael, he dedicated much of his adult life to protecting kids—serving for 12 years as founding director of Rauschenbusch Metro Ministries, a program that focused the institutional power of Metro Baptist Church and the surrounding community on addressing the needs of children living in New York City’s “Hell’s Kitchen” community.

“I wrote a lot of the ceremony myself,” Wendy says. “And David was able to weave all that together for us. He was so open to doing it. I had to let go of certain things—I let my friends take over the decorations and things like that after I gave them an idea of what I wanted to do—but the service was very important to me. So I did spend a lot of time trying to research the pieces that were culturally relevant that also were things that I thought meant something to what we were pledging to each other.”

Groom and wedding party wore their own choice of suits and dresses.

For this, Wendy looked to her mentors. “In Native American traditions, it’s very important to have elders present and participate. Although I am Native American, I do not belong to a tribal group. I have embraced my traditions, and my parents have always exposed me to as much of my Native American culture as they could, but I thought it was important that the three elders in my life—Dorothy (Triplett), Brenda Judin and Carolyn Jolivette—have a part in the wedding.”

Each elder presided over a ceremony. Carolyn Jolivette led the congregation in honoring the four directions, a well-known ritual that is shared by indigenous cultures in almost every region on Earth. Dorothy Triplett, along with the bride’s and groom’s mothers, symbolically united the couple with a blanket ceremony common among many American Indian traditions. And Brenda Judin consecrated the wedding by presiding over the Native American wedding vessel ceremony, in which the bride and groom face the challenging task of drinking from a two-spouted vase without spilling any of the water contained therein.

If any of this sounds complicated on paper, don’t let my description fool you; at the wedding, following along with these traditions was the simplest thing in the world. “My family is casual,” Wendy says. “We wanted people to feel comfortable.”

If there’s a time in someone’s life when someone would be justified in making a self-indulgent display, a wedding would be that time—but Wendy and Michael, along with their minister and elders, gave their loved ones the gift of a communal wedding that brought all of us more fully into their lives, and tethered us all together with the irresistible power of their values.