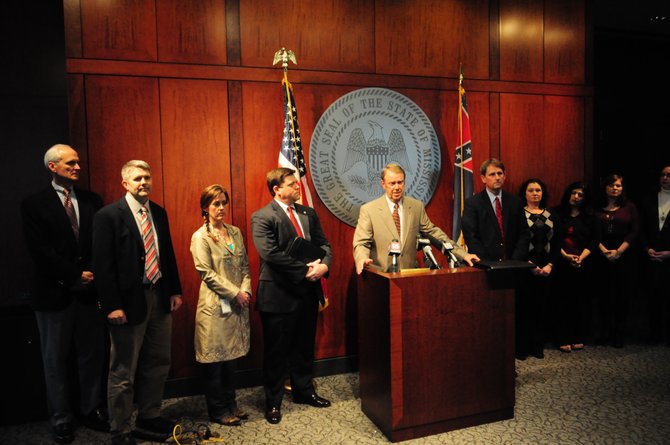 A day after informally notifying Mississippi Insurance Commissioner Mike Chaney of the federal government's rejection of the state's proposal to run a health-insurance exchange, the U.S. Department of Health and Human Services outlined its reasons in a letter to Chaney.

In that letter—signed by Gary Cohen, director of HHS' Center for Consumer Information and Insurance Oversight—the agency cites Gov. Phil Bryant's "stated intent to oppose implementation of a State-based Exchange" and "no formal commitment to coordinate from other State agencies," which Bryant oversees as reasons for rejecting the state's proposal.

The Affordable Care Act, which Congress passed in 2010, requires states to develop an exchange—an online portal where customers can shop for health-insurance plans—or let the federal government set up one on the state's behalf.

Chaney, a Republican now in his second-term as insurance commissioner, started working on the Mississippi exchange more than three years ago, before Bryant became governor. Ever since, Bryant, also a Republican, has vowed to strike down any policy proposal that aids in the federal health law's implementation.

"However, I have said repeatedly that the health-insurance exchanges mandated by Obamacare are not free-market exchanges. Instead, they are a portal to a massive and unaffordable new federal entitlement program," Bryant said in a statement Feb. 8.

"They trigger new taxes on businesses and will ultimately drive more people onto Medicaid rolls. I firmly maintain my position that Mississippi will not willfully implement a mechanism that will compromise our state's financial stability," Bryant stated.

Bryant has ignored non-partisan analyses of what expanding the state's Medicaid rolls could mean. A report issued last year by the state Institutions of Higher Learning concludes Medicaid expansion could mean 9,000 new jobs coming to Mississippi and would cost the state $109.4 million—about one-third the amount Bryant proposed spending on Department of Corrections in fiscal year 2014—through 2020.

At a news conference last week, Chaney said he believes the Obama administration has betrayed him by denying the state's application to set up a health-insurance exchange.

Despite the rejection, HHS did commend Chaney for his office's efforts and left the door open for an exchange sometime in the future.

"Although we are unable to conditionally approve your application at this time, we are impressed by the work you have completed to date," Cohen wrote.

I'd hardly call this a GOP spat. Chaney's independently elected and did his duty. Bryant's being stubborn and this lies clearly at his feet, not at the feet of the MS GOP.

In the end, I hate it for Chaney who has done an excellent job thus far.

Declaring already enacted federal legislation invalid by a governor is neither legal nor a good guiding principle to direct a governor's entire policy platform. This isn't the first time the governor has said he disagrees with the national government and therefore won't abide it. What did he do, drop the history classes right before they took up the civil war?

This is one of those topics I REALLY would love to speak on. But I will keep my peace and let this take its natural course.