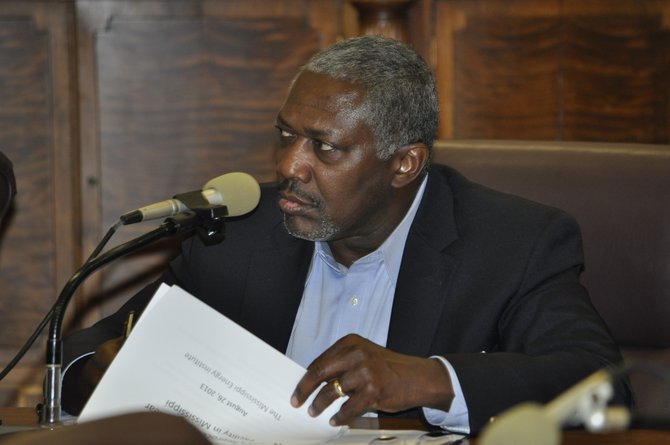 Sen. John Horhn, a Jackson Democrat and chairman of the state Senate Economic Development Committee, called a hearing Monday on a proposal to develop a short-term nuclear storage and a nuclear-fuel-reprocessing facility in Mississippi. Photo by Trip Burns

Building a facility to reprocess spent nuclear-fuel rods to make new nuclear energy could take as much as two decades, but the ball started rolling Monday with a hearing at the state Capitol.

The Senate Economic Development Committee, chaired by Jackson Democrat John Horhn, met for about an hour to hear a presentation from the nonprofit Mississippi Energy Institute about the benefits of locating a short-term storage site for waste from nuclear-power plants and building a nuclear-fuel-reprocessing plant.

Jason Dean, a project consult with the MEI who also works with Ridgeland-based law firm Butler Snow, said in a presentation that such a facility would cost about $25 million but that the project would create about 4,000 jobs and generate $30 million a year in tax revenue. He added that Mississippi taxpayers would likely not have to contribute financially because the federal government has a $25 billion fund intended for the development of nuclear-fuel storage units.

Dean added that the early proposal would not involve long-term geological storage despite the fact that the group touted Mississippi's "unique geologic salt domes," in a published two-page proposal for a "nuclear cluster." He said the nuclear material would only be stored until it could be transported to the federally designated repository at Yucca Mountain in Nevada.

"Yucca Mountain is the law of the land," Dean said during his presentation, referring to the site's congressional designation as the nation's nuclear waste depository.

But for all intents and purposes, the Yucca plan is dead. Congress authorized the Yucca Mountain Nuclear Waste Repository in the late 1980s and has spent billions constructing the site. The proposal has run into numerous regulatory and political hurdles in recent years. Democratic Majority Leader U.S. Sen. Harry Reid of Nevada has strongly objected to the project. President Barack Obama, who advocates an all-options-on-the-table energy strategy that includes nuclear, and has a razor-thin majority in the Senate, has removed Yucca funding from the federal budget, effectively killing the project for the time being.

During his presidency, Jimmy Carter banned nuclear reprocessing because he believed the process, which involves extracting plutonium, is tantamount to nuclear-weapons proliferation. In the meantime, nuclear power plants such as Entergy's 1-gigawatt Grand Gulf Nuclear Station near Port Gibson have no place to take the radioactive fuel rods. Grand Gulf stores its spent rods in 17 above-ground dry casks on site. Approximately 140 such sites exist in the United States.

"Interim storage is going on; we just want to bring in more of it," Dean said.

That idea does not sit well with environmentalists such Louie Miller, president of the Mississippi Sierra Club. Miller noted that Grand Gulf has had problems with tritium, a byproduct of nuclear-power generation, leaking into water supplies. He worries about the environmental effects of bring more nuclear waste into the state.

Energy Institute officials said federal regulators are looking to designate at least two short-term dumpsites and that Mississippi is competing with South Carolina, Idaho, Texas, Kentucky, New Mexico and Nevada to host one of those sites.

Horhn, the Senate committee chairman, said he had not formed an opinion on the matter and characterized the purpose of the hearing as fact-finding in the event legislation related to the project is filed in the 2014 legislative session.

Despite blasting the Obama Administration for putting the brakes on Yucca Mountain, Republican U.S. Rep. Steven Palazzo sent a strong message of opposition to any proposal of storing more of the nation's nuclear material in Mississippi. In a statement sent out while yesterday's Senate hearing was under way, Palazzo said:

"Whatever plans are brewing for a possible nuclear waste facility, I think now is the time to send a clear message: No nuclear waste in Mississippi. Not now, not ever."

Please, MS Senators and Representatives, get back to work on expanding Medicaid, improving our schools without taking money from the public to give to the private (Charter Schools), accepting the fact that the Affordable Care Act has been approved by the Federal Courts and you must address that fact, and lastly, get busy working on the acceptance of clinics in this State that provide total helath care for women.

This state has enough KILLERS. We don't need to become a dumping ground for any more waste.

A couple of errors in this account. Under the Carter administration the AEC was split into the DOE and NRC. The NRC regulates commercial nuclear facilities and the DOE regulates government nuclear facilities. This was the Atomic Energy Reorganization Act of 1974. Commercial recycling of nuclear fuel assemblies was forbidden under the 1974 reorganization. The DOE was mandated to take custody of all commercial nuclear fuel assemblies for recycling by fiscal year 1998.
To date, the DOE has not taken custody of commercial spent fuel thus high cost on site storage has been required. The facility built with recycling commercial fuel (Purex Plant at the Hanford Site in Washington) was supposedly mothballed by executive order in 1989 after the Berlin Wall fell. It ended up being a hulking relic of a Superfund cleanup site and totally non functional. We need recycling of used nuclear fuel bundles instead of warehousing in deep WIPP like projects. So much waste. A used commercial fuel bundle contains a lot of usable fuel but cannot be used due to a buildup of byproducts. What would make more sense is to recycle the bundles into mixed oxide fuel then only the byproducts that poison the fission reaction would need disposal. Recycling would reduce the cost of nuclear fuel assemblies and reduce the volume of high level radioactive waste requiring permanent safe storage.