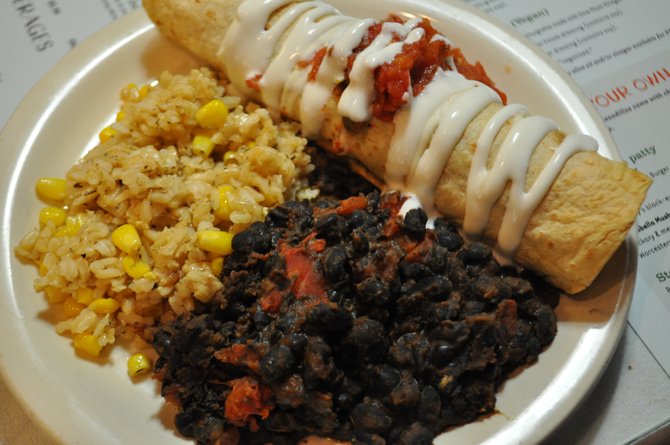 High Noon Cafe’s vegetarian dishes can be treats for anyone. Photo by Trip Burns

Contrary to popular belief, eating a non-meat diet isn't hard. As a vegan, I frequently stop by Rainbow Co-Op and High Noon Cafe (2807 Old Canton Road, 601-366-1602). If you're a vegetarian or vegan new to Jackson, Rainbow and High Noon are about to become your best friends. High Noon's vegan chocolate cake is absolutely to die for. Many of my omnivore friends even prefer it to the traditional version. If you're looking for a full meal, Chef Troy Woodson cooks up a "good burger" that lives up to its name.

If you like Portobello mushrooms, visit Broad Street Bakery (4465 Interstate 55 N., Suite 101, 601-362-2900). Its "Portobello Vegetarian" is only $9.50, and vegans can simply order the dish without goat cheese. Broad Street also has an array of salads, soups  and pizzas.

What is the best vegetarian or vegan dish at a non-vegetarian restaurant?

Duan Carter Mapo Tofu at China Express in Clinton—but if you don't like some spicy hot food, it's not for the timid.

Gigi Carter Veggie burger at BRAVO! Hands down, the best!

Chelsea Johnson Stewart Veggie burger at Froghead in Clinton is good! (It's not on the menu so you have to ask for it.)

Jesse Crow M!SO has a few vegan offerings, marked on their menu—a soup, a salad, a couple sushi rolls, I do believe. Their veggie roll is incredible.

Stacey Aldridge The country-fried tofu at Ding How is amazing.

Laurin Stennis As an ex-pat, I'm in need of some serious updating. But a standby for me when I'm in town is a veggie half 'n' half from Keifer's.

Amanda Hodo The veggie plate at Mecca was the best. Coconut soup at Thai House. Veggie Plate at Aladdin.

Kate McNeely BRAVO! is actually the most accommodating. Matt (Mabry) is their sous chef, and the second we walk in he starts whipping up something fabulous and vegetarian—and it's never a salad. Also, Nicks is great, plus Aladdin's and Walker's.