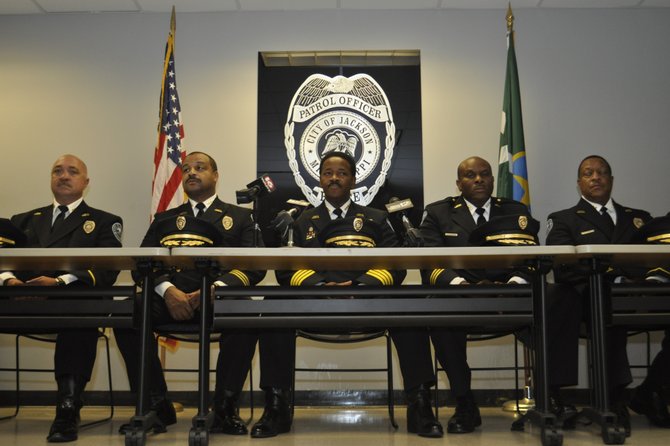 Four police commanders and a detective huddled inside a doorway Thursday afternoon at Jackson Police Department headquarters to catch a breeze as they waited for COMSTAT, the weekly crime-reporting meeting, to begin.

The building's air conditioner is broken. According to a sign posted in the elevator, newly appointed Chief Lindsey Horton has ordered a replacement part, which will take at least a week to arrive. In the meantime, JPD personnel are allowed to bring fans from home.

When Horton arrived, he stood in front of his new command staff, no longer wearing the blue dress uniform that he wore during a press conference earlier in the day, and instructed his staff that being casual is a thing of the past.

Horton, 61, who has known Lumumba for four decades, said one of his top goals is to improve JPD's image in the community.

"A uniformed police officer is the most visible element of government in any municipality," Horton told the Jackson Free Press this morning. "We should project ourselves and speak in the vernacular that professional officers should speak ... and not the vernacular of thugs on the street."

Horton believes his new command structure will help to that end. Unlike his predecessor, Rebecca Coleman—whose lone assistant chief, Lee Vance, had to handle most of the day-to-day operations of the department—Horton will have two assistant chiefs. Vance will remain as assistant chief of patrol and investigations, and Calvin Matthews will come out of retirement to serve as assistant chief for administration.

Two other formerly retired commanders will also have roles on Horton's executive staff. They are Dwayne Thomas, who will take over as deputy chief of administrative support, and Herious Cotton, who will be deputy chief of technical services. Horton is keeping the precinct beat structure that Coleman put in place, which included grouping the city's four precincts into two districts, each with a district commander.

Horton issued a directive for patrol officers to get off the city's major arteries and raise JPD's visibility in neighborhoods, which he said would help deter crime. Based on the weekly numbers, overall major crimes continue to drop, although the number of violent crimes has inched upward over the last year.

Chief Horton might want to have a few of his officers check the handicapped parking spaces at the I-55 Target store every few days when they drive by because almost every time I am there, a high-end luxury car or truck is parked in these reserved spaces with no handicapped license plate or rear-view hanging placard, as required by law. And they are almost always from Madison County!