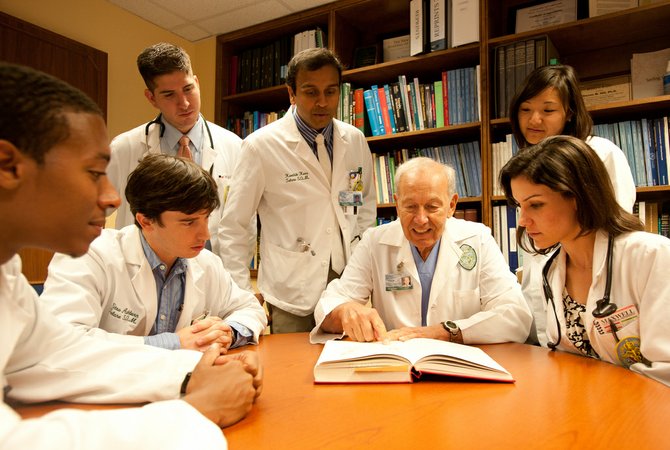 Under the Affordable Care Act, millions more people with insurance may be headed to the doctor's office. That means the medical system will need more doctors, nurses, physician assistants and other healthcare workers to meet the demand. Photo by Courtesy Tulane Public Relations

Michael Ellison has a tough assignment.

He's the associate dean of admissions choosing the first class of a brand new medical school, the Frank H. Netter MD School of Medicine at Quinnipiac University in Connecticut. It's a school with a very specific mission: minting new doctors who want to go into primary care practice.

Under the Affordable Care Act, millions more people with insurance may be headed to the doctor's office. That means the medical system will need more doctors, nurses, physician assistants and other healthcare workers to meet the demand. Quinnipiac is spending $100 million on the new school, and it is one of about a dozen new medical schools on the horizon. A few of these new schools will also be focused on primary care.

To tackle these challenges, Koeppen says it's important to admit the right students to the program. He cites demographic data that show who is more likely to choose general medicine.

David, a 35-year-old pharmacist who has applied for the fall semester, fits into that second category. (He asked that we not use his last name, because his employer doesn't know he's thinking of a career change.)

In his interview with Ellison, David described wanting to have a greater impact on patients' lives, such as calming a child who is anxious during an exam or bringing a patient's heart rhythm back in an emergency. "These moments weren't available to me within the context of pharmacy practice," David said.

In addition to career changers like David, Koeppen says students who are first in their families to go to college and students who've come from medically underserved areas are more likely to pursue primary care.

Henry Sondheimer of the Association of American Medical Colleges says that it's good to be clear with your applicants on the front end.

"To the extent that you clarify your mission to your students who apply and, most importantly, when they interview, so they get to see what you're doing and what you're looking for, then you will find the students who will fit your mission," Sondheimer says. "This is not for show. I think this is a very important, and very serious, effort by these schools."

The question is, can it work?

Kevin Dorsey says it can and it does. He's the dean of the Southern Illinois University School of Medicine in Springfield, Ill. His school started in the 1970s with a specific mission that still guides it - the school wants students who will stay in central and southern Illinois when they graduate, because that part of the state needs doctors.

"I think we take, through a holistic admissions process, people that we think would be a good fit for this region," Dorsey says. "They are of and from the region, they know the values of the area, we train them here, and they gravitate back."

"These students are farmed out back to local communities to work with a family medicine physician in that community, and so they eat, drink and sleep family medicine for about a month," Dorsey says.

That's a strategy that Quinnipiac also aims to try - in part by sending its students out regularly to spend a day with primary care doctors. And Koeppen says he hopes that strategy works, because he's got an ambitious goal. Nationally, about a third of graduating doctors go into primary care and stay there; Quinnipiac's goal is for 50 percent of its graduates to stay in primary care.

This story is part of a collaboration that includes WNPR, NPR and Kaiser Health News.