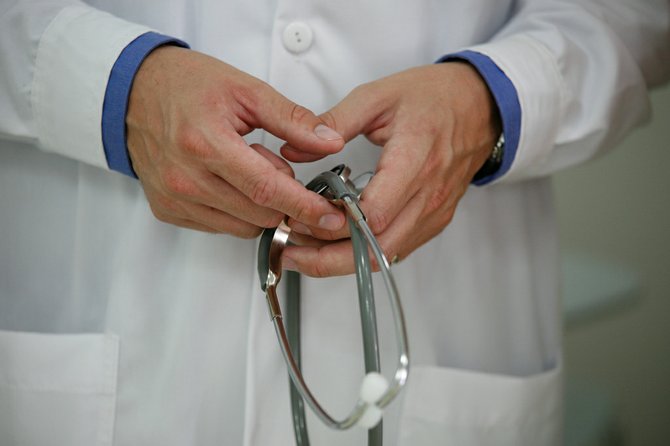 The national shortfall of family doctors, pediatricians and other generalists is expected to reach 52,000 by 2025, according to a study published last year in Annals of Family Medicine. Photo by Courtesy Flickr/Alex E. Proimos

This story was produced in collaboration with The Washington Post.

BLACKSBURG, Va. -- With a tradition more than 100 years old, osteopathic physicians are hardly the new doctors in town. But the profession's recent growth -- in both training facilities and number of graduates -- could help reverse a looming shortage of primary-care providers that experts say will hit rural communities especially hard.

The national shortfall of family doctors, pediatricians and other generalists is expected to reach 52,000 by 2025, according to a study published last year in Annals of Family Medicine. (This study estimated that there were about 209,000 physicians delivering office-based primary care in 2010.) And only 9 percent of physicians practice in rural areas, where 20 percent of the U.S. population lives, according to a 2011 report from the Department of Health and Human Services.

"That's where osteopaths have been largely helpful - in primary care and especially for those in need," said Brock Slabach, senior vice president for member services at the National Rural Health Association.

And their footprint appears to be growing.

Some of that increase is a result of greater acceptance of doctors with osteopathic backgrounds. Although their four-year training includes much of the conventional instruction that medical doctors, or MDs, receive, it also has a heavy focus on the musculoskeletal system and includes a technique called osteopathic manipulative treatment, similar to chiropractic and massage therapy. DOs spend the same amount of time in residency programs and also are required to take board exams for certification.

Until the 1980s, osteopathic doctors often practiced in separate hospitals and clinics; today, that is not the case.

"When I went to school, this was a minority profession that folks didn't know anything about," said Stephen Shannon, president of the American Association of Colleges of Osteopathic Medicine.

There are other reasons for the increase, too. Osteopathy programs historically have attracted more older applicants and career changers than MD programs, and recruit applicants in rural locations. The schools are also slightly less expensive and less competitive than many MD programs, though they generally require applicants to take college pre-med classes and the MCAT, or Medical College Admission Test.

Many osteopathic medical schools are springing up in off-the-beaten-path locations - usually to recruit applicants from rural areas and then hope those doctors practice where they grew up.

Take the Edward Via College of Osteopathic Medicine. Founded in 2003, the 1,100-student campus is located in the Blue Ridge Mountains in Blacksburg, Va.

James Wolfe, president of Edward Via, said, "Our philosophy is 'Recruit from, educate in, return to.'"

Kari McCoy, a second-year student at Edward Via, fits the profile. She grew up in nearby Floyd, Va., a mountain town with a cluster of country stores around its main intersection, and she hopes to return there to practice preventive medicine when her training is completed.

McCoy, 27, previously a nurse, said Floyd residents can't always get the care they need because local hospitals and private clinics are often crowded or understaffed.

Like many of the communities that dot the Appalachian Mountains, Floyd also has high rates of chronic illness such as heart disease and diabetes. While the location of Edward Via's campus was one reason the school appealed to McCoy, she was also attracted by osteopathy's focus on primary care and prevention, which she believes can help address the needs of her home town.

Reid Blackwelder, president-elect of the American Academy of Family Physicians, a medical society whose members include both MDs and DOs, said the osteopathic philosophy, which dates to 1874, might help explain why 60 percent of new osteopathic medicine graduates gravitate toward primary care, compared with 24 percent of their MD counterparts, many of whom face larger student loans and seek high-paying specialties such as surgery and cardiology.

Hospitals and doctor groups no longer view DOs and MDs differently with respect to primary care, said Cody Futch, senior director of recruiting at the physician employment firm Meritt Hawkins. As a recruiter, he finds that osteopathic physicians generally have the same job opportunities and salaries as medical doctors.

But Futch also acknowledged that in specialized fields such as surgery and cardiology, MD-run practicies might still hesitate when considering how patients will react to the degree. "There is still a little bit of bias by some people, but even that seems more rare," Futch said.

David Danner, a graduate of Edward Via's debut class, is a family physician in Stuart, a working-class town not far from Blacksburg.

About 20 percent of the population in the surrounding county relies on Medicaid, the state-federal health insurance program for low-income Americans.

Raised on a chicken farm in North Carolina, Danner said he was drawn to osteopathic medicine because of its focus on rural communities and because he knew that DO schools often accepted older students transitioning to a second career after working in textile manufacturing.

Danner, 38, works in one of the town's two clinics, but he wears several hats: He treats 20 patients per day at his office, as well as inmates at a nearby jail and football players at the local high school.

Danner said he makes a good living and is able to practice the "whole-patient approach" he was taught at Edward Via, including manipulative treatments for back pain and muscle tension. He said the three other physicians in his practice, all MDs, also keep up with the latest research and aren't always stretched too thin.

"I think there's a misconception. Just because health care is less [available] in underserved areas doesn't mean providers are underproviding," he said.